More revelations in the pipeline - will any of it make any difference to the Republican Mindscape? What do you think guy?

I think he planned it with the help of Russia. We know he’s a criminal and he’s selling out our military in exchange for money to countries who want protection. That’s mob behaviour on a global scale.

Maybe T rump has been secretly killing off opponents all along.

How many of his political enemies have died in the last few years, from “natural” causes?

Mriana: We know he’s a criminal and he’s selling out our military in exchange for money to countries who want protection.

US taxpayers have been funding our military bases (500 of which are abroad to protect allies) to the tune of $150 billion a year. Trump wants those allies (NATO in Europe, Saudi Arabia, South Korea, Japan, etc.) to start picking up their share of the tabs.
timb January 15, 2020, 4:30pm #5

He classically blames political opponents for bad things he, himself, has done. (aka Freudian projection) So?

Below was lifted from your link, Tim. Trump did not suggest that the Clintons killed anyone.

The White House Pool report as provided to PoliticusUSA reported:

Asked again if he believed the Clintons had anything to do with Epstein’s death, he said he didn’t know. Then he talked about Epstein’s private island, where allegedly “bad things” happened
“Did Bill Clinton go to the island?”

The thing about T rump is he says one thing, then says the opposite at another time (maybe even in the next sentence or two.)

That the way Trump is, Tim. He is not a potato farmer from Kansas. The good folks in the heartland say what they mean, and mean what they say. In New York, hustling is the American way. Are you quick on your feet? Can you hit the floor running? Or are you a guy who gets it after your head hits the floor?

I’m not a frickin’ liar, like T rump, if that’s what you’re getting at. 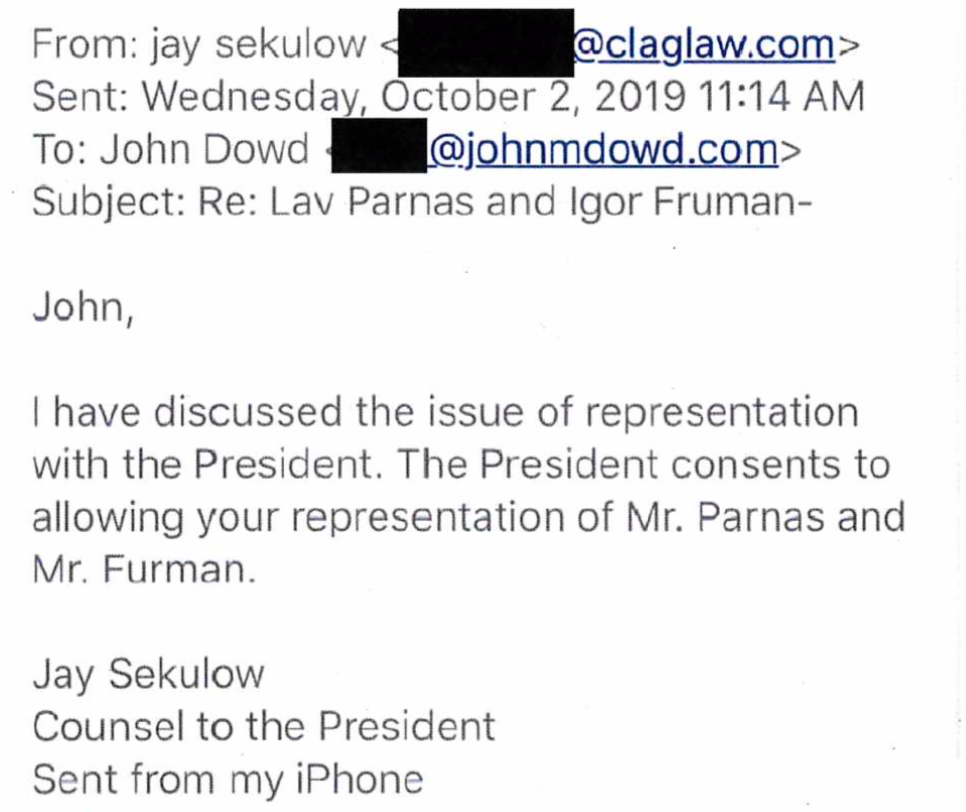 Sekulow is one of T rump’s defense lawyers in the Impeachment trial. In the memo above, he is arranging legal representation for the goons (Lev and Igor) working with Giuliana, with escapades in Ukraine, with the explicit consent of T rump.

Then there was Yuri Lutsinko, Prosecutor General for Ukraine in the previous corrupt govt administration. Lutsinko demanded that Yosonovitch (our ambassador there) to be fired. (Probably because she was rooting out his corrupt ass.)

Lutsinko was willing to get dirt on “B” (maybe Biden or Burisma) if Lev could get her out of the picture. It was not clear what they intended to do to get rid of her. But she was eventually ridiculed and fired by T rump.

Look further down in the link, and see the messages between Lev Parnas and Robert Hyde (the Republican candidate and T rump donor) that imply they were considering doing something (possibly even murderous) to get rid of Yosonavitch. https://www.vox.com/2020/1/14/21066219/impeachment-lev-parnas-evidence-ambassador

T rump is a mob boss.

Sree, the U.S. military is the U.S.'s and shouldn’t be sold to others. However, the U.S. budgets more money for their military than any other country. The U.S. is a war machine and the budget should be cut, especially if we are to grow and not be a primitive and barbaric culture.

Mriana: Sree, the U.S. military is the U.S.’s and shouldn’t be sold to others.

The US Military was already deployed in foreign countries all over the world before Trump came into office. Do you think he can shut down all 500 foreign bases and get all our 200,000 troops back? He would like to if he could. John F Kennedy tried to shut down US involvement in Vietnam. Look what happened to him.
timb January 16, 2020, 3:01pm #12

Ukraine announced it will investigate the possibility that Yosonavitch was illegally surveilled. Meanwhile what passes in name only as the DOJ of the US and its T rump asskissing “attorney general” are not interested in investigating illegal activities by T rump associates. 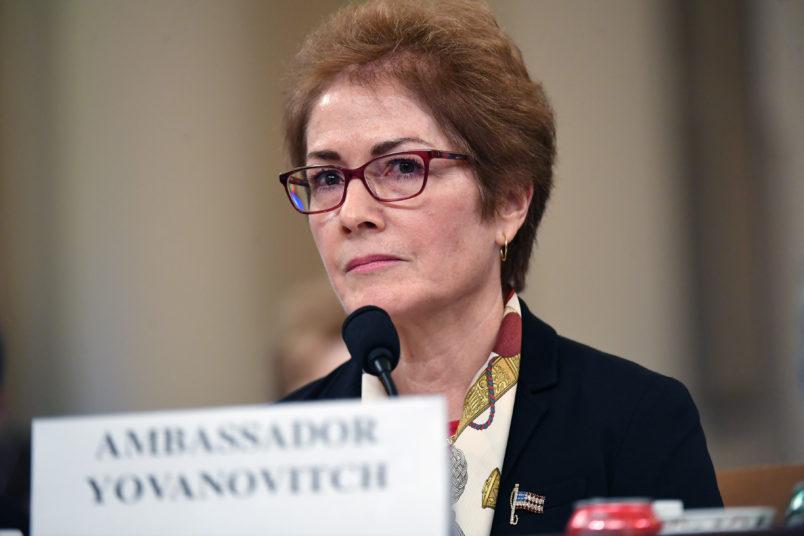 "The (Ukraine) ministry asserted that while Ukraine’s position is “not to interfere in the domestic affairs of the United States,” the documents Rudy Giuliani associate Lev Parnas provided to the House Intelligence Committee “contain a possible violation of the law of Ukraine and the Vienna Convention on Diplomatic Relations, which protects the rights of a diplomat on the territory of the foreign country.”

“Ukraine cannot ignore such illegal activities on the territory of its own state,” the ministry said of the documents, which revealed that an American landscaping contractor named Robert Hyde had repeatedly sent Parnas texts informing him of Yovanovitch’s movements last year."

You guys give him too much credit. This exchange had nothing to do with Trump. This was a couple of sycophants playing make believe about what they might do to make Trump happy. Trump is a moron. In other testimony by Lev he tried to fire her about a dozen times at one dinner, being told each time that he couldn’t, getting angrier each time he was told he wasn’t the king, just a guy. He doesn’t plan, he reacts. And when he doesn’t get his way he broods and whines. Saying that Trump may have been looking to have her assassinated is as ludicrous as saying a 2 year old was planning to assassinate someone. Neither has the mental capacity necessary. The only reason he ordered the assassination of the Iranian general is because he ordered it off a menu read to him. He picked a number off the menu and other people made their own idiotic plan happen. But that was officials telling him “You can do this”, it wasn’t him saying, “I want this done.”

What this is far more likely to be is just some Trump loyalists big-boy playing at spy. I’ve seen this among idiots I actually know, though I confess, I’ve never seen it among government officials before. But then Trump does hire “the best people”. Of course, what they’re “the best” at is failing at their duties, destroying the agencies they’re put in charge of, being investigated by law enforcement and the new hobby that’s sweeping Washington and the Trump administration right now, indictment collecting. I don’t think these two idiots had any intention of actually going through with a murder. This was a fantasy they were playing out, pretending to do “spy stuff” and feeling all cool and important at the potential power they imagined having. And I am as sure that Trump had nothing to do with it as I am there are no gods or magic.

We all like to see Trump as this sinister bad guy, and to an extent he is. But we need to be realistic. He’s no “evil genius” here. He’s not playing chess, or even checkers. Maybe Candyland, at best, but there’s counting in that, so probably not. He’s just a plain old regular self-absorbed asshole, but with power and the IQ of a broom closet.

Wid, I think of T rump as a political idiot savant. He has a superpower of being able to scam enough of our population in to worshipping him. Using the Presidency, this has become a superpower. IQ is not everything. He has been underestimated to our own detriment.

The lackeys doing what they think would please T rump, they do because they got the idea from him, that it is what he wants. And in many cases, I think that he directed them to do the things they have done.

Oh, I have no doubts that he literally and repeatedly directed people to break the law many, many times. Just never for anything that took more than half a dozen words strung together as instructions.

Like when he told the generals briefing him on Korea, that Seoul, a city of many millions, had to move. He asked "Why is Seoul so close to the North Korean border?”

Exactly. The man is an idiot. IF he were ever involved in a plot to assassinate someone his part in the plot would be saying, “I want her dead!” The sycophants around him would do the rest. And for all his faults I don’t see him actually being that evil to actually order the executions of people he doesn’t like. With the general he didn’t order an execution, he chose an option. Of course it was the most extreme, stupidest option on the menu. That’s his thing.

He literally has the emotional maturity of a young child. Everything is about him and what he wants. But what he wants more than anything is for people to say nice things about him. Without the enablers that surround him all the time Trump is really just a big pussy. Anything and everything he does that looks halfway intelligent or organized was planted in his head by the people around him. His immigration policies came from Stephen Miller, for example (was it Lausten I learned that from? Yes! The Frontline episode!). Miller knows exactly how to manipulate him. If he’s going to do what Miller doesn’t want then Miller just starts planting the right stories, articles and “facts” until something racist sprouts. And that’s how most of what he does actually happens. The ONLY things that actually come from him are the policies by 3AM poop tweet that nobody saw coming. The things that make no sense. The things that he sometimes has to back away from because Republicans stop saying nice things about him until he does.

Some recently released Parnas documentation, shows T rump saying “I want her gone.” apparently speaking of Yovonavitch. He did not say “I want her dead.” as you suggested he might if he wanted someone assassinated.

All that you say about T rump seems accurate to me. Yet he remains the most powerful “man” in the world. And his power continues to grow.

Do you really think Trump meant to say Seoul has to be literally moved?
next page →