Axios: Trump tried to pull troops from around world after election loss

… John McEntee, one of Donald Trump’s most-favored aides, handed retired Army Col. Douglas Macgregor a piece of paper with a few notes scribbled on it. He explained: “This is what the president wants you to do.”

It was Nov. 9, 2020 — days after Trump lost his re-election bid, 10 weeks before the end of his presidency and just moments after Macgregor was offered a post as senior adviser to acting Defense Secretary Christopher Miller.

As head of the powerful Presidential Personnel Office, McEntee had Trump’s ear. Even so, Macgregor was astonished. He told McEntee he doubted they could do all of these things before Jan. 20. …

And then what? Come calling for the US to help when those areas flair up again/more?

… I wonder why he didn’t want to pull out of the Pacific?

“And then what? Come calling for the US to help when those areas flair up again/more?”

Who has asked for help before? We don’t need US soldiers to interfer in other countries affairs

“And most likely the start of WWIII………, Apocalypse!”

Why? The USa would be less hated as they are now around the world.

US imperialism suddenly became a good thing to liberals when Trump spoke out against it.
sabolina May 23, 2021, 4:45pm #9

To my friend C Citizen

I see where you get your talking points Sabolina. No substance, just telling you what you should think.

@Lausten. Yeah, the thought of Barbie and Ken cheerleaders came to mind.

@#344215. Sure on the face of it, it’s a wonderful idea. Especially if thought out and details negotiated among the relevant nations. But to do it out of some thoughtless tantrum, to piss off his enemies. That sort of plan we can expect from that drunk talker at the bar who’s not responsible for anything, but President of the US?

Now to bring this back to the issue at hand 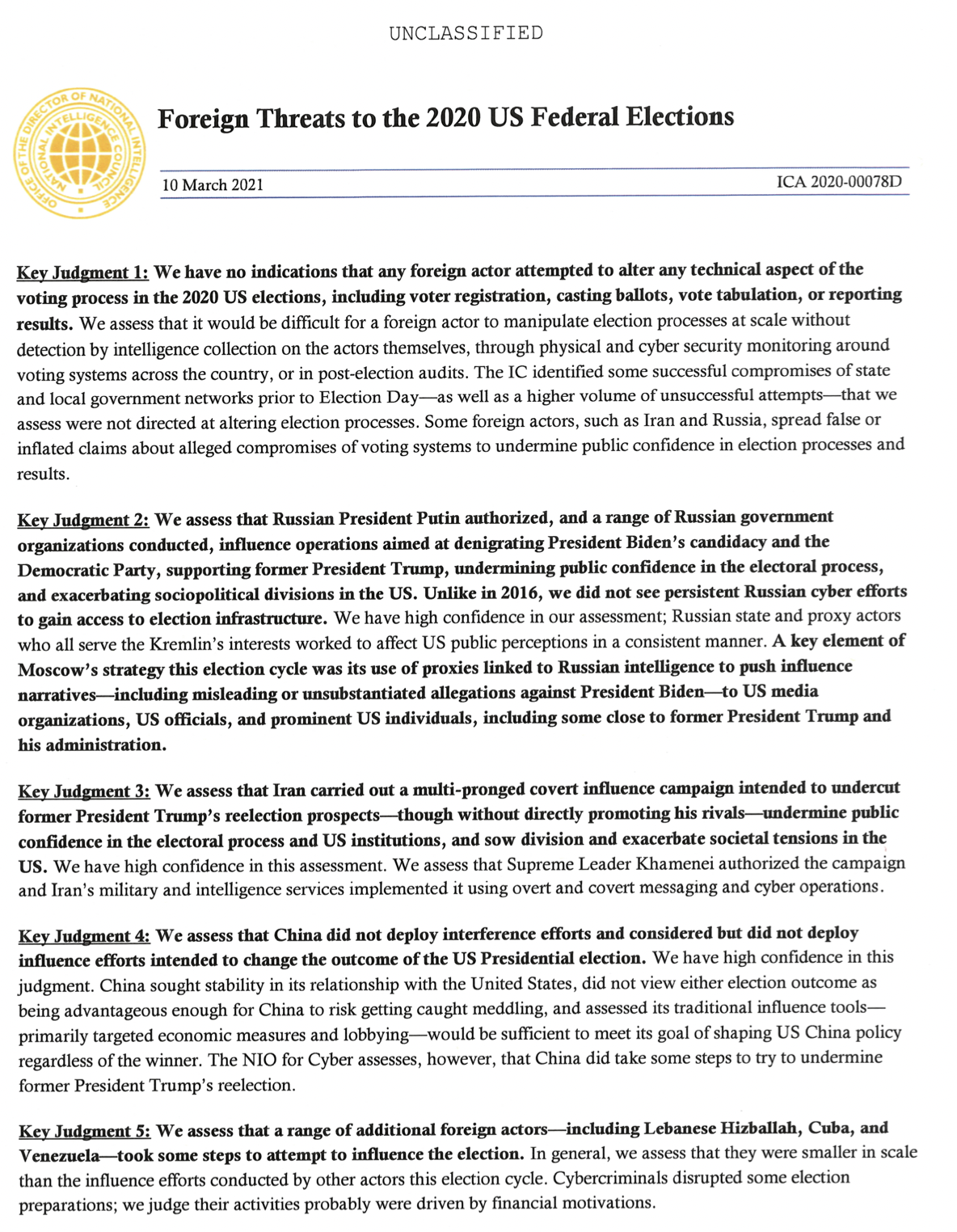 For a little followup on that,

The intelligence community’s assessment raises some difficult questions for Trump and Giuliani, but they’re not the only ones in an awkward position.

But Rudy Giuliani wasn’t necessarily Andriy Derkach’s only point of contact. In fact, his name may be familiar to regular readers.

It was last year, for example, when we learned that Derkach claimed he fed information to Sen. Ron Johnson (R-Wis.), who was searching for anti-Biden dirt ahead of last fall’s elections.

Asked last summer whether he’d possibly relied on information from pro-Kremlin Ukrainians, the Wisconsin Republican appeared reluctant to answer, saying only that he and the Senate committee he led “are getting information from a variety of sources.”

According to a transcript from the closed-door discussion, Nunes didn’t want to answer.

Giuliani spent months explicitly arguing that Biden’s son Hunter had engaged in dubious activity while serving on the board of a Ukrainian energy company. This claim was fact-checked over and over again, particularly as Trump faced impeachment for his efforts to pressure Ukrainian President Volodymyr Zelensky to announce an investigation of the Bidens. At no point did credible evidence emerge to suggest that the core claims being rigorously promoted by Giuliani and Trump were accurate. Giuliani nonetheless continued to hammer on the allegations, repeatedly insisting that he had provided or would provide evidence to prove wrongdoing. …

The FSB directly operates disinformation outlets. SouthFront is an online disinformation site registered in Russia that receives taskings from the FSB. It attempts to appeal to military enthusiasts, veterans, and conspiracy theorists, all while going to great lengths to hide its connections to Russian intelligence. In the aftermath of the 2020 U.S. presidential election, SouthFront sought to promote perceptions of voter fraud by publishing content alleging that such activity took place during the 2020 U.S. presidential election cycle.

NewsFront is a Crimea-based disinformation and propaganda outlet that worked with FSB officers to coordinate a narrative that undermined the credibility of a news website advocating for human rights. Part of NewsFront’s plan was to utilize Alexander Malkevich, who is also being re-designated in today’s action, to further disseminate disinformation. NewsFront was also used to distribute false information about the COVID-19 vaccine, which further demonstrates the irresponsible and reckless conduct of Russian disinformation sites.

The Strategic Culture Foundation (SCF) is an online journal registered in Russia that is directed by the SVR and closely affiliated with the Russian Ministry of Foreign Affairs. SCF is controlled by the SVR’s Directorate MS (Active Measures) and created false and unsubstantiated narratives concerning U.S. officials involved in the 2020 U.S. presidential election. It publishes conspiracy theorists, giving them a broader platform to spread disinformation, while trying to obscure the Russian origins of the journal so that readers may be more likely to trust the sourcing.

The GRU operates InfoRos. InfoRos calls itself a news agency but is primarily run by the GRU’s 72nd Main Intelligence Information Center (GRITs). GRITs is a unit within Russia’s Information Operations Troops, which is identified as Russia’s military force for conducting cyber espionage, influence, and offensive cyber operations. InfoRos operates under two organizations, “InfoRos, OOO” and “IA InfoRos.” InfoRos used a network of websites, including nominally independent websites, to spread false conspiracy narratives and disinformation promoted by GRU officials. Denis Tyurin(Tyurin) held a leadership role in InfoRos and had previously served in the GRU. …

@sabolina, it’s true enough that fast talk can help you to ignore the evidence. But, it won’t make the evidence go away.

“@sabolina, it’s true enough that fast talk can help you to ignore the evidence. But, it won’t make the evidence go away”

Do kyle and Krystal have a point? Was it a good thing that biden did not place sanctions on Putin’s buddies?

@sabolina, they were a couple jokers.

If you think they had a point, how about you quoting it for me. Then perhaps we can discuss it. I heard nothing but a couple clowns repeating trivial tactical talking points to manipulate emotions, nothing else!

Certainly not any news,

Trying to score points according to a code you can only learn via NeewzMax and Faux?

Please, what’s the score, and how does each side make points?

Surely you would have said something if trump refused to sanction putins buddies over the Nord Stream 2 pipeline?

Nord Stream 2 pipeline is a very sensitive subject in Europe as European countries needs it, specially Germany. Gaz is an ecological way to get energy, much better than fuel or coal.

To my friend Citizen. Did you like the part in Kyle’s video in # 344492 when he brought up the time Mitt Romney was laughed out of the presidential debates when he claimed Russia was THE number 1 threat to the USA , with the classic Obama comeback “ what that? I can hear the 80’s calling. They want their foreign policy back”

What is it you’re after?