War Drums in the Ukraine ...

You mean, surrender? Putin has no interest in negotiation. He wants Ukraine.
What is it about that fact you do not understand?

Putin has no interest in negotiation.

So you say. You know everything

So you say. You know everything

I know what I see and I see Russian troops on Ukrainian soil and the country being pulverized into rubble. and dead bodies lying in the streets of Ukraine.

WHAT DO YOU SEE???
Who do you think should give up their activities in this one-sided conflict?

You are clearly a Russian shill. I have never seen such a twisted truth as you so shamelessly spout.
You are doing Putin proud!

They will however oppose parents who try to introduce religion and social concepts that promote discrimination into the classroom.

Nothing wrong with keeping schools secular or stopping discrimination.

Russia is also destroying the Ukraine and killing babies and children.

100% agree. Putin been trying for years to end the wars in Ukraine.
And if Trump was in office, Putin would have not needed to enter Ukraine. Russia is going to keep hurting Ukraine until the brake-a-way republics get the “autonomy” promised by the Ukraine constitution when agreed upon in 1996. The Russian Republics should have been allowed to leave in 2002 or at least when Viktor Yanukovych was removed by the Revolution of Dignity. Then the Orange rebellion would not have taken place. And we would have peace in the area today. Due to the victims of the Holodomor it was a very risky move to put the republics with Ukraine in the first place.

Putin would have not needed to enter Ukraine.

Are you proposing that Putin had no choice in the matter? The invasion and destruction of Ukraine was completely out of his hands and orchestrated by the US or NATO or Martians ?
In what world do you live.?

Apologies for the disruption of this thread. Some new members don’t understand that this is a moderated forum. I like to give them a chance to figure that out. But some people don’t see how their words are mere insults.

As in most cases, it’s not the individual words in a single post. You have to say something really egregious for that to result in a ban. It’s the pattern. So, that takes a couple days to develop. If you make a post or two, saying someone is wrong, then move on, that’s not great, but it’s not trolling. If you make 30 posts claiming to know the truth and putting down everything others say, without a strong and valid argument, then there’s no point in being here.

Are you proposing that Putin had no choice in the matter?

Yes, Putin was forced to invade by the Biden administration. In the same manner that America should back Taiwan. The actions being taken with the Autonomous Republic of Crimea, the Donetsk People’s Republic & Luhansk People’s Republic. Will most likely have a direct impact on future actions with other countries. For example, with China the countries with land and water rights at question are the Philippines, Vietnam, Japan, Nepal, Bhutan, India, Indonesia, Malaysia, Laos, South Korea, North Korea, Mongolia, Myanmar, Tibet, Singapore, and Brunei. And of course, the one in the news that we hear about Taiwan. If the Democrats would have let Trump into Ukraine. He would have cleaned up the greedy mess. Now the world may end up in a nuclear war so that DC swamp can have truck loads of money. It looks like the swamp is worried and are cashing out of Ukraine. They are ready to send $40B to Ukraine with no strings or accountability attached. They will cash out with huge profits. That will take a month or so. Then look for a settlement in the ballpark of what republics ask for 12 years ago and Putin ask for 9 years ago. Putin is in this political chess game for the long haul.

If the Democrats would have let Trump into Ukraine.

Presidents have had increasing power since Nixon. Not sure how the Democrats kept Trump out of Ukraine. I remember this nice chat he had with their President.

President Donald Trump repeatedly pushed for Ukrainian President Volodymr Zelensky to investigate former Vice President Joe Biden, and his son, Hunter, during a July 25 phone call, according to a transcript of the conversation released by the White...

Not sure how the Democrats kept Trump out of Ukraine.

Time flies and the memory get rusty. What I remember is the US was pumping money into what was labeled the most corrupt government in Europe. We sent money to build housing, equipment, and personal for the building of a strong prosecutor department to clean up the corruption. Viktor Shokin was the prosecutor leading the clean-up task. Shokin went after a company that Biden’s son was working for. Also, if memory is correct, John Kerry had relatives involved. You know the story told by Biden himself. He had Shokin fired in one hour. Of course, Trump wanted that investigated. And then we got all kinds of theories. I say the truth will lay with the trail of money. This Ukraine political chess game between the US and Russia had been going on almost 20 years before Trump took office. Congress set about impeachment to keep Trump out of Ukraine. When something smells this bad, you don’t take a bite to prove your smell is correct.

It was investigated. So, if you think there is more to this, you are saying all of congress is on it. You’re saying multiple investigations are wrong. Trump just saw something that was complex and had “bad optics”. It was something he could poke at and make claims about, knowing his base would get fired up and not “do their own research”.

But you didn’t want Trump investigated for that phone call with Zelensky when he tried to blackmail Zelenski to commit perjury by withholding 400 million dollars in aid, just as he threatened the Georgia Secretary of State to come up with ;

Brad Raffensperger urged by Trump in early January to ‘find 11,780 votes’ to overturn Joe Biden’s victory in the state 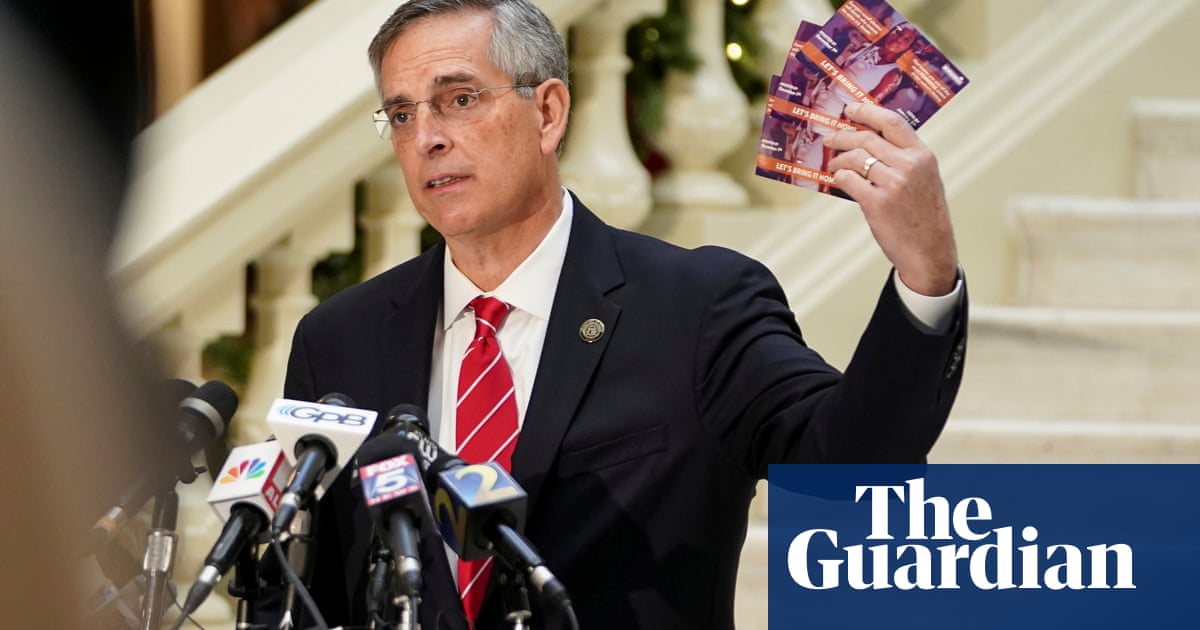 Trump call to ‘find’ votes was threat to my safety, Georgia elections...

Brad Raffensperger urged by Trump in early January to ‘find 11,780 votes’ to overturn Joe Biden’s victory in the state

It is no surprise that Trump and Putin got along. Two gang leaders plotting to divide the spoils of their criminal activities.

Trump wanted to shoot down US protesters but was told; “Mr President, you cannot do that” as a parent would talk to a 6-year-old child.

This is the man Trump. Anybody who actually looked up Trump’s biography would have been forewarned about the deviant character of this narcissistic psychopath.

What I can see from the cheap seats watching the game. Is that Zelensky punted. Zelensky number one trading partner was Russia. 22% of his country is an upset Russian population with no trust in him. The other 78% has on the fourth Saturday in November a commemoration day for the millions of Ukrainian people killed by the Russians. No doubt to keep the high amount of US tax dollars flowing into Ukraine, Zelensky must pick the winner of the US 2020 election. My gut feeling was that Biden never wanted to run for president. I think he ran to keep Zelensky from allowing an investigation into US activities in Ukraine. How long did Zelensky Ukraine investigation take? From start to finish a cup of coffee never got cold. It was a good move on Zelensky part to protect the US/Ukraine relationship. Even if Trump gets re-elected, I don’t think congress will allow a real investigation into Ukraine.

Viktor Shokin was the prosecutor leading the clean-up task. Shokin went after a company that Biden’s son was working for.

I remember looking into the real details of that…
I can only assume the rest of your post is just as misleading.

My how time flies and memory gets rusty:
2012: P.G. Pshonka begins investigating owner of Burisma Holdings
2014: Hunter joins the board of BH (as I remember reading somewhere it was for his experience in international law or something like that. NOT for his prowess in drilling for gas as some would want to question)
2015: Shokin picks up the job, but was also accused of being “an obsticle to anti-corruption efforts”
2016: Shokin removed from office for corruption

22% of his country is an upset Russian population with no trust in him.

And 78% do trust Zelensky and he was democratically elected. But you believe that 22% of people who like Putin should run Ukraine? You have a very strange sense of a democratic voting system for government elections.
But you do like brutal dictators who take government by force. Ok, point well taken.

Viktor Shokin was the prosecutor leading the clean-up task. Shokin went after a company that Biden’s son was working for.

You know why? Because Biden sent Hunter to assist in cleaning up corruption and help in organizing the new democratic system so that Ukraine could join NATO . Those were the conditions NATO had set for Ukraine’s request to join the alliance.

Shokin was part of the corruption and was opposed to Zelensky’s efforts. That is why he was “cleansed” from the clean-up task.

We have a similar situation with corrupt Trump and 22% of his acolytes accusing Joe Biden of corruption and being illegally elected with a surplus of some 4 million votes and trying a coup to take the government by force.

2014: Hunter joins the board of BH (as I remember reading somewhere it was for his experience in international law or something like that.

What was most likely not covered by the media was what was going on with the sub-soil mineral rights and who ended up owning them.

2016: Shokin removed from office for corruption

Quick internet data. Shokin was only in office for one year. USA Today– Oct 2019. Biden, allies pushed out Ukrainian prosecutor because he didn’t pursue corruption cases against politicians. If I am misleading it is because there has been no transparency. Mr. Giuliani went to Ukraine to get to the bottom of the issue and what a can of worms the media made of that.

Once in office, members of Congress enjoy access to connections and information they can use to increase their wealth, in ways that are unparalleled in the private sector. And once politicians leave office, their connections allow them to profit even further. - CBS News

Those were the conditions NATO had set for Ukraine’s request to join the alliance.

You do know that Russia, Ukraine, and the USA signed an treaty agreement that Ukraine could not join NATO,.

You do know that Russia, Ukraine, and the USA signed an treaty agreement that Ukraine could not join NATO,.

Yes and that treaty was honored until Russia invaded Crimea . It was Russia that broke the treaty!

Another article in the Russian draft would require that NATO deploy no forces or weapons in countries that joined the alliance after May 1997. That month, NATO committed not to permanently station substantial combat forces in new members and said it had “no intention, no plan, and no reason” to deploy nuclear weapons on their territory. From 1997 to 2014, NATO deployed virtually no troops or equipment in new member states.

That changed following Russia’s seizure of Crimea. NATO now deploys, on a rotating basis, relatively small multinational battlegroups in the Baltic states and Poland. It is difficult to see NATO agreeing to withdraw them absent a significant change in Russia’s military posture. However, the draft treaty would impose no requirements for redeployment of Russian forces.

Russia’s draft agreements with NATO and the United States: Intended for...

Steven Pifer examines Russia's proposed draft agreements with NATO and the United States on security in Europe, and whether they could be an opening bid in serious negotiations or are intended to be rejected and used as a pretext for military action...