Is the left irrational in its harsh criticisms of the things T rump does?

No. I don’t think so. He does things that show his gruesome incompetence for the office that he holds. He represents a clear and present danger to our Republic. And he persistently and ubiquitously trolls others unmercifully. But when someone points out something bad that he does, they are labeled by Trumpublicans as having TDS (an alleged syndrome in which liberals are so irrational and full of hate for T rump that nothing they say can be considered valid).

That is the tactic of the lying alt-righters. Make up crap about opponents of T rump, keep bringing that particular crap up, over and over, until people believe the lies. Meanwhile they always address the truth based criticisms of him by the left, as emotional fantasies, unworthy of considering.

I am emotional about T rump. Negative emotions. But I am also quite rational in my criticisms of him. I make fun of him because jokers like him in positions of public power, deserve, at least as much crap as they dish out to others.

Here is a picture of him showing love to a pathological narcissist. Obviously, this pic has been altered, but it represents a real, and arguably diagnosable condition of Narcissistic Personality Disorder. And it looks quite romantic. 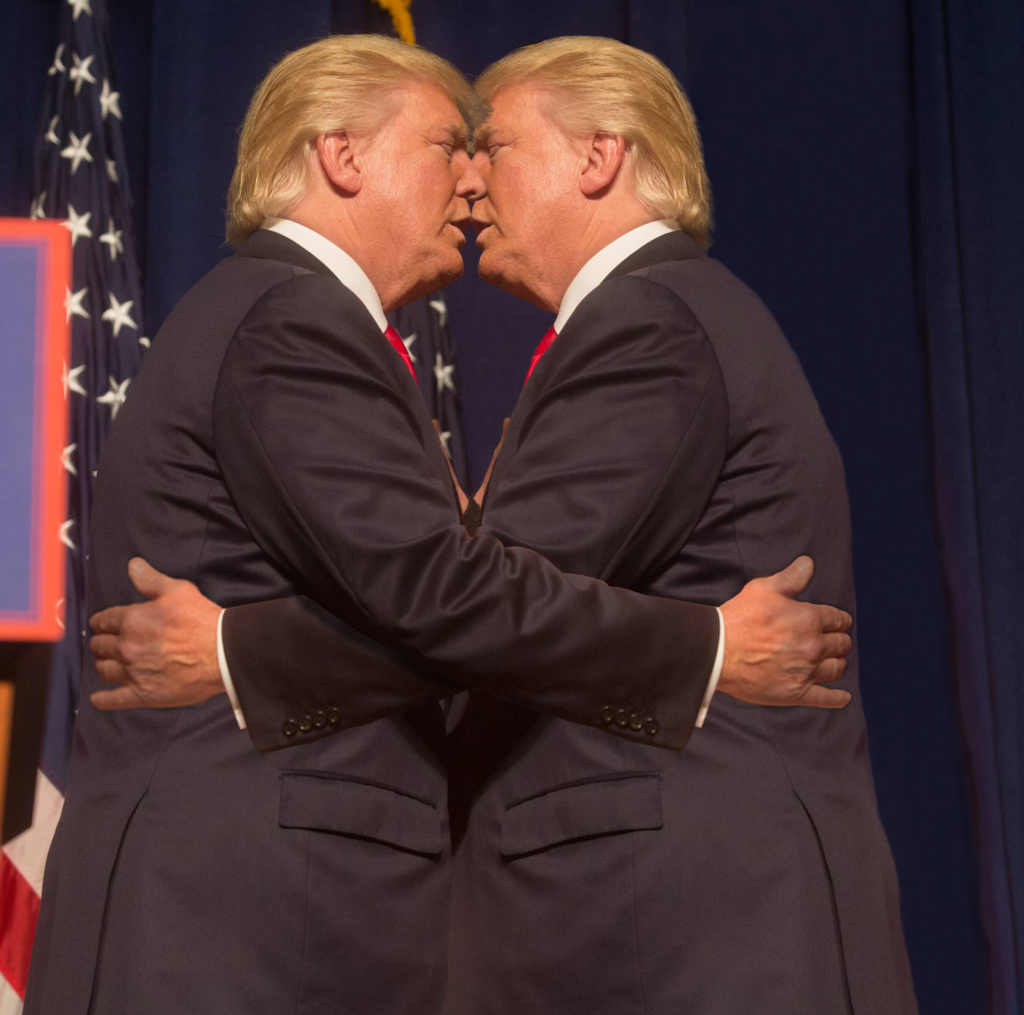 That picture nails the punk’s essence.

No, the left is NOT irrational in criticizing and rejecting the legitimacy of a serial liar, con-artist, wanna be king, believer in Comic Book reality and traitor to America’s government and society.

Well okay I know the Ugly American, close cousin to English Imperialist of yore, has always been a powerful cord running through our country,

Me First explains it.

But to allow it to become our main chord, especial in this world of increased crowding and interdependence. Learning to better understand each other and perhaps even to cooperate better would have been a better direction to follow. Lordie knows the one we are headed on only has hell on Earth at the other end. But then we would have had to bury the notion that Too Much Is Never Enough. Ka sera sera.

Sometimes, yes. Not just Trump, but the right in general. But mostly no. The left does tend to be more centered, more restrained, more honest, more empathetic, more likely to respect and follow rules, more likely to have a sense of fair play, etc. Everything we generally think of as aspects of a “good person” is more likely to be found on the left, in general, than on the right. But that doesn’t mean they’re perfect. I have seen instances where they went off on a policy of the right and criticized it unfairly. I’ve mentioned this before, the Republican law to allow employees to take time and a half off in lieu of overtime pay was one such time the left failed. It’s a good law. Employee and employer must agree to do it and either one can end it at any time, at which time the employee will get the banked time as pay. If they accrued too much time the law requires an automatic payout. If the time is banked for too long the law requires an automatic payout. If their employment ends the law requires an automatic payout. And it’s completely voluntary for both parties. Democrats acted like it was a new way to abuse employees and it simply wasn’t.

When it comes to Trump, however, they actually have to pick and choose what they criticize him for. There’s simply too much just criminal activity alone to criticize him for all of it. You’d need a day and a half to deliver all the criticisms and a month of follow-up addendums for the things you forgot to add the first time around. He’s literally the most corrupt president we’ve ever had and he’s being protected by the right, even up to the point of Moscow Mitch outright stating that he was going to ignore his Constitutional duties and oaths to protect a criminal in office, country be damned. Our democracy is in danger from so many angles right now that I’m literally afraid that I wouldn’t recognize it 50 years from now. Republicans are selling out the people to corporate interests and have been for decades. And Trump is corporate interests. They finally got their dream of having a businessman in the Oval Office. I sure as hell hope they’re over that one.

As usual you make a great deal of sense. Thank you for your moderating perspective.

It’s my Hungarian Passion, has me steaming more than ought,

but really so much hatred is being deliberately and systematically fabricated and so much is being actively destroyed that didn’t need to be. Then what’s going on with the Fed Court judges guarantees a flood of yet more self-destructive dogma driven monstrosities in the years to come.

True, Wid, I don’t mind criticism of the left, as long it is not presented as falsely equivalent to the crimes, hypocrisy, and deceit of the right.

As far as the T rump, I hear he is at over 2700 (and counting) conflicts of interest. (And over 4 times that in lies.) Not to mention his criminal behaviors and certain policies of cruelty. Not to mention his polarizing and riling the American electorate into a partisan frenzy of aggressive animosities. Not to mention that his catch phrase of “America 1st” actually means “America progressively more distant from its previous allies in the world”. Who could keep up with the daily disaster that is T rump?

I actually tried in a thread, some months ago to do a daily report of just the worst highlights of T rump’s crap. I could not hang with it. It was just too much. Not to mention demoralizing to be constantly wading around in the T rump sewer of corruption. But we are all subject to it anyway when the defilement seeps over into our awareness from one source or another. He has drained no swamp. He has turned the swamp into a sewer and that sewer is growing and growing.

Of course it is but the left is mostly insane anyway so who cares.

Oneguy, are you talking about the same “left” that produced an international agreement thru onerously difficult negotiations to get an agreement that would have kept Iran from producing nuclear weapons for decades? An agreement that (what passes for the right these days) T rump re-nigged on and instituted Maximum Pressure instead. The policy that the White House believed would either bring Iran to its knees or prompt regime change? That is not insane? That is the work of an effective CiC? And the Trumpublican chicken hawk, Lindsey Graham, shaking with excitement declaring we must immediately prepare for bombing the piss out of Iran’s infrastructure to react to Iran when they lash back for the assassination of their Military and Political figure, Soleimani?

Instead of getting soldiers (now called “war fighters” cause that sounds cooler to chickenhawks) out of the Mideast we are pumping more and more in (including, what? 7000 in frikkin Saudi Arabia). That is sane?