In tracking COVID-19, keep your eye on this number

Allow me to give some good news in the following example of using the doubling time number.

On March 24th the number of US deaths from C-19 was 780. The doubling time then was twice a week. This you can use to do the math to tell you what the death number would be in two weeks at that doubling time rate. The answer is well over 12,000.

And it is quite possible that the doubling time is continuing to take even longer as time goes by. IOW something is working to slow the virus down.

I suppose that when the doubling time becomes longer than the course of any given person’s infection time with C-19, we will have gotten it under control. I’m not sure about that, but it seems right.

Idk, off-hand what the typical time of infection lasts for C-19 infected persons.

Hence, let’s look for how long it takes to get to 52,000 total deaths. Hopefully it will be significantly longer than 1 week.

There needs to be deaths. It’s called elimination; otherwise, the planet would be constipating.

Sree, there are always going to be deaths. We don’t need to contribute to them.

It has been a week since I calculated the current doubling rate for deaths from C-19 in the USA. Recall that the deaths had doubled in one week, from 12,883 on April 7th to 25,992 on April 14th.

The doubling number rate that we are looking for now, is how long it takes to get to 52,000. It is not there yet, so we see that the doubling rate is still getting longer.

Right now, it is about 45,000, so it seems pretty likely that 52,000 will be reached this weekend. IOW the doubling rate for now is about every 11 days, but progressively taking longer as time goes on.

So let’s use this info to predict when the deaths will exceed 100,000.

So let’s use this info to predict when the deaths will exceed 100,000.

The No. 1 killer is still heart disease followed by cancer deaths. Every 38 seconds someone dies of heart disease - more than 350,000 deaths last year. This accounted for 1 in 7 deaths in the USA. This has been going on since forever and we never had a locked down. People die all the time. Get used to it.
citizenschallengev3 April 22, 2020, 12:15am #9

This has been going on since forever and we never had a locked down.

And still can't for the life of ya figure out why social distancing is such a big deal.

Jesus 'n christ, last year we could cram ourselves shoulder to shoulder in arena’s are the nation - wtf -" I wanna breath the same air all my neighbors are breathing, I’m a free Amerikan."

You know the numbers to keep an eye on, those trumpsters that insist on large crowded gatherings while a new increasingly deadly virus is spreading and mutating through out the nation, lets see how time judges their choices.

about those numbers to keep an eye on https://coronavirus.jhu.edu/map.html

And still can’t for the life of ya figure out why social distancing is such a big deal.

It's a big deal because everybody got spooked. When we come to our senses and face the fear of no means of livelihood, we would throw caution to the winds like the illegals risking life and limb to find work in America.
timb April 22, 2020, 1:17am #12

Sree, It doesn’t matter what the typical death rates of various other ways to go are.

So far, this year 45,000 have died of something completely new. And that number will probably be something over 100,000 this time next month.

CC, that is the Stat site that I usually refer to.

Imagine that there is a Mass Murderer, (we can call him S. Bundy) He is unlike any ever known. He is able to go undetected, and this guy began killing people across the entire nation. He killed and killed and killed. Til he got to 45,000 victims. But he’s not done. Within a month he is going to have killed over 100,000 of us. (And he would have already killed many many more of us, except a month or so ago, we all agreed to stop everything and hide.)

Now some, can’t hang with the hiding plan, so we need a different plan. We prepare to do what we need to do in order to track down his movements. We gather all of the information that we need to face him where he is. THEN we dance.

But if we try to dance before we are ready, we will fail. 3 weeks later, S. Bundy is not only still on the loose, but his rate of killing is then going to be going higher. And we will still need to learn to dance.

To even START any questionable relaxation of social distancing, NOW, random TESTING for active C-19 infection in a given population should be LOW. If you are picking up 20% as positive tests in a random pop., then that is WAY TOO HIGH to start opening up.

SO in the meantime, leave the shutdown in place, and start doing testing/CONTACT TRACING and ramp that up!, cause there will be a lot of it to do.

One other thing. Everyone with a cellphone should opt in to being tracked for the purpose of tracking the C-19.

(AND why the hell is it not yet mandatory for all to wear a face covering in public?)

The article is about misinformation, but it also has a great chart showing why the rate of transmission is the key and how that relates to the doubling. 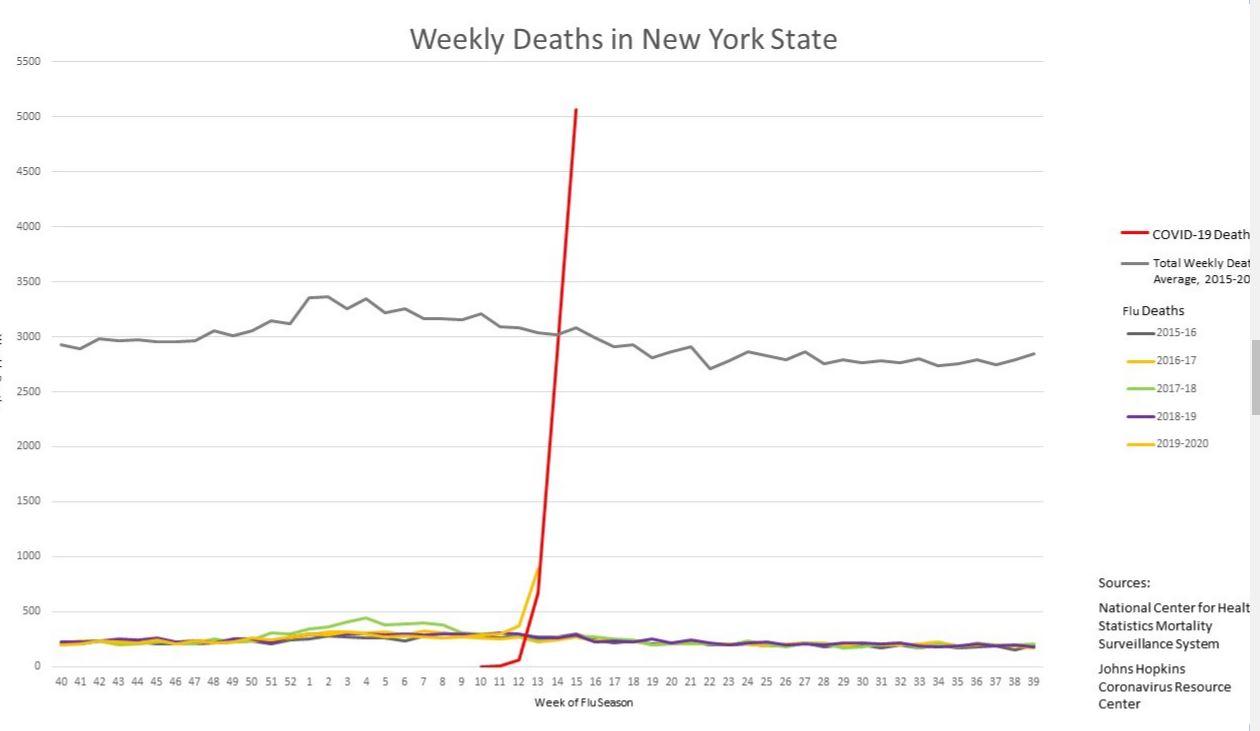 The No. 1 killer is still heart disease followed by cancer deaths.

I'll be sure to link you to this when covid becomes the #1 killer. When in your lifetime or anyone's have you seen a disease that was non-existent last year, become the #1 this year? Pretty sure never. Also we don't have a lock down to stop heart disease and cancer because lockdowns don't affect those death rates. You actually know that though, don't you? Troll.
citizenschallengev3 April 22, 2020, 9:33am #17

TimB: CC, that is the Stat site that I usually refer to.

And that has been shared in these pages a few times by various people - I brought it up again to since our troll missed it the first half dozen times.

Oh yeah, I forgot, he, they don’t give fart about facts or learning about our physical reality. Hell they probably thing “physical reality” is some TV show.

Lausten seems to me this should be at the top of the page so taking another liberty.

I hope that my obsessiveness about the projected death rate is not becoming tedious.

But I want to highlight that there is a Model of projected deaths that has been getting (it seems to me) a lot of airtime. And that is the one that just yesterday, I think, raised their projection of # of C-19 deaths in the US to 66,000 (from their previous 60,000 prediction) by August.

Now you can see in my earlier posts in this thread, that my doubling number projection is over 100,000 while still in May.

That is a drastic difference!! One of our respective Models may be defective.

Sree, It doesn’t matter what the typical death rates of various other ways to go are.

So far, this year 45,000 have died of something completely new. And that number will probably be something over 100,000 this time next month.

No, it’s not. I understand why people like you are alarmed by the virus but insensitive to economic consequences of irrational fear. It’s not that it will kill you or your family, or that you will lose your means of livelihood. You have no skin in the game even if the entire country is placed in a lock down till no one dies from the virus. No pain.
citizenschallengev3 April 22, 2020, 3:35pm #20

but insensitive to economic consequences of irrational fear.