Herman Cain, the Godfather’s Pizza boss who ran unsuccessfully for president in 2011, has died at age 74 of complications from the coronavirus in his hometown of Atlanta, where he had been hospitalized for four weeks after he appeared as a warm-up act for President Donald Trump at a June rally in Tulsa, Oklahoma.

The dotard has killed more than 150,000 U.S. citizens (probably more like 200,000 or more since the dotard destroyed the data). The dotard has also killed almost as many Latinos, if not more in cages housed in detention centers. They’ve died from heat, neglect, flu (dotard refused to allow them to be vaccinated against it), and also COVID-19. I also surmised those who died in prison from COVID-19 were not counted in the deaths at least, if not in the case count too, given that there is a high rate of COVID in prisons too. So it’s no surprise that the dotard has started causing famous/supporters to die too. I also surmise more of his supporters than non-supporters will die before November 3, but if he’s not dragged out of office, with He Who Is Not Worth His Name and Moscow Mitch too, before November 3 (impeachment, before then, is preferable, but I really don’t care how people do it, as long as there is no loss of life or people risking getting COVID. Meaning they cannot do a John Wilkes Booth or a Lee Harvey Oswald). We need enough healthy people to vote the dotard out of office. I don’t want to do in person voting though. I rather do mail-in voting in order to not get COVID, but short of that, I will wear a mask if I must do in person voting.

He proudly did not wear a mask. He no doubt caught the COVID-19 at that t rump rally. And he died. Wow.

Herman is 74. How long does one want to live? Life expectancy in the US is 78 years. He had a good life; especially, for a black man; my kind of black man.

"He was born Dec. 13, 1945, in Memphis, Tennessee, and grew up poor in Atlanta, Georgia, where his father worked three jobs — as a janitor, barber, and chauffeur — while his mother toiled as a domestic worker. A stellar student who worked hard, Cain graduated from Morehouse College with a mathematics degree in 1967. Cain went on to earn a master's degree in computer science from Purdue University in 1971, and helped develop fire control ballistics for ships and fighter planes for the U.S. Navy. Next, he joined The Coca-Cola Company as a systems analyst, and after considerable success, moved to Pillsbury. After serving as regional vice president of Pillsbury's Burger King, Cain then took on the biggest challenge of his career as president and CEO of Godfather's Pizza, a national chain teetering on the edge of bankruptcy. In 14 months, he returned Godfather's to profitability and led his management team to a buyout of the company. Later, Cain said he could explain his success at Godfather's Pizza in one word, "marketing." Cain, who long held an interest in public policy, became chairman of the Federal Reserve Bank of Kansas City Omaha Branch in 1995, serving in the position for 20 months." (Source: Newsmax)

I am glad you brought him up for our attention. He is a better example of a black American hero for inspiring us than Martin Luther King Jr.. Blacks do themselves in by looking up to wrong role models like George Floyd or John Lewis.

Here are a couple of quotable quotes from Mr Cain who ran for President supported by his white “Tea Party” base. May he live in our hearts forever.

"The only tactic liberals have is to try to intimidate people into thinking that the Tea Party is racist. The Tea Party is not a racist movement, period! If it were, why would the straw polls keep showing that the black guy is winning? That's a rhetorical question. "Let me state it: The black guy keeps winning."

“We have a war on our moral fiber. We will not allow the godless few to destroy our moral foundation.”

I imagine very few Trump fans will lose any sleep over Cain.

We Americans only lose sleep over money.

Cain was a funny likable guy. And he seemed like he had another solid 10 years left in him, before the COVID got him.

Here he is at that t rump repugLIAR rally, in what looks like what used to be called the “colored section”. 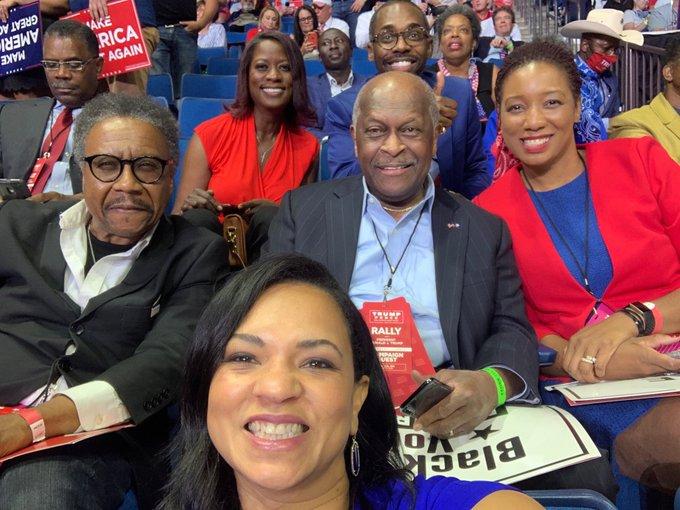 Here he is in devotional attendance of the t rump, indoor, non-social-distanced rally at, what was then, the height of COVID-19 infection spread in Oklahoma.

He wears no mask in his loyalty to the whims of the t rump. It was probably this event in which Herman was infected with COVID-19.

The t rump could have shot Herman Cain dead on 42nd St, and gotten away with it, but this way Cain’s life is given up in voluntary supplication to the t rump. The latter way of sacrificing a human for the sake of the t rump ego, is probably more satisfying to him.

But, Cain did not have to go. If he and his crew at the Tulsa rally had just worn masks, he might still be here. He could be planning a trip to Uz Becky Becky Stan Stan.

But, Cain did not have to go.

Man, you really like hanging around this side of Hell.

You really like posting pictures of whiskey in a glass. That seems like a poor existence to me, but hey, to each his own.

Herman lied to himself in his adoration of the t rump, and he died because of it.

Even so, I consider the t rump also culpable in Herman’s death, in that the t rump promoted Herman’s self lie and promoted the behavior of not socially distancing or wearing a mask at an indoor rally, in an area that had a rising outbreak of COVID-19.

You, otoh, prefer to drink whiskey and ignore the murder by the t rump of a loyal supporter.

You, otoh, prefer to drink whiskey and ignore the murder by the t rump of a loyal supporter.

You don’t have the faith, and that’s why you can’t see the truth. I have been praying for you.

Sometimes you really do crack me up.

The sentiment is mutual. The line that cracked you up was taken from a movie I saw last night. It was spoken by a white guy, a father of two boys, who was told by an angel to go kill demons. "But they are people," his older son said. "Killing people is wrong," he explained, "but killing demons is ok." It's the same justification you use to hate Trump. Hate has no home here is your schtick. Hating people is bad but hating Trump is ok.

We should have a drink to celebrate this revelation. Cheers!

Good to know that your random comments can have some context, even if only to you.

BTW, I am not sure how you are connecting me to being some sort of “Hate” policeman. To me “Hate” is one of the human emotions repertoire. It can be very bad if not controlled, but can be quite good as motivation and sublimation in to something positive.

I would suggest that there is nothing improper about hating a character like the t rump, who has failed, and continues to fail our country daily, for months now.

It would be wrong of me to hate him because he is orange. So I don’t hold that against him. And I think that even orange lives matter.

To me “Hate” is one of the human emotions repertoire. It can be very bad if not controlled, but can be quite good as motivation and sublimation in to something positive.

Hate has no controller because "hate" itself is the motivator of human behavior. To you, Trump is not fit to be President. I get that. So, fire him. Vote for someone else in November. Do you have faith in the system? If you do, then honor it and accept the next President even if the person is not your choice. If you believe the system is flawed or rigged, then that's it. Hate has no home here.
lausten August 6, 2020, 5:53pm #16

If you believe the system is flawed or rigged, then that’s it. Hate has no home here. -- Sree

I can never tell if this is a misunderstanding of the Constitution, complete failure to be aware of it, or a deliberate obfuscation. The system is designed so the system can be fixed. Less intentionally, it is also designed to concentrate power, but let's say it can be fixed. The electoral process has obvious problems, the need for a massive majority to pass an amendment, too many precedents that should be codified and enforceable, the expectation that reasonable and honorable people will hold the highest seats in the land thus keeping corruption in check, the idea that the President makes the law and therefore is above the law, long standing open ended declarations of war, geez, it's become pretty bad since Nixon, and it's not getting better.
timb August 6, 2020, 8:05pm #17

Do you have faith in the system?

I was really surprised this irony did not get more coverage. A doctor who didn’t take Covid seriously dying of Covid. I mean, come on! You cannot get more perfect irony than that! Hopefully he gets nominated for a Darwin Award at least.

Herman was not a doctor, afaik. You may be confusing him with Ben Carson, the brain surgeon who the t rump assigned to be the Director of Housing and Urban Development. The t rump probably put the brain surgeon in that job because Ben is black. But Ben Carson is still healthy, afaik.