Still no mask for the DOTUS?

Now T rump’s personal feeder has tested positive for C-19. The guy that brings T rump his food didn’t wear a mask around T rump. Because no one around T rump wears a mask, because T rump himself is too sick with his personality disorder to bear covering his own beautiful (to himself) face. So they rationalize in the White House, as we saw Pence do recently, saying that everyone near the T rump is tested regularly, so wearing a mask is considered to be unnecessary.

T rump has tested negative since his feeder tested positive, but it is possible that the virus is in his body but hasn’t gotten settled in yet.

So will he wear a mask now to protect others around him? Of course not. There is something about wearing the mask that his ego cannot handle.

So I suspect that others around T rump will be wearing masks more, but not T rump. T rump is above such things (like he is above the law).

T rump and the VP and others in the WH will now get C-19 tests daily. It was weekly. Now daily.

T rump is right when he says we have the best testing for C-19, at least when it comes to him and his cronies.

But not so for all of the nations’ nursing homes, prisons, meat packing plants, frontline healthcare people, and people with symptoms not severe enough, yet, to be hospitalized.

Also, if you are potentially exposed by someone who gets tested positive, you are supposed to self isolate for 14 days. Do you think T rump will do that? I don’t.

The VP’s spokeswoman now has COVID-19. But, even now, hardly any of the WH staff are wearing a mask.

So they are all getting tested daily, now.

If/when T rump gets a positive test result, will he THEN wear a mask? I think he will resist. (His ego won’t allow it. This despite the sheer ugliness of his face.)

Too bad. It would be nice to have some of that ugly covered up.

I think the dotard may have it, but isn’t showing symptoms yet. He Who Is Not Worth His Name also refuses to wear a mask and time will tell if he ends up testing positive too. However, wearing a mask isn’t 100% that you won’t get the virus. In fact, wearing a mask helps cut the chances you’ll spread the illness to others, especially if you’re asymptomatic.

A bunch of Secret Service have tested positive, but it is not reported as to whether any of those were assigned to T rump. His Secret Service in the White House have been reported to mostly NOT wear masks, but they are supposed to now.

T rump keeps exhorting Americans to go forth and be warriors in this Coronavirus war. For once, I think he should lead by example and he should take some turns at working on a line in a meat packing plant, in a prison, and in nursing homes, and emptying trash and mopping floors in ICU wards.

It could be like the best ever episodes of “Undercover Boss”. T rump would be modelling his demand, that the rest of the public become warriors. He would be a hero. The ratings would be thru the roof. And if he survived the disease that he would inevitably catch, he might even have a shot at the 2020 election. It could be the culmination of “reality” TV!

So c’mon Goofy Face Donald! Do it! Become a warrior, yourself. Forget those bone spurs. Go to the front lines!

What difference does it make to you or me whether Trump wears a mask or not? Since he gets tested at least once a day, and we are not in his presence I don’t see why you are concerned, unless you just don’t have anything else to complain about. If that’s the biggest thing you have to bitch about you should count your blessings.

Besides that you must understand that Trump is not about to cover up his beautiful face while he’s on camera.

You are right logic. Trump is a stupid jack ass, who the f cares what he does.

But a leader of a great nation, that would be a totally different story.

A leader that lead by example and that cared about the unity of his nation.

Now that would be an entirely different story.

Tim was simply overlooking that trump is a vandal, an angry crazy man that wants to divide and harm this nation as much as he possibly can. We used to be protected from such madmen in our society - but then Koch and his TeaPartiers took over the Republican Party and the rest is history.

Tim was thinking it terms of our expectation for a leader of a nation.

Notice that you’ll not hear a single Republican bull horning the question they used to love tossing around:

ARE YOU BETTER OFF NOW THAN YOU WERE 4 YEARS AGO?

Why, because just as soon burn it all down. Shrink government till it’s so small they can drown it in a bathtub. Just like Mine Kampf and Hilter letting the stupid sleepy lazy people know exactly what he had in mind. Tea Partiers and Evangelicals made no secret of their intensions.

Now we see what that sort of imbecilic thinking accomplishes.

I think that if everyone wore a mask whenever around others, there would be less transmission of C-19. If the “leader” (Goofy face) wore a mask, everyone else would be more likely to wear a mask, including the right-wing dildoes that live in my State.

So it is in my personal interest, and as a humanist, I would prefer that fewer people suffer and die from C-19.

I know T rump is not going to wear a mask, because he thinks it might make him look goofy. He doesn’t seem to process that by being a consistently goofy leader, his face has become a symbol of goofiness.

I mean, just look at him before he brushes his teeth! 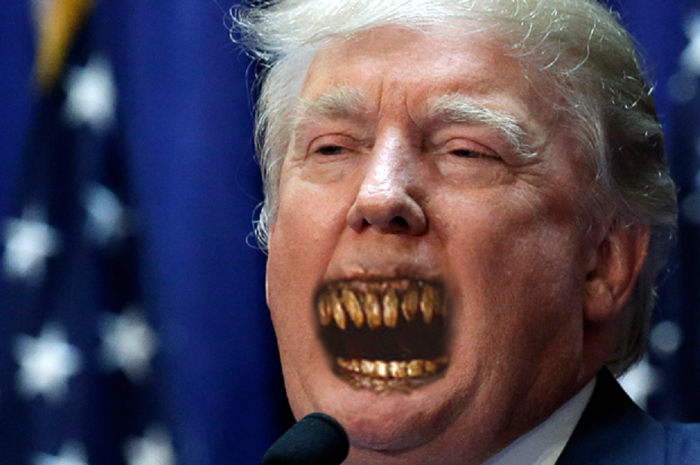 Goofy face Donald… an Icon (of goofiness). And ugly too.