I know on forums, you get to express yourself a little more, hmm, plainly, so this question is more about how to handle public or family situations. I’ve been working with a group that brings together people across the political spectrum to hear other’s point of view. The idea is not to change minds, but to listen. It’s called Better Angels. I’m not selling it, just telling that because what I keep hearing is it is hard to get conservatives to come to the workshops because they feel they are getting beat up for expressing their opinions. Yeah, I know, of course they are, right? Because their opinions are all messed up.

I’m not asking for tolerance of the intolerable here. I’m just stating that this is out there, and it’s not going away. Trump’s rating has been 42% his entire Presidency. It’s a horrible rating for someone just elected, but it’s weird that he’s maintained it throughout impeachment. The only conclusion I have is, they aren’t going away. They’ll find another “Trump” after this one.

So, what I want to express to them is, “yes, you are getting creamed by every major news outlet except the ones that cater to conservatives. Look at history, there have always been people in that position. There have always been things that you couldn’t discuss in public and keep your job, your friends and even your family.” At that point, it’s hard not to start thinking of examples, and as soon as you do, the discussion is off the rails. If you say abortion used to be something you did in a back alley, they’ll see that as an excuse for murder. If you say we used to treat homeless people like criminals, they’ll start talking about personal responsibility or something. There has to be a way forward with this conversation.

There has to be a way forward with this conversation.

Both partners in the conversation have to want it to work and there has to be something that both agree on. Without those two ingredients, it is unlikely the conversation last or even take place. If one side refuses to be civil, it will never work. Same as if there is no common ground.

Look at our friend Sherlock- without his buy-in that a civil discussion was the goal, it was never ever going to happen. And in discussions where the topic is emotional or moral, even if there’s an agreement that there will be a civil discussion, once things get going emotions are inevitable, which usually leads to things going down hill fairly quickly.

I wish you well and hope the Better Angels gets a great bunch of people attending who can find some understanding, if not agreement, on both sides.

The workshop rules handle the civility part. They have been doing this for a few years and have had very little trouble with anyone being disruptive. The core workshops don’t debate, but there is some time for questions. There is also a debate format, but it is parliamentary, where you always address the chair. But not like England where there is yelling, if you have the floor, that’s it.

That sounds amazing. Too bad I live out in a small rural town where nothing of that sort exists.

Since you have rules in place to keep things under control, you probably have a good chance of having productive discussions. I’d love to be a fly on the wall in one of those sessions.

At that point, it’s hard not to start thinking of examples, and as soon as you do, the discussion is off the rails. If you say abortion used to be something you did in a back alley, they’ll see that as an excuse for murder. If you say we used to treat homeless people like criminals, they’ll start talking about personal responsibility or something. There has to be a way forward with this conversation.

So you have to give an example that they currently can't openly object to in public, like the rights for black people to vote and desegregation. "Back in the day" you couldn't openly support equal rights for minorities. But today you can't openly not support that (although those boundaries are eroding).
lausten December 16, 2019, 4:50pm #6

I’d love to be a fly on the wall in one of those sessions.

Well, actually, you can go as an observer. If you can't choose a side, or don't want to, you can sit and listen to everyone else.

I did 3 workshops last year, and they were all 100 mile drives. So, I’m trying to get something going in the northern part of MN. At least it will only be 40 miles.

That's a pretty good one. There's that "reverse discrimination" thing, but they have to take some responsibility for being triggered.

I was also thinking along the lines of slavery. There are still places in the world that happens, and will literally use our military to stop it. It just seems like such an extreme example though.

Tolerance is one of the many crosses liberals must bear, it seems.

You should look up “not tolerating the intoletable”. Its a critical factor for civil society.

The other day, here in the uptight U.S.A., I was in line waiting to buy my groceries and I turned around to see a woman with her breast out and nursing her baby. Realizing that she was nursing, I tried not to look shocked as I turned back around to give them some privacy. At my age, that is a new thing, not seen in the past, but I accept it as the new norm, even though that was the first time I ever seen it in public. That use to be “intolerable” and something mother and child went to another room, shutting the door, so no one could see her breasts. To me, that’s being tolerating of something I was brought up to think of as intolerable, only because that’s allegedly becoming the new norm and we are suppose to tolerate it now. I turned around again for some reason concerning my goods and she was still nursing. I faced forward the rest of the time, except to pay, avoiding looking behind me, to give them as much privacy as they would get in public, by not staring at them. I think Lausten is talking about things like that.

thatoneguy, Tolerance is one of the many crosses liberals must bear, it seems.

Tolerance is one of the many crosses liberals must bear, it seems.

Is it really that hard to not fly into a rage when I see or think about people living their lives in a way I would not enjoy myself? A "live and let live" attitude is actually a whole lot more chill than a "You're going to burn in Hell!" way of looking at things. There is no cross to bear. I actually got down off the cross when I accepted that there were people in the world who were different than me and that was okay.
3point14rat December 17, 2019, 11:58am #13

The first paragraph of this site states that there is a limit to tolerance.

Shortly after that, the page has a quote by Karl Popper. It is the ultimate quote on tolerance that explains the limit of tolerance and why it exists. Here it is in all its glory:

Unlimited tolerance must lead to the disappearance of tolerance. If we extend unlimited tolerance even to those who are intolerant, if we are not prepared to defend a tolerant society against the onslaught of the intolerant, then the tolerant will be destroyed, and tolerance with them. — In this formulation, I do not imply, for instance, that we should always suppress the utterance of intolerant philosophies; as long as we can counter them by rational argument and keep them in check by public opinion, suppression would certainly be unwise. But we should claim the right to suppress them if necessary even by force; for it may easily turn out that they are not prepared to meet us on the level of rational argument, but begin by denouncing all argument; they may forbid their followers to listen to rational argument, because it is deceptive, and teach them to answer arguments by the use of their fists or pistols. We should therefore claim, in the name of tolerance, the right not to tolerate the intolerant.

Can't argue with that!

They say diversity is good, but, personally, I’d like a bit more agreement on the topics of tolerance and rationality. 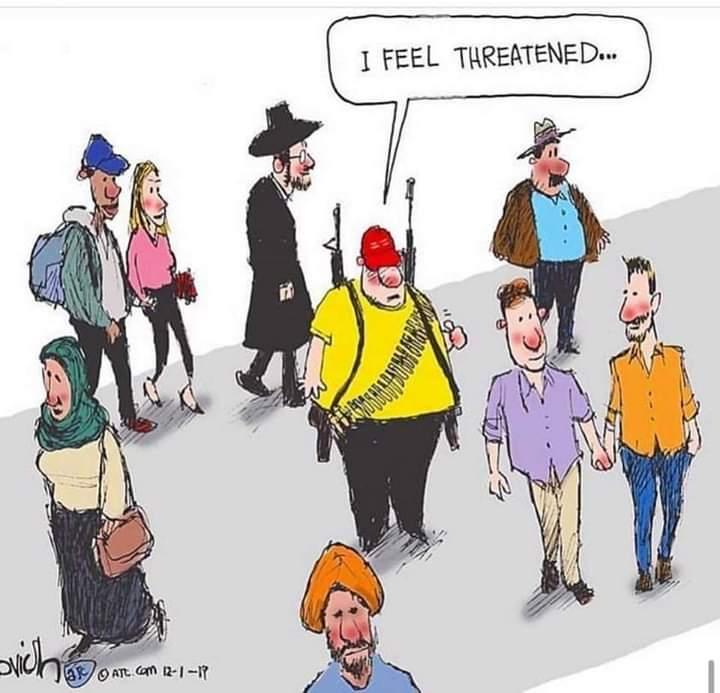 By what? Seems like the dude in that picture has a persecution complex.

Just saw that cartoon last night. I thought it was a pretty good illustration. Your breast feeding example was a good one. A few people would still be triggered by that, but any reasonable person would get it. Baby changing stations in men’s rooms is kind of similar. Not too long ago a guy changing a diaper would be considered kind of odd.

Lausten, I commend your efforts.

Oneguy, I think you are right about tolerance being another Dem cross to bear. But it really must be rationally limited tolerance or we shouldn’t do it. I am tempted at times to abandon tolerance altogether, so as to be on a more level playing field with the opposition. But then I recall that a democracy requires tolerance to function effectively.

Mriana, My take on a mom nursing her baby in public: Go for it. I consider it a beautiful and natural thing. I might comment to the mother “Oh what a precious baby.” Babies are cute. Boobies with nipples that provide milk to babies are good. What, do you think the sight of a baby feeding from a booby, in public, is going to do? corrupt someone?

@TimB No I don’t think it will corrupt someone. As I said, it was stuff I grew up with. I really don’t think much of it, but also think they should be given some privacy and not talk to when nursing. It’s sort of a moment between mother and child- like interrupting someone’s conversation that’s none of your business. Very bad time for a man, IMO, to comment on how cute her baby is. Then again, I never breastfed because it made me uncomfortable. That and I really couldn’t.

I doubt that saying “what a precious baby” would damage the parent child bond. I doubt that my comment would disturb the baby’s lunch. And if the mom had wanted to focus exclusively on the bonding experience, she probably wouldn’t be out running public errands simultaneously.

If you are concerned that I would be in danger of falling victim to the “Me Too” movement, I don’t think that I would be learing, drooling or otherwise projecting some sort of sexual offensiveness. Rather, I think the comment would indicate an acceptance of the mom nursing in public.

No, maybe not damage the parent-child bond, but I think it would be creepy at that moment. However, as I said, I didn’t breastfeed my babies because of one of the reasons being uncomfortable with it. That said, a respect a woman enough to give her and her baby privacy.