Trump so incompetent. - Can't even succeed at being a loser.

On the bright, we can still laugh at treasonous disaster and tragedy. Case in point,

Michael D’Antonio, a biographer of President Donald Trump, has described the president as a “loser” who can’t accept his defeat by former Vice President Joe Biden in the recent election.

D’Antonio, a Pulitzer Prize-winner who wrote the 2016 book The Truth About Trump, spoke to CNN on Friday about what he called the president’s “buffoonery.” He is a contributor to the network.

“He is profoundly an incompetent person—a loser, if you might say,” D’Antonio said, using an insult Trump is famously fond of lobbing at his critics and political opponents.

"He's so incompetent that he cannot even succeed at being a loser," ...

WASHINGTON (Breaking News)—Claiming that his tantrum about losing the election had ruined Thanksgiving, Melania Trump exiled her husband to the children’s table.

Donald J. Trump’s expulsion occurred shortly after his wife asked those at the grownups’ table to name things for which they were thankful.

Jared Kushner named “doing such a kick-ass job on the pandemic,” Ivanka Trump cited “that I didn’t talk to Bob Woodward,” and Rudy Giuliani chose “my beautiful, naturally dark hair.”

When it was the President’s turn, he launched into a ten-minute tirade about an election-stealing conspiracy involving …

By the time he began calling for the imprisonment of Lesley Stahl, Melania had heard enough.

“You just wrecked Thanksgiving, which is my favorite holiday,” she said. “It’s not like Christmas, which totally blows.”

She then banished her sulking husband to the children’s table, causing Barron Trump to remark, “Why am I being punished?”

Barron later emerged victorious in a wishbone game with his father, who demanded that the result of that contest be overturned. 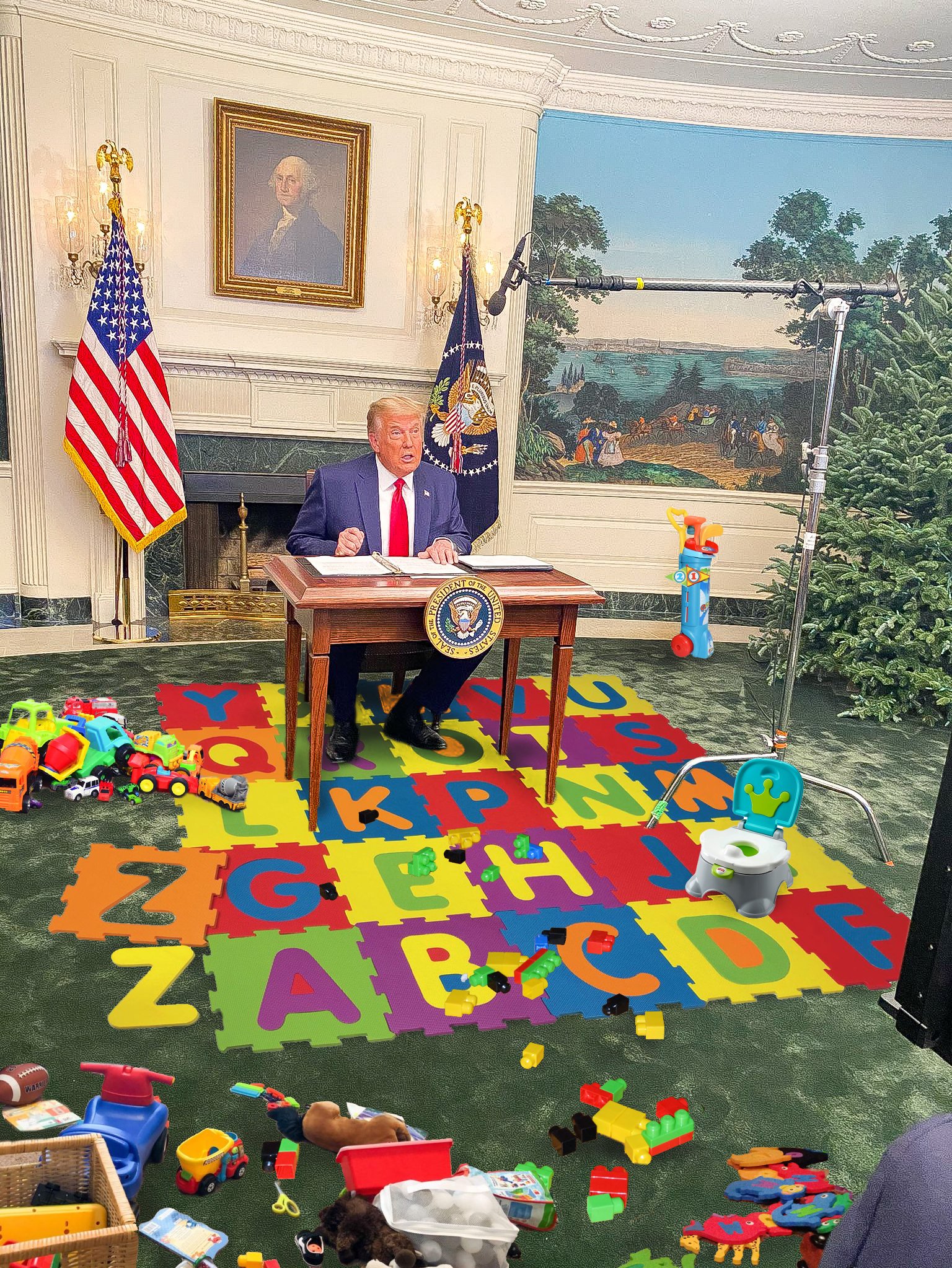 In the I never knew department, the loser can’t even hold on to his . . .

Let me try that again.

Why am I surprised, he’s never outgrown childhood, why expect that we was ever potty trained.

After all, it is a matter of learning some self-control, something the monster’s obviously never achieved.

I wonder if he has a Groom of the Stool? Best kept secret in the White House I suppose.

That’s why we voted him out. He’s a child, not a grown man who cannot do the job.

And the transition is underway. yay

Must kill him seeing the attention turning on Biden’s every move.

Trump is the lesser of two evils

choose him not because he’s competent,

because he’s the lesser of two evils

"Trump is the lesser of two evils"

I like to think I have a good imagination, but I simply cannot imagine an evil greater than Trump. Seriously.

It’s like how a bullet and a deadly virus can kill a person. The bullet is quick and devastating to a local area but the virus affects and can kill every cell.

@gyx2k, can you explain why you feel that way?

My pleasure. I wrote it to see if I could find an analogy for how I see Trump. His innate horribleness is insidious rather than explosive, which is the worst of the two options.

No. Clicking a button is too easy. Then everything is liked or disliked. I'd rather have a single note of appreciation than a thousand "Likes" garnered through clicks of an icon.

Which is not to say I don’t love reading practically all the posts from most of the people here. You are geniuses and I would love to be able to express appreciation for everything I read, but I know a constant stream of accolades from me would be a nuisance, so I rarely do it.

Maybe if each person were issued one or two “Likes” per day, they would be useful.