Tin Soldiers and Nixon coming - or what rhymes with Kent State? 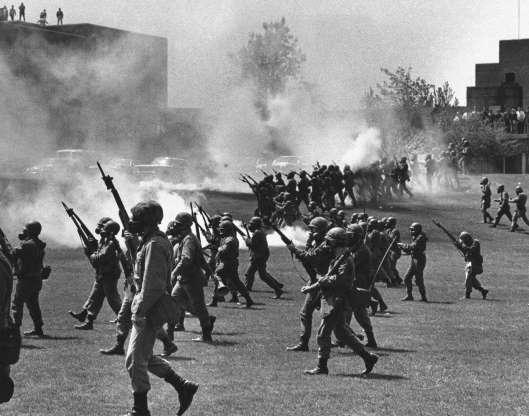 "By Monday, May 4, things reached a boiling point, and students weren't just protesting the war anymore, but also the armed guards stationed on their campus with military-grade weapons. (There were an) estimated 2,000 people who gathered that afternoon in a demonstration beset by the "toxic waters of the 60s flowing together in one place," according to historian Howard Means, who wrote a book on the incident, "67 Shots: Kent State and the End of American Innocence."

So now, we are beset by the toxic waters of the 21st Century flowing together, in places around the USA. Some say that history doesn't repeat itself, but it rhymes. What rhymes with Kent State?

The National Guard has always been unimpressive.

Yes 4 seems rather paltry, these days, when T rump is going for 200K, looks like.

And that’s no joke guy.

Yes 4 seems rather paltry, these days, when T rump is going for 200K, looks like.

Most people can easily see the difference between unhealthy old people potentially dying from a novel disease and the National Guard shooting college students. But most people don't suffer from Trump derangement syndrome.
timb May 6, 2020, 6:42pm #6

Hmm. That “TDS” answers a lot for you. As if my hatred of T rump is the source of all of his screw-ups.

Might it, instead, be possible that his continual screw ups are the source of my hatred?

Yes the latter seems more likely. I don’t think my hatred has the sort of power over the big fat baby as to make him be so dangerous in his incompetence.

And you say that I am blinded to the difference in soldiers killing 4 college students and 10’s of thousands of old, sick people, and some healthy ones too, dying because of T rump’s decisions.

No I see the difference. 10’s of thousands of lives, for one thing.

Remember, not long ago, T rump went all dramatic, saying that when he decides about opening up the economy, it will be the most important decision he has ever made?

It seems he has made his decision. Although he continues to try to have it both ways, and gives a brief nod to doing things “safely”, he has basically challenged the American people to open the economy up, by being “warriors” and facing the prospect of illness and death for themselves and their loved ones.

T rump is full speed ahead, because his narrative for re-election is that the economy will be great again before the upcoming election. That is what he cares about. Not the lives of others.

(I mean, he’s safe. He and everyone in direct contact with him gets tested regularly for C-19. While many at risk populations, still do not have real access to get tested.)

I fear that in some places, the people will become slap-happy with their “God-given” freedom to expose others to disease. And as social distancing is undermined more and more, we will now be going into a resurgence of the C-19 long before the first wave of the infection could be extinguished.