This thug dishonors the memory of George Floyd 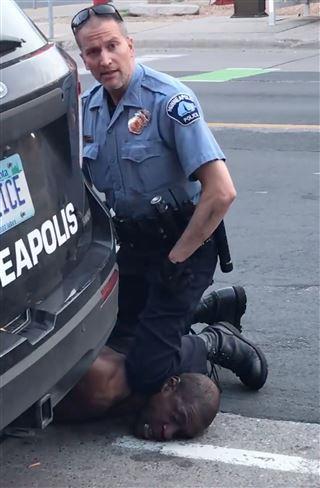 By being a free man after starring in the snuff film in which George Floyd was murdered, Derek “the knee” Chauvin, dishonors the memory of the man he killed.

The FBI is stalling on charging Derek “the knee” and his former policemen accomplices. I smell a T rump in the woodpile. It may well be that the Department of inJustice is trying to find a justification (that will fly) to say that no crime was committed. This could well be what they are doing, if T rump is having his personal legal team and campaign helpers, headed by the Attorney General, put their collective knee on the scales of justice.

Riots are the speech of the unheard. The burning down of the precinct building, last night, where the former cops who murdered Floyd were stationed, is quite a statement.

Tin soldiers and T-rump coming. What will this evening bring if the FBI falls in line with the DOTUS’s campaign plan to highlight his support of law enforcement who murder black men?

T rump has tweeted that he is ready to send in the military, and that with looting there will be shooting. He is envisioning how excited his supporters will be when black looters are gunned down.

What will this evening bring if the FBI falls in line with the DOTUS’s campaign plan to highlight his support of law enforcement who murder black men?

I know I'm usually in the "everybody just calm down" camp, but this time, mmm, light 'em up. It would be great to see some sort of demonstrations in other cities, maybe some kind of "burning man" thing where they build models of police stations and burn them down. Lots of liberal pastors, old white ladies and kids in attendance would help, not organizing it, but attending it. Seeing a MAGA in the crowd would make it even better.

This isn’t some grainy video, this isn’t a “bad apple”, this isn’t difficult to interpret. Scenes like this have been played out for years now. The training videos are in place and the cops have seen them. They have had plenty of time to process this and talk among themselves.

I’m seeing lots of these from friends on facebook, and friends of friends:

Just so people are clear about what happened in Minneapolis last night. Police did not unload on the protesters to stop looting. That was happening way off in the distance. Police were unloading on everyone protesting in front of Precinct 3. The arson and widespread looting down the lake street, only happened after loads of us were hurt from volley after volley of tear gas, mace, concussion grenades, and sponge rounds. It was completely indiscriminate I was hit in the butt while walking in the street away from the precinct. A CS canister hit me square in the forehead knocking me to the ground and blinding me for an hour while I was simply kneeling in a grassy area some ways from the police. Police weren't 'responding' to an ongoing riot they CAUSED it. First with their murder of George Floyd and refusal to prosecute the criminals, and second through their massive repression against protesters who never crossed a police line or endangered any cop. The photos your all seeing is the righteous fury of a people denied justice by their city.

The FBI is stalling on charging Derek “the knee” and his former policemen accomplices.

I knew this would happen! Upset as I was with the cop in the picture you posted above, I couldn't believe that Officer Derek Chauvin would do what he did (deliberately killing Floyd in broad daylight) in the video I saw. But civilized society demands that every citizens must be presumed innocent until proven guilty. Mayor Frey is a coward. Firing the officers without due process incited the riots. Trump must not back down and bring in the military to restore public order immediately.

I wouldn’t be surprised if the autopsy yields evidence to absolve the cop from all four levels of culpability: purposely, knowingly, recklessly, and negligently causing Floyd’s death.

I did some research to make sense of the George Floyd situation. Below are from various news sources:

On Monday night, an employee at a Minneapolis grocery store called police after Floyd allegedly tried to pass a counterfeit $20 bill.

The city on Thursday released a transcript of the 911 call that brought police to the grocery store where Floyd was arrested. The caller described someone paying with a counterfeit bill, with workers rushing outside to find the man sitting on a van. The caller described the man as “awfully drunk and he’s not in control of himself.” Asked by the 911 operator whether the man was “under the influence of something,” the caller said: “Something like that, yes. He is not acting right.” Police said Floyd matched the caller’s description of the suspect.

At 6 feet, 6 inches, Floyd emerged as a star tight end for Jack Yates High School and played in the 1992 state championship game in the Houston Astrodome.

Floyd was charged in 2007 with armed robbery in a home invasion in Houston and in 2009 was sentenced to five years in prison as part of a plea deal, according to court documents.

Floyd landed a job working security at a Salvation Army store in downtown Minneapolis. He later started working two jobs, one driving trucks and another as a bouncer at Conga Latin Bistro, where he was known as “Big Floyd.”

Floyd leaves behind a 6-year-old daughter who still lives in Houston with her mother, Roxie Washington, the Houston Chronicle reported. Efforts to reach Washington on Wednesday were unsuccessful.

Floyd also worked as a bouncer in the same nightclub and at the same time as Derek “the knee” Chauvin. So what? He’s tall, might have been drunk and might have tried to pass a counterfeit $20. What got him the instant death sentence was that he was black.

And indeed, as usual the institutionalized white-powers-that-be, continue to serve the interests of the cops who murder someone like this, they file a report that it was just routine, except the suspect just happened to die due to his “resistance” and whatever else was wrong with him. In fact the Minneapolis Police Dept, on the morning after the videotaped murder, announced in a press release that a man had died after a “medical incident during [a] police interaction.”

AND whaddaya know? The medical examiner (probably white) has found that there were “no physical findings that support a diagnosis of traumatic asphyxia or strangulation”.

As always, the white power institutions create an alternate reality to protect murdering cops. The actual view of a man being murdered in real time, by a cop kneeling on an already restrained man’s NECK until he died (for almost 9 minutes) did not cause asphyxiation? No the death, according to the Medical Examiner was likely due to Floyd’s high blood pressure, some arterial plaque, maybe some intoxicants, maybe, and the unfortunate necessity of his having to have been restrained.

In other words, according to the Medical Examiner it seems it was just a tragic incident, in which no one was at fault other than the dead black man himself.

So we are now going to be asked to believe that the 9 min video of the murder is just an optical illusion.

Derek “the Knee” Chauvin is now arrested and charged with manslaughter. (4 days after Floyd was murdered while being videoed) But the white institutions that promote and maintain the unjust perpetration of “law enforcement” actions on blacks, are working overtime to find a way to change the reality that we have all seen, into just another fine acceptable action by our boys in blue.

So keep helping the LIARS out, Sree, that seems to be your role in life, to help promote death, injustice and racism.

And deriding you for it, gives me something to do, that I enjoy. – Opposing falsities.

And deriding you for it, gives me something to do, that I enjoy. — Opposing falsities.

Likewise, my friend. It's Friday night and I wish I could pour a drink from the bottle of Talisker you caused me to buy. Cheers!

Firing the officers without due process incited the riots.

Btw, if the cops thought that Floyd was drunk, did they not also know that alcohol is a depressant that a lot of it suppresses breathing?

So one cop puts his weight and knee on Floyd’s neck while Floyd pleads for his life, begging, repeatedly saying he couldn’t breath, until he goes unconscious, and THEN the murderer continues for a few more minutes with the knee on the neck.

@sree - It’s Friday night and I wish I could pour a drink from the bottle of Talisker you caused me to buy. Cheers!

That 's a great montage to remind us of what a petty offensive pretentious blunderbuss the T rump is.