A cop kneeling on a handcuffed black man’s neck for 5 minutes. He was able to say “I can’t breath” a few times, before he couldn’t and died.

This kind of murder by cops of black men keeps happening. Although I imagine they have killed some white men this way, too, just not as often.

Btw, the cops were detaining the man for a non-violent crime. He was non-violently resisting arrest. But the cops got violent in restraining him. And they killed him.

They were fired. How about also handcuffing them, restraining them, and having someone kneel on their necks? Not long enough to kill them, just long enough to feel what it is like to be killed that way.

I think part of it is the dotard’s fault as he stirs up his racist base.

Why wouldn’t it continue? We haven’t stopped it yet.

We should stop it by keeping white cops out of black neighborhoods. Do you have any suggestions for keeping blacks out of white neighborhoods?
mriana May 26, 2020, 8:15pm #5

@sree Why do you want to keep black people out any neighbourhood? Just as not all white people are good, not all black people are bad and have every right to live where they choose and walk where they want or need to walk, just as you do.

Sree, you must have no capacity for feeling shame. Else, how could you so incessantly being either factually wrong, empathically incapacitated, or flat out ridiculous in the things that you say in your posts.

Have you forgotten that we are to judge others by the content of their characters? The color of anyone’s skin should make no difference in where one and all are free to go.

There are definitely people of poor character that I would not like being in my neighborhood nor would I like there being the imbecilic, characterologically-flawed, and aspiring dictator of my country in the White House.

Damn. Big price to pay for trying to use counterfeit money.

Floyd was arrested around 8 p.m. Monday for forgery, a non-violent crime that implies he tried to use forged documents at a nearby deli.

What? Was he trying to scam them out of a sub sandwich?

That man should have realized that being accused of a petty crime in America, is subject to immediate death by cops if you are black.

What was he thinking? Did he think that white cops would not kill him in front of witnesses and onlookers, one of whom was making a video? It’s not like this is the first time that cops have killed a man whose last words were “I can’t breath”.

In the nine-minute video, an officer can be seen kneeling on Floyd’s neck at the side of a squad car. Floyd can be heard groaning and repeatedly telling police he can’t breathe.

After about five minutes in the video, Floyd appears to go unconscious. The bystanders ask for someone to check his pulse. The officer does not lift his knee from Floyd’s neck until medical personnel arrive a few minutes later…

He was then taken to the hospital to be pronounced dead.

A knee on someone’s neck for 9 minutes. Yeah that should suffice to kill a black hot-check-writer.

You know, I think that those black-man-murdering-white-cops are NOT a credit to their race. That’s my worthy opinion. 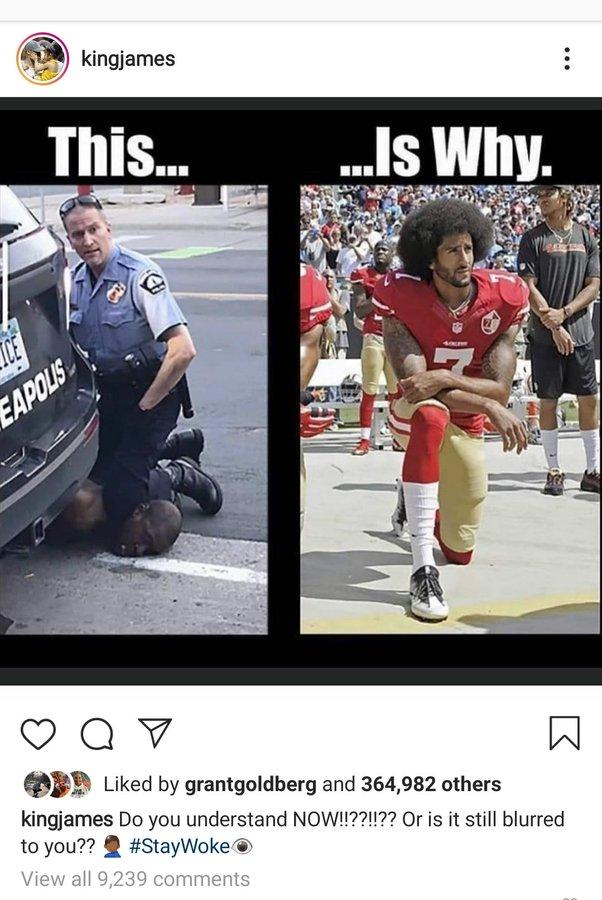 Here’s the sad part about that, Colin Kaepernick was fired for kneeling, because the NFL owners were kissing the dotard’s butt. There is nothing wrong with kneeling during the National Anthem, especially if one is protesting something, such as human rights. It’s a peaceful protest and I would gladly take a knee with Kaepernick. What I don’t understand is the reaction from the dotard’s minions- who says people kneel to God? From what I’ve seen in churches I’ve been to- Evangelical to Catholic and everything in between in my lifetime, people kneel and stand. One doesn’t have to go to the closet to pray or kneel at the altar. Some of them start praying anywhere- sitting, standing, walking, standing at the cross, kneeling at the cross, prostrated at the cross or anywhere else. Shoot, my mother prayed in bed and my aunt read her Bible while on the toilet, because God sees you anyway (Pervert). Oh that all seeing eye in the sky… it’s a real pervert for sure. So I see nothing wrong with a peaceful (and quite reasonable) protest that involves kneeling during the National Anthem. The protest, which few seemed to understand, including the stupid dotard himself, did involve racism. It involved the treatment of people of colour- oppression and police brutality. Black men get it worse than black women and IMHO any reasonable and decent person would protest with them because this is/was about human rights. Here’s something to ponder- As people of colour’s rights are taken or oppressed, so are women’s rights too. So this should be a human rights protest for all of us. People should be protesting how people of colour are treated. However, what happened to Kaepernick is all the dotard and his butt kisser’s fault with their demand for “flag worshipping”.

What was he thinking? Did he think that white cops would not kill him in front of witnesses and onlookers, one of whom was making a video?

He wasn't thinking and that's why he came to grief. As usual, these videos never tell the whole story and used to incite black folks. Here is a better video. It explains why black folks seems to always get it in the neck.

Mriana, the NFL came down hard on Kaepernick because they didn’t want to upset their white supposedly patriotic hypocrite fans, or to risk losing contracts in which the NFL got money for promoting the military.

So as usual, justice is not for the minorities or those with less money. And I agree with your point about kneeling. It is a universal sign of respect to kneel, UNLESS YOU ARE KNEELING ON SOMEONE"S NECK WHO YOU ARE CONSEQUENTLY MURDERING.

Sree. I imagine that Chris Rock would be excited to see how you use his comedy bits as a way to make light of and help us condone the blatant murder of a black man by white cops.

BTW, we don’t know that Floyd (the murdered man) did any of the funny feaux paux that Rock describes as warranting a beating (but not murder) of a black man. Floyd was ALLEDGED to have done or tried to do some kind of forgery at a Deli.

So you are defending the public murder of a black man for being alledged to have committed a non-violent crime. A petty white collar crime.

Next time you cheat on your taxes, would it be okay if 4 black cops cuffed and restrained you and one knelt on your neck until you died?

Chris Rock could come up with a funny bit about that.

It explains why black folks seems to always get it in the neck. -- Sree

Ok, you got me. I was watching Hannity's segment on that white cop kneeling on the black guy. Hannity felt it was hard to watch the video and couldn't justify the white cop's knee on a non-violent black guy's neck. I am not a liberal. I know when wrong is wrong. Ok?
mriana May 27, 2020, 10:37pm #17

A knee to the neck is always wrong. The cop who put his knee on the black man’s neck should have gotten more than a firing. He should have been thrown in jail, tried for murder, and sent to prison.

What if a white cop puts his knee to a white man’s neck? Is that ok?

@sree what was my first sentence in my last comment?