The Vanishing Legacy of Barack Obama

On the road from stirring symbol of hope and change to the Fat Elvis of neoliberalism, birthday-partying Barack Obama sold us all out

It is amazing how complete is the delusion that beauty is goodness.

A former president flying half the world’s celebrities to spend three days in a maskless ring-kissing romp at a $12 million Martha’s Vineyard mansion, at a moment when only a federal eviction ban prevented the outbreak of a national homelessness crisis, was already an all-time “#### the Optics” news event, and that was before the curveball. Because of what even the New York Times called “growing concerns” over how gross the mega-party looked, not least for the Joe Biden administration burdened with asking the nation for sober sacrifice while his ex-boss raised the roof with movie stars in tropical shirts, advisers prevailed upon the 44th president to reconsider the bacchanal. But characteristically, hilariously, Obama didn’t cancel his party, he merely uninvited those he considered less important, who happened to be almost entirely his most trusted former aides.

On the road from stirring symbol of hope and change to the Fat Elvis of neoliberalism, birthday-partying Barack Obama sold us all out

And Tax payers paid for all the costs? Where are the facts? Allegations are cheap.

If he paid for this out of his own pocket, what’s the problem?

He goes on.
Obama was set up to be the greatest of American heroes, but proved to be a common swindler and one of the great political liars of all time — he fooled us all. Moreover, his remarkably vacuous post-presidency is proving true everything Trump said in 2016 about the grasping Washington politicians whose only motives are personal enrichment, and who’d do anything, even attend his wedding, for a buck. Trump’s point was that he, Trump, was already swinishly rich, while politicians have only one thing to sell to get the upper class status they crave: us.

Obama did that. He sold us out, and it’s time to start talking about the role he played in bringing about the hopeless cynical mess that is modern America.

Obama was set up to be the greatest of American heroes, but proved to be a common swindler and one of the great political liars of all time — he fooled us all.

Really? What makes you say that? The dotard, you’re beloved faux president was far worse and told thousands of lies. Trust me, the dotard wanted personal enrichment more than President Obama ever did. He lied to you when he said he would refuse a paycheck while in office, but he was hardly rich. He declared bankruptcy more than any one in the U.S.

Blockquote Obama did that. He sold us out, and it’s time to start talking about the role he played in bringing about the hopeless cynical mess that is modern America.

Actually, your dotard screwed us all far more than even the Shrub did. President Obama told far less lies and actually improved the economy while in office. Every Repug in recent years destroyed the economy.

On Obama I’d also recommend Paul Street’s series of books on him “Barrack Obama and the Future of American Politics”, “The Empire’s New Clothes” and “Hollow Resistance” (the middle one is hard to find) or for a one-volume collection of excellent articles that demolishes the supposed legacy, “Hopeless - Barack Obama and the Politics of Illusion” by Jeffrey St. Clair & Joshua Frank.

Obama’s only legacy was that a Blackish man with a funny name could be elected president.

His recent behavior is nothing out of the ordinary and does not tarnish that legacy one bit.

Obama did that. He sold us out, and it’s time to start talking about the role he played in bringing about the hopeless cynical mess that is modern America.

Obama left a mess? Who do you listen to? Or are you creating this false news yourself? Stop that!
Don’t prove my original assessment of your adversarial intentions.

You know who sold us out? TRUMP!!!

He started selling the US out from the first day with his inauguration.

What Has Happened to the Surplus Funds from Trump’s Inauguration?

Though no disclosure records currently exist, and Trump’s PIC is not answering questions about its expenditures, given the relatively small size of this year’s inauguration it is reasonable to estimate that at least half or more of the $107 million raised by Trump’s Inaugural Committee could remain leftover as surplus, at least if it was spent in line with previous inaugurations.

So what has happened to all this money? Does a substantial surplus in fact exist? If not, why not?

Trump’s Inaugural Committee has stated that it will donate the surplus to charity, but so far the committee has said that only a certain amount has been spent for renovations of the White House and the Vice President’s residence and another $3 million has been donated to hurricane relief.7
That apparently leaves tens and tens of millions of dollars unaccounted for.

You question the role Obama played to get us out of the hopeless cynical mess Bush left us and his actual accomplishments, in spite of McConnell’s promise he would be a one term president and who opposed him every step of the way.

Here are 28 of President Obama’s biggest accomplishments as President of the United States in spite of that blatant opposition.

1 – Rescued the country from the Great Recession, cutting the unemployment rate from 10% to 4.7% over six years

4 – Ordered for the capture and killing of Osama Bin Laden

10 – Began the drawdown of troops in Afghanistan

11 – Signed the Deferred Action for Childhood Arrivals allowing as many as 5 million people living in the U.S. illegally to avoid deportation and receive work permits

15 – Began the process of normalizing relations with Cuba

21 – Signed the Hate Crimes Prevention Act, making it a federal crime to assault anyone based on sexual or gender identification

24 – Nominated Sonia Sotomayor to the Supreme Court, making her the first Hispanic ever to serve as a justice 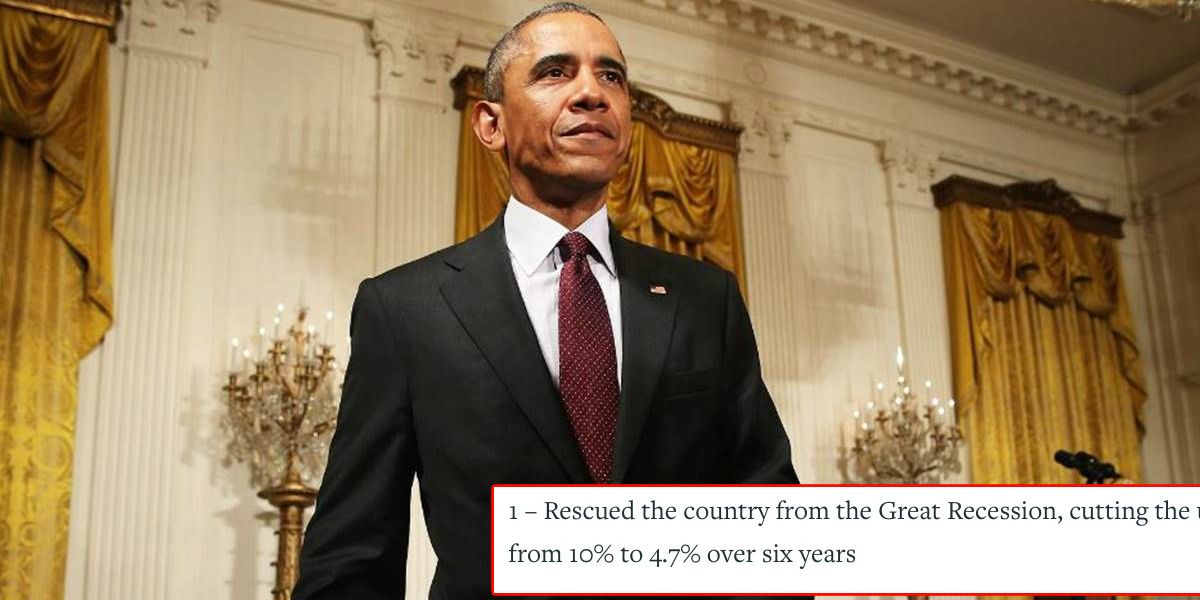 What would you add or remove from this list?

I have great doubts about your friendly intentions toward the US and from now on I shall consider my answers to you in that light.

Intention definitely not to be part of the echo chamber on this forum. You missed
More illegal wars
The prosecution of jounanalists and whistleblowers
The trillions of dollars in corporate welfare to wall street terrorists in the form of TARP
The terrorist drone attacks
The pivot to Asia and preparation of war with China
The support for regime change in Venezuala

Intention definitely not to be part of the echo chamber on this forum. You missed

:
Apparently that is what you missed in your foreign affairs drivel:

Taking the US economy from the brink of great depression and 10+% unemployment to a thriving economy and 4.6 % unemployment in 6 years in spite of persistent opposition by the Republicans.

Perhaps you are now going to bring up the false allegations against Hillary Clinton and her illegal server and her treasonous dereliction of duty in the Ben Gazi affair?

You are not inquiring or informing about anything . All you do is sowing manufactured falsehoods.

There you go. The real DJ has arrived. The air has just become toxic.

Yes coming at you from the left and you can’t handle it.

Yes coming at you from the left and you can’t handle it.

What left? From my left or from left field. I don’t have to handle anything you spout.
You are your own worst enemy. The more rope I give you the higher you hang yourself with it.
Be my guest.

p.s. Did you get your vaccination yet?

Not even the famed glossy Bible of the unapologetic rich seemed sure of whether to write Obama’s Birthday bash straight or as an Onion headline: what did the “Event of the Season” mean during a pandemic?

At least we know where all that money went. With Trump’s modest inauguration all the 120 million dollars just disappeared altogether. Is that why we don’t talk about it?

We don’t know where it all went, so that’s ok.

And what exactly is the LEFT politically speaking? Give me something positive about the political LEFT as you see it.

You cant respond to the criticism. You have to rely on your safe space right wing talking points such as "Have you taken the vaccine "

That is an evasive answer.

I am trying to get a “feel” for your mindset. OK?

However, I am still waiting for something positive, a constructive suggestion.

Do you have any? Educate me. I am here to learn just like everybody else.

Yes. Stop being a sycophant for the Democrats