This is something I came up with a few years ago and certainly seems appropriate to post about on the day I see a headline stating that 99% of Republican evangelicals oppose Trump’s impeachment. I went back and forth over whether to post it in the religion or political section and finally decided on the religion section. While it is very relevant in the political world, it is ultimately a purely religious concept.

Essentially this is an offshoot of the old philosophical dilemma, “If you could go back in time and kill Hitler as a baby, would you do it?” The major difference is that this is more specific and with additional moral implications.

The concept is that many Christians today are trying to build a bridge to Heaven using the devil’s tools. Originally I had envisioned only simple, obvious things like lies, but in the last couple of years have realized that it includes actual, physical tools, like ex-Ohio State Representative Wes Goodman, a staunch opponent of LGBT rights who left office in disgrace when it became known that he was having gay affairs in his physical office. Several Christian conservative groups, including Citizens for Community Values, supported him politically, even though they were fully aware of his double life. Board member Seth Morgan admitted to having discovered it after endorsing him in the previous election. But they continued to support him anyway because they were getting what they wanted from him.

There are many other examples, but I’m sure you get the point from that one. Just note that it’s not just politics I’m talking about, but also “Lying for Jesus”, using sex to convert people, etc.

From the perspective of an ex-Christian I find it insane that you would, essentially, hire the devil to fight the devil. It is squarely against some of the most basic principles of the most quoted Bible verses, particularly “A house divided against itself cannot stand.” In that text in the Bible Jesus casts demons out of a man and is, himself, accused of being demonic. It was claimed that demons gave him the power to cast out demons, to which Jesus replied that was impossible. The demon would be fighting itself and would destroy itself. So how can any supposed Christian justify using the devil’s toolbox to build their bridge to Heaven? As an ex-Christian it just seems absolutely ridiculous to me that any Christian would even have to take a moment to consider this. It’s a no brainer. The devil will absolutely not give you a piggy back ride to Heaven, stopping to buy you lunch on the way. If he’s loaning you his tools then you ARE using them for evil, the end.

But many current Christians don’t seem to see it the same way. The thing is, if you ask ANY of them if the devil can, in any way, help you get to Heaven you will get a resounding “No!” If you ask them if there’s any way you can walk with the devil AND go to Heaven, the same answer. Yet they manage to justify this to themselves. And yes, I am aware that logic and critical thought are not exactly strong points for these people (this is not a simple claim I am making, multiple studies have shown this). But come on! Even their own most basic beliefs are confusing to them?

I think what the evangelicals want is screwed, because “the mandate of Heaven” is a supernatural concept. As such the evangelicals don’t get to choose if it comes or goes. That is up to Heaven. Heaven may want to give its mandate over to Mike Pence.

God is in control. It is his will. God can work with anyone. The Lord writes straight with crooked lines. Everything is working to benefit the Lord. If Trump is in the Oval Office, it’s because God put him there. We are to trust and respect our leaders. Nobody is perfect.

The really weird thing is, none of this applied to Obama, when HE was in the White House.

I have no answers.

I do have, however, one of my top-rated answers on Quora, to the question “Why do Evangelicals continue to enable Trump?”

I jotted this almost a year ago, in about 10 minutes, and I had no clue it would take off like this. In its different locations on Quora, it has almost 6,000* “upvotes” (endorsements) from all over the world, including some political science profs and at least one Congressional aide.

But the best part is the comments below, from atheists AND Christians. Wow.

And everything is even worse now.

Oops. It won’t let me edit my edit.

The answer I have over 10,000 upvotes to is actually this one: 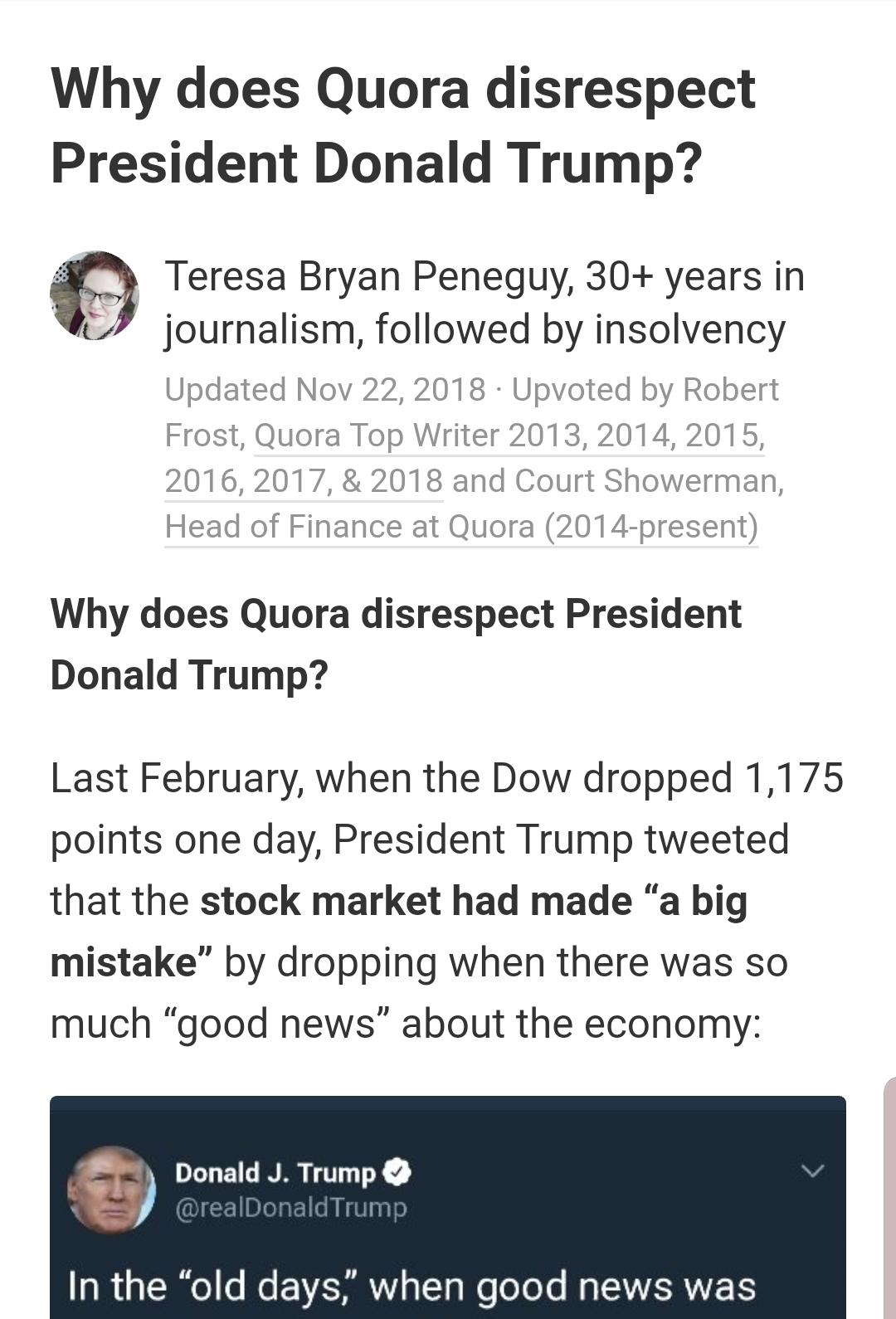 The one I mentioned above is this one: 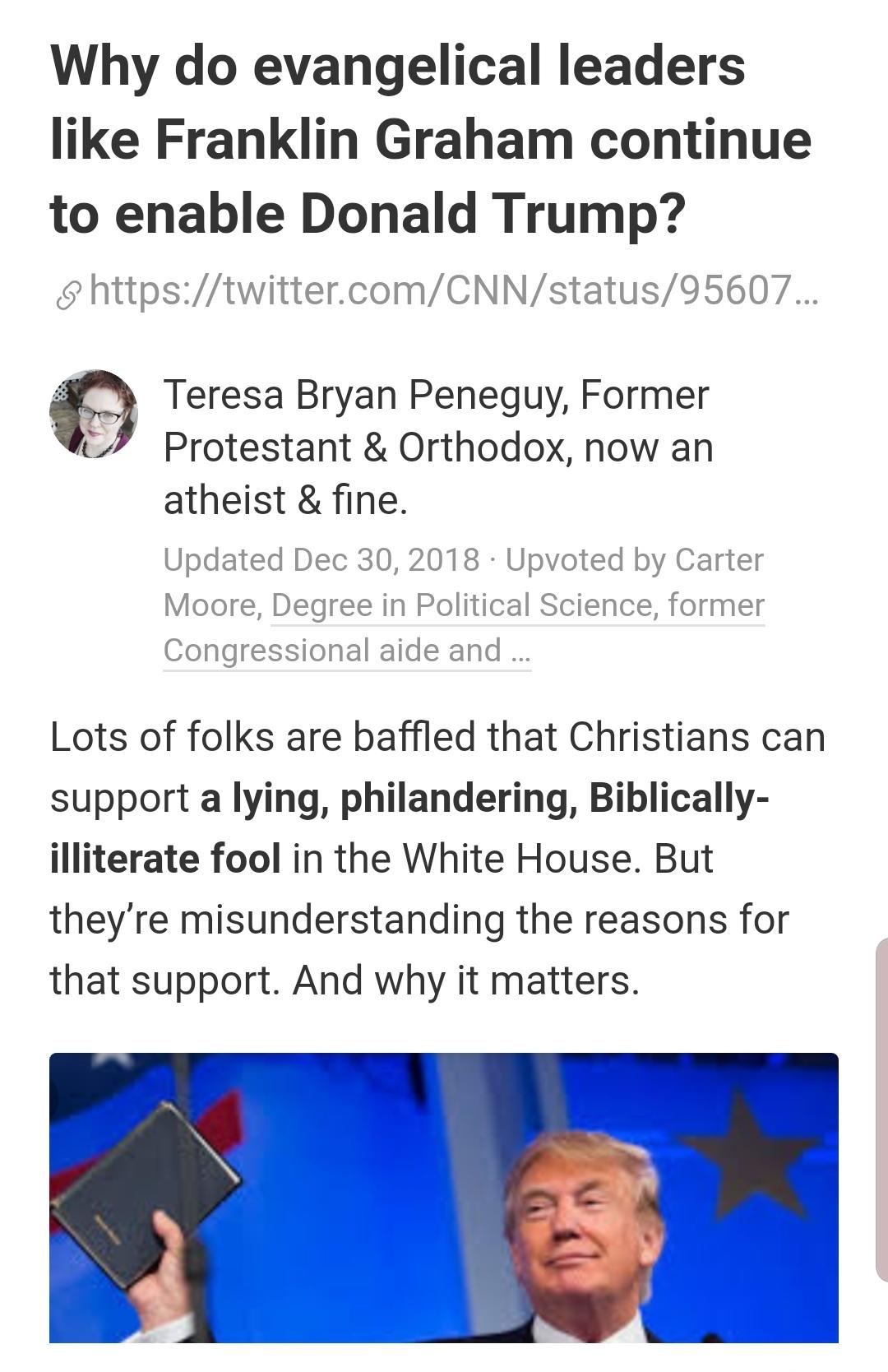 The only thing he has done that any Christian could publicly and openly endorse is appoint Supreme Court justices who MIGHT rule against abortion. Other than that even if they like it they can’t own up to it.

On the up side I found this old video of Trump back when he still had hair that’s pretty telling. Don’t know how to paste it “inline”.

Well, depends on what you mean by Christian.

His Administration did get the so-called “Religious Liberty Task Force” started:

They got Jerusalem as the US Embassy:

They are working to curtail LGBT rights:

The Evangelicals have so far been happy with them:

@Widdershins, I understand what you are trying to say here. None of the shit the Trunp administration is doing seems very "Christian," if you are using the sort of vernacular meaning... a synonym for "good."

It’s an insidious nuance, but it matters.

You have a point. And he does support “religious freedom” bills. And he took a jab at LGBT people with his transgender military ban. So there are a few “hot button items” that Christians can really get behind. And for the low, low price of their barely used soles, they do.

And for the low, low price of their barely used soles, they do.

I wonder what a human soul goes for these days in Washington DC?