So I have this buddy who keeps having repeating dreams. ot started after a car crash where he kept hearing “it’s not time”, then saw a paramedic by the name of Jason A.D… Once released, he asked if he could talk to that paramedic and there never was a guy that worked there by that name. Following this, he had dreams/visions of him “absorbing” what he said were dark entities of some sort. he said 3 times this happened were dreams and 4 other times he said he was awake and had a vision of it. so this equals 7. Ever since he was young, he claims to be able to see spirits, demons, ect. but sees more dark ones than nice ones. on multiple occasions, he said that he will go to someones house to help with their “ghost” problem and when he talks to them, they almost all say the same thing. (paraphrasing here) “you and the 7 have bigger plans.” or when the spirit isn’t dark, it will say “you and the 7 cant hurt me”. He said about 2 or 3 times, he has just blacked out for an entire day and doesnt know where he goes. his wife says he tells her he has things to do and doesnt see him all day. this happened only on Thursdays. After looking into it, the only theory I have is the 7 fallen Angels. does anyone have any idea what is going on? Any type of lore relating to this? Anything is helpful. thank you in advance

Just a quick google type check, revealed this website for the discussion of paranormal topics.

You don’t really seem to be in the market, ultimately, for attempted rational discourse re: the events you refer to. If you have bought in to developing a joint supernatural narrative with your friend, the linked site, might provide a verbal community that, I would guess, would be more likely to help address that goal.

Sorry Colin, but I have no way of helping you in a way you are likely going to appreciate.

I’d say your friend has some psychological issues. He should go talk to a real doctor to get help. Hopefully he avoids going to a religious person for help, as they will only reinforce his delusions and likely make the problem worse in the long run.

Your ‘theory’ of 7 fallen angels sounds like a just-so-story that ‘explains’ the situation without explaining anything. Not sure how you looked into it to get to that explanation, but the idea that the number 7 is relevant is a completely baseless assumption (would you have thought 5 was relevant after the fifth episode, then 6 after the sixth?). Thinking the number 7 is relevant will only cloud your ability to look into it with an open mind.

Best of luck and I hope all turns out well.

Could you tell me a little bit more about this “7 fallen angels” theory? Are you by any chance talking about the seven senior demons who were said to each be in charge of one of the seven deadly sins (lust, gluttony, sloth, pride, and so on). If so, what does this have to do with Jason?

Bashful- demon of gluttony and poor body image from being overweight

Doc- demon of pride and thinking you are god

Sneezy- demon of pollen sensitivity (he’s a bad one)

Just thought of a fascinating book ,I read it about 30 years ago and found it interesting, but inconclusive. Worth a glance.

"An Experiment with Time is a book by the British soldier, aeronautical engineer and philosopher J. W. Dunne about precognitive dreams and a theory of time which he later called “Serialism”. First published in March 1927, the book was widely read and influenced the imaginative literature of the day. Dunne published four sequels: The Serial Universe, The New Immortality, Nothing Dies and Intrusions? "

I remembered the future in a dream where I said that that is a bunch of woo.

Oh my! It came true.

Yeah, that was pretty much my conclusion about Dunne’s book too.It WAS written in 1929, and was very popular, and not just with the hoi poloi.

–I have three kinds of dreams; Mish mosh; the events of the day all mixed up, Wish fulfillment dreams. usually about lost loves, and often very sad. Finally there are the predictive dreams. None have come true, and I’m relieved.----Coming true, in detail, would really shake up my zeitgeist.

I really don’t know if people are becoming more gullible due to IT, less gullible or about the same.

I think I can say with some confidence less gullible than as in the Middle ages. EG holy relics were a major cottage industry. One could buy such things as ; breast milk from Virgin Mary, straw from the manger in which Jesus was born, pieces of wood from cross to which Jesus was nailed. Plus of course nails from the cross. It has been said that at one point there were enough pieces of wood from the cross to built a small house, and enough nails to finish the job.

When visiting Italy, I went to a lot of beautiful old churches. Most had a holy relic of some obscure saint. A few had your actual holy saint, rotting away inside a glass. Revolting.

In Italy there are two churches with head of John The Baptist. I saw one. The priest explained their’s was the real one. He became peeved when I suggested a simple solution; it was obvious that the heads were of John The Baptist at different ages.

BUT 20th Century: The Nazis got hold of the “Spear of Destiny”, the one used to pierce the side of Jesus cross. It seems the name of the soldier was ‘Longinus’,.The sword makes the holder invincible in battle. Didn’t work too well for the Nazis. Of course, over the centuries, the sword has had several new shafts and a few new heads. I’m not making much of this up, you know.----------------------

“The Holy Lance, also known as the Lance of Longinus (named after Saint Longinus), the Spear of Destiny, or the Holy Spear is legendarily known as the lance that pierced the side of Jesus as he hung on the cross.”

The Holy Lance in Vienna is displayed in the Imperial Treasury or Weltliche Schatzkammer (lit. Worldly Treasure Room) at the Hofburg Palace in Vienna, Austria. It is a typical winged lance of the Carolingian dynasty.[10] At different times, it was said to be the lance of Saint Maurice or that of Constantine the Great.[11] In the tenth century, the Holy Roman Emperors came into possession of the lance, according to sources from the time of Otto I (912–973). In 1000, Otto III gave Boleslaw I of Poland a replica of the Holy Lance at the Congress of Gniezno. In 1084, Henry IV had a silver band with the inscription “Nail of Our Lord” added to it. This was based on the belief that the nail embedded in the spear-tip was one that had been used for the Crucifixion of Jesus. It was only in the thirteenth century that the Lance became identified with that of Longinus, which had been used to pierce Christ’s side and had been drenched in the blood of Christ and water.[10]"

Maybe the Spear of Destiny was a placebo for Hitler, as he was pretty much an invincible conqueror for awhile after he took custody of it.

I guess anything’s possible. He does seem to have been a smidge fracking nuts. (have you ever read the report The US had their psychologists do on Hitler?)

Had a long discussion with a mate last night about the blunders Hitler made. There were a lot of 'em, from the very beginning .His anti Jewish obsession in itself could have cost him the war. IE The best German Jewish minds either fled the country or were executed. Just imagine what would have happened if Germany had the Bomb first… A terrifying thought, especially for Russia

I beg my Jewish friends to take no offense when I say that if I could go back in time and kill baby Hitler, I wouldn’t. 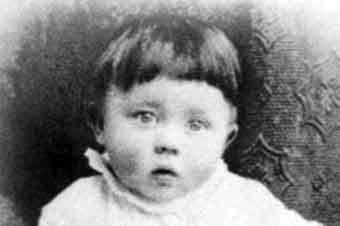 Would I kill baby Adolf?

Of course not. The reason for doings so is based on a particular view of history, which I do not share. I call that view’ The great man theory of history"

My view is that ‘great men’(and women) tend to arise as the result circumstances. This tends to be in periods of social changes/harsh conditions;

This is not my original theory. It comes in part from Emile Durkheim’s theory of “anomie”. Mainly though, it’s based on Victor Turner’s book on ‘liminality’ and ‘liminal figures’

Turner (and I} would argue that had Hitler not been born , another leader would have emerged; perhaps Goering, from being associated with Ernst Rohm. The outcomes may have been different. I guess it depends how much you accept the notion of historical determinism.

I present an alternative view, which makes sense to me as rule of thumb, but not necessarily universal principles. This comes under my broad position of rejecting individual theories of social change. My position is that social change occurs as the result of a great many events, large and small and all together impossible, impossible to identify and measure.

Both theories have been modified and expanded since the publication of each book. There are oceans of information on line, even some videos on youtube

Well that’s sort of the reason I wouldn’t kill baby Hitler, that someone else might take his place and wind up worse, or that other worse events might have ensued. Also, he’s so cute.