RUSSIAGATE- ANOTHER KNIFE TO THE STOMACH

This week dedicated Russiagaters had a short yet intensive thrill ride, after it was revealed that a whistleblower had complained about President Donald Trump having an inappropriate phone conversation with a foreign leader. The gotcha moment soon passed as sources of various media outlets claimed that the foreign leader was not Vladimir Putin of Russia but rather Volodymyr Zelensky, the freshly elected leader of Ukraine

You think that makes it cool dude?

P, You are obsessed with Russia"gate". You have been indoctrinated inside out and top to bottom with the idea that Russia is just a sweet country that we are making the fall guys for all of our ills. You brought this up. So why ask “Russia again?” When you are the one that brought it up again.

You seek scraps from any source to try to prop up the conspiracy theory that you believe your so-called Russia"gate" to be.

Timb thinks Ukraine is Russia. Hey Uncle Tom Timb - give it up.

give it up yourself

Trump Playing the chump for Putin …

Current and former spies are floored by President Donald Trump’s fervent defense of Russia at this year’s G7 summit in Biarritz, France.

“It’s hard to see the bar anymore since it’s been pushed so far down the last few years, but President Trump’s behavior over the weekend was a new low,” one FBI agent who works in counterintelligence told Insider.

At the summit, Trump aggressively lobbied for Russia to be readmitted into the G7, refused to hold it accountable for violating international law, blamed former President Barack Obama for Russia’s annexation of Crimea, and expressed sympathy for Russian President Vladimir Putin.

One former senior Justice Department official, who worked closely with the former special counsel Robert Mueller when he was the FBI director, told Insider Trump’s behavior was “directly out of the Putin playbook. We have a Russian asset sitting in the Oval Office.”

A former CIA operative told Insider the evidence is “overwhelming” that Trump is a Russian asset, but another CIA and NSA veteran said it was more likely Trump was currying favor with Putin for future business deals.

Meanwhile, a recently retired FBI special agent told Insider that Trump’s freewheeling and often unfounded statements make it more likely that he’s a “useful idiot” for the Russians. But “it would not surprise me in the least if the Russians had at least one asset in Trump’s inner circle.”

unfortunately the Democrats continue behaving like lame dolts - so who know’s how hideous it’ll get before its finished.

Ukraine Phone Call Is the Russian Trump Tower Meeting on Steroids Emboldened by a Congress that refuses to impeach, Trump is taking his dirty tricks to a whole new level

If the emerging details are accurate, Donald Trump’s efforts to get Ukraine to interfere in the 2020 election are not just a repeat of his overtures toward Russia in 2016 — they’re worse.

The Wall Street Journal is reporting that, on a late-July call with Ukraine’s president Volodymyr Zelensky, Trump pressured the Eastern European leader “about eight times” to support Rudy Giuliani’s efforts to dig up dirt that could damage the presidential campaign of Joe Biden.

(A bit of context is helpful here: Biden’s son Hunter was involved in an energy deal in Ukraine. Giuliani, Trump’s personal lawyer, has made unsubstantiated claims that Joe Biden pressured the Ukrainian government, during his term as Vice President, to benefit his son. “Not one single credible outlet has given credibility to these assertions,” candidate Biden told reporters Friday. Ukrainian officials have previously said they have no evidence of wrongdoing by the Bidens.)

At the time of the phone call between Trump and the Ukrainian leader, $250 million in U.S. military aid to Ukraine had been authorized by Congress, but not yet delivered by the Trump administration. The aid was vitally needed: Ukraine is menaced by Russia, which annexed Crimea from Ukraine in 2014. According to the Wall Street Journal report, the status of this funding was not directly mentioned by Trump on the phone call. But it was, inescapably, hanging in the balance.

P, you called me Uncle Tom. You are an odd fellow.

Once I spend more than an hour or so on a story like this, I start wondering what percentile I fall into. I wonder how many people are just wondering if Biden really tried basically the same kinds of blackmail but has not yet been investigated for it. When the link says, “that’s been debunked”, do people click on that, or do they just throw their hands up and think it’s too complicated and everyone is lying anyway? When I think about how many old news stories are still floating around as they have unanswered questions, I tend thing the vast majority don’t bother trying to sort out facts.

The facts don’t get much simpler for this. Regardless of what Trump did, the whistleblower protocol is not being followed. Trump could simply release the transcript to a few people who have high security clearance, but instead, he’s controlling the media narrative, knowing that honest people will have to say that they don’t know exactly what was said.

A really dumb comment T. Do you support fascist in Ukraine??

A really dumb comment T. Do you support fascist in Ukraine??

Can you explain just how you inferred that?

A few years ago I was considering moving to Odessa to teach in an English-immersion school. I remember when Russia took Crimea in February 2014 and my heart sank.

And I remember in 2016, during the campaign, Trump saying:

Player your dance steps are divine.

That's funny, reminds me of something.

C.c why do you rely on unnamed sources??

Player it’s quite possible neither FOX or RT covered this, so you may have missed it. The magic of Google:

For centuries it has loomed large for Russian and Soviet leaders.

Russian President Vladimir Putin’s seizure of the Crimean Peninsulafrom Ukraine in early 2014 was the most consequential decision of his 16 years in power. By annexing a neighboring country’s territory by force, Putin overturned in a single stroke the assumptions on which the post–Cold War European order had rested.

Of course, these are merely referenced news stories and not Putin’s actually orders, so perhaps that’s all Players need in order to dismiss it from their oh so biased and blind-sided minds in order to pretend none of it happened.

And there’s so much more, just gotta poke around! Oh and a desire to HONESTLY understand what’s unfolding in front of us.

So this never happened? 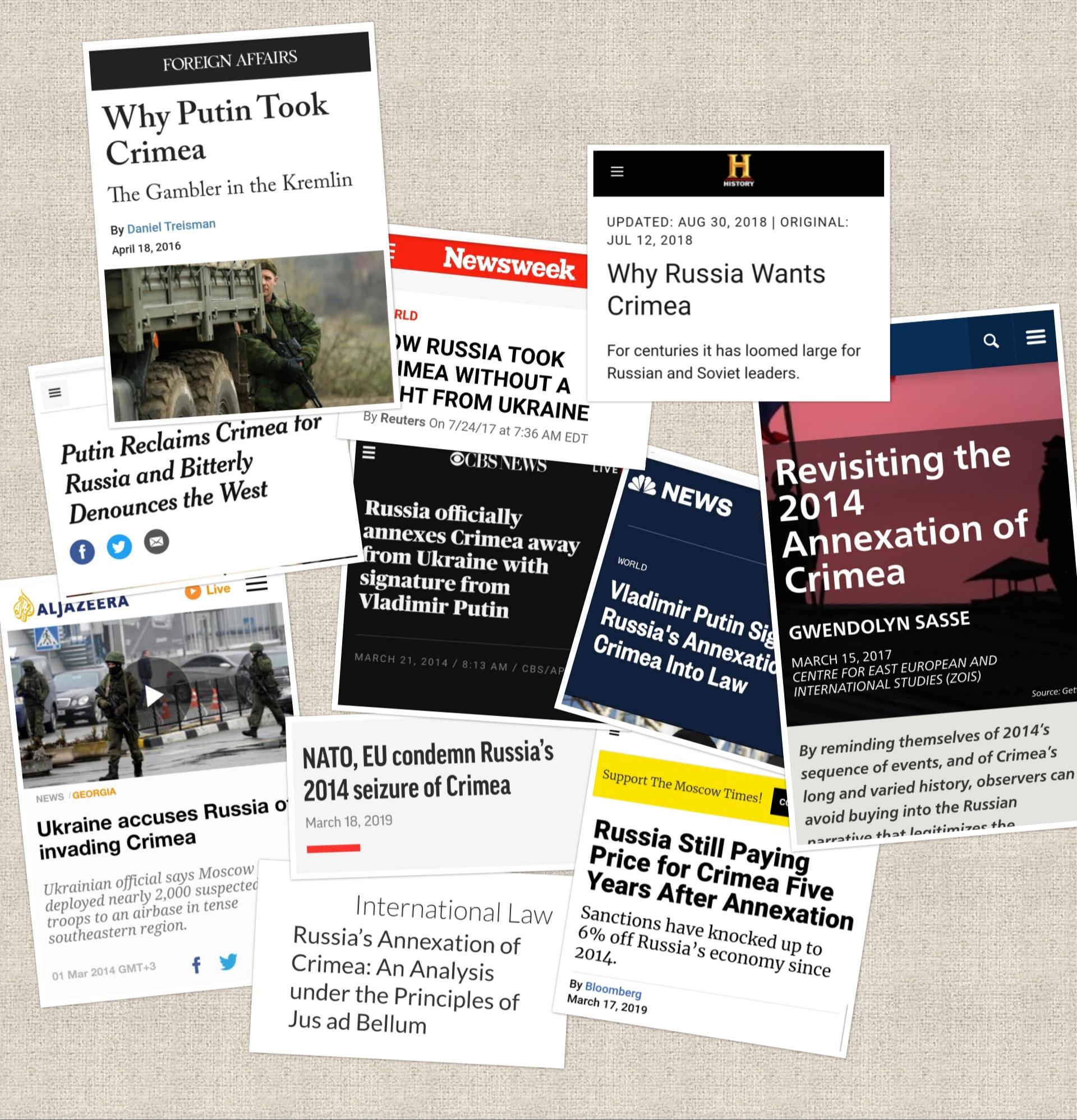 If you actually dug into the stories I think you’ll find sources names, others stay secret because that’s how it goes.

Why do you think unnamed sources are to be ignored? Especially with such a vindictive ruthless amoral team of backstabbers like the Trump Gang trying screw with and gag anyone who has anything negative to say about them.

Player do you know anything about traditional American Values - and no I’m not talking the Industrialists who happily sent children into the mines and factories twelve hours a day, six days a week. I’m talking about the principled American majority!

Player, you’re great at asking questions, how about answering some for a change:

Why is Trump’s Team so dependent on lying, stonewalling, and contempt for our Governments check and balances.

oops Player must have edited that last post of his - and it was disappeared by the gremlins. It does happen around here.