She was thrashed poor thing 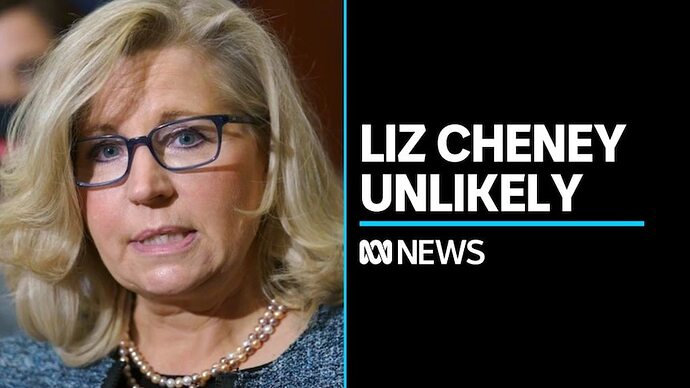 Liz Cheney to 'lose badly' in the Wyoming Republican primary

Associate Professor Kristin Kanthak says Liz Cheney is "unlikely to advance" in the Republican party as she faces off with the Trump-endorsed challenger in the Wyoming primary.

Don’t worry your sweet little heart.
Sometime losing is winning.
She’ll concede her seat, a long democratic practice.
But, you can be sure, she’s not going away.

And she does have the moral victory - even in the hearts of people who despise her political positions. Why? Because she stands for something ethical, something of dignity and honor, something much better than the base self-aggrandizement that seems to fuel the current scurvy Republican Party.

trumpsterism: ME FIRST & f…k the rest of 'em, and damned proud of it! = a guarantee for long term failure, {we are social creatures and we do depend on each other, whether we’re grown up to recognize and admit it, or not} but they don’t care because they’re just in it for themselves and the party and won’t be around to deal with the mess they leave behind.

That’s what Cheney is fighting against and that’s why she’s become the hero of many people like me, who actually despise much of what she believes - thing is, she’s got substance and stands by her beliefs, there’s a core of honest trumpeters simply can’t relate to - why should they, god is in their back pocket and trump is out front justifying and cheerleading. And there’s too few standing up to it vocally.

Thing is, yesterdays wars are over, it’s a new ball game, and all the rules are going to be changing more radically than any of us, even those paying attention, can guess at, except that the upheaval will be greater than any other in human history.

The forecast: Catastrophic weather will blindside people and destroy the infra structures we depend on.
People that survive the first rounds of decimation, you know when the sweet water and crops run out, will have to get real on a level our complacent lazy asses can’t conceive of today.
Of course, it will unfold regionally, so there’s no telling, except that it will keep spreading and eventually catch up with everyone.

Meaning this global economy we created becomes unsustainable, do the trumpster sillies ever think about consequences?

How will that system hold up against the current love affair with white xenophobia?

Meaning no more easy living. It’s not like it wasn’t coming one way or the other, still we could have slowed it down, focus on dealing the real enemy of catastrophic weather events, and new approaches to water and land management in light of changing real world condition, small adjustments in our way of doing things, would have had massive pay offs. But that needed an honest public education effort and a honest public debate. Instead we got a malicious tactically dishonest clown sidecar show. Dedicate to stupefying citizens and leaders.

But, these trump idiots have convinced themselves god is in their back pocket and that nothing is happening to our planet or future prospects, simply because they can’t handle change and doing with less expectations. Or the truth.

Mark Leibovich, staff writer for The Atlantic, talks with Alex Wagner about why Liz Cheney’s primary loss is likely not the end of her influence on the Republican Party and could be only the beginning of the nightmare she poses to Donald Trump and his acolytes.