Empathic Joe. Compassionate Joe. Joe the Unifier. Those monikers seem to fit. “Sleepy” Joe, not so much. But the t rump’s tired old tricks die hard.

Joe will be an excellent POTUS. If our form of govt can just hang in there another 5 months and two weeks.

Joe will be an excellent POTUS.

If Joltin’ Joe drools in the presence of the t rump, it will likely be in anticipation of chomping down on the big fat t rump’s rump.

But seriously, Joe the Uniter cannot come to power quickly enough. We have more suffering to go though with the t rump, who couldn’t make America great again. Who couldn’t even keep America great.

There will be much for Joe to build back. And build back better.

CC, control your impulses of despair and cynicism (though they may well be warranted).

Some say that hope must be invented every day.

The t rump should dump Pence and pick a more exciting running mate. Maybe they could go with t rump/kanye for the 2020 RepugLIARS’ ticket.

I’m OK with that. I would have like Biden/Warren, but Biden/Harris is OK too. If you remember, Kamala was my third choice in the primary- it went Sanders, Warren, Harris, for my choices, in that order.

Yes, I prefer the more progressive candidates, too. But it is not yet their time.

In terms of being a potentially winning ticket, THIS IS IT. Biden/Harris can appeal to a broad and inclusive portion of the electorate. Progressives can tolerate them. Independents and disaffected Republicans can tolerate them. All Democrats can be enthused by having a biracial woman on the Presidential ticket.

(Harris, today, may have become the most likely Dem leader of the future, in which case she could eventually become the 1st female POTUS.) 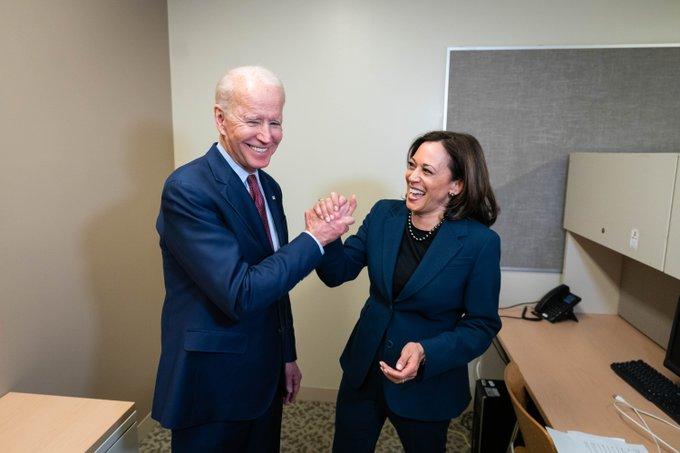 Oh look! They are so happy that they are going to beat the t rump!

Here’s 55 things to know about Kamala.

They are, but are they counting on the dotard buying the E.C. again? Hopefully, the dotard can’t buy the E.C. again this election. The orange creature is using all the tactics in the Dic[tator] play book to cheat his way back into office, including slowing down the mail.

Yes, I prefer the more progressive candidates, too. But it is not yet their time.

In terms of being a potentially winning ticket, THIS IS IT.

Unless U.S. citizens want four more years of the dotard destroying the U.S. and cheating his way back into office again, thereby continuing to destroy the U.S., yes, it is the progressives time. It really is their time. They are the only way we can undo the damage the dotard has done.

In terms of being a potentially winning ticket, THIS IS IT.

I am glad that you have something to look forward to. All these past months of your constant banging your head on the floor, like a toddler upset with his mom, has been wrenching.
mriana August 12, 2020, 6:21pm #13

@sree you living in Never-Never Land isn’t much better than his being upset about the current state of affairs in the U.S., which you call toddler behaviour. Why don’t you look at your dic[tator] chief if you wish to see worse than toddler behaviour? At least @timb , and others, have some hope that the Dems will win and things will get better again.

All these past months of your constant banging your head on the floor, like a toddler upset with his mom, has been wrenching.

lol Exactly! The mom should get the toddler to a doctor to find it out if something is wrong. Sadly, there is something wrong with this country and the cure is to get the dotard out of the WH.

Sadly, there is something wrong with this country and the cure is to get the dotard out of the WH.

What are the chances of an old frail priest and a lascivious nun driving Count Dracula out of the White House?
mriana August 12, 2020, 11:03pm #17

There’s no such thing as vampires. Get your head out of the movies @sree and face reality and ask questions that deal with reality.

The two speeches -- first Biden, then Harris -- served as introductions to the new Democratic ticket. But they also offered a preview

Mriana, how do you feel about Kamala Harris as VP choice?

{No not you sree, save it, you’re just a nasty little pooper. All you got is parroting FOX News.}

@citizenschallengev3 At first I was a little weary, but I’m warming up to her fast. Keep in mind, she was my third choice in the primaries- Bernie first, then Warren, and finally Harris. As I think about it, I think Kamala is a very good choice for Biden, because 1. she will tell him how it is and won’t pull punches 2. she’s not afraid to tell him he’s wrong about something and 3. she fulfills my requirement of not having two old Boomers (though she’s almost a Gen X’er and not a Boomer), in case the 70-something president croaks of a heart attack or stroke. I wanted this requirement for Bernie too. Kamala is basically my age- She’s 55 and I’m 54, so we are the same generation, despite a line that moves by a year depending on the chart you look at. She’s not really a Boomer, but no really an X’er, much like myself. That’s what we need right now, instead of Boomers controlling things. IMHO though, Boomers need to step aside, because they are too old to go with the changing times, wanting to stick with the old ways, not stepping aside for Millenials. We need a bridge and who better than the parents Millennials/children of Boomers? The transition needs to be made and the Boomers aren’t going to give up easily or until they drop dead. That said, there are some good Boomers, like Bernie and Biden, who are willing help in passing the torch and help the younger generation build the country they want. Kamala can help too and she’s perfect, especially in light of the Millenials just now coming of age (or almost there) for the Presidency.

I think it is a bonus that Kamala is the daughter of 1st generation immigrant parents (both scientists and civil rights activists), the father from Jamaica and mother from India. (She is a one woman diversity package.)

And I bet she has her California birth certificate handy, for when the Birthers start up.

Oh, I do think we will all need to learn the word “misogynoir”. Cause it will become quite prevalent in the coming days.