Face it Republicans have gone hysterical on us - case in point Gov. Abbott

This is the behavior of genuine sociopaths that care not one wit for anything beyond their own self-interests. And still it’s silent as a church around here, which makes me think that still most people don’t connect with what’s happening and certainly don’t want to discuss anything.

Republicans have truly turned into totalitarians. Their actions reveal that within their own minds, they are in an all out war with us. Us of the intellectual enlightenment persuasion, with our respect for evidence, fact based learning, science and constructive dialogue.

A long line of trucks is seeing stalled at the Zaragoza International Bridge, one of two ports of entry in Ciudad Juarez going into the U.S. on April 12, 2022. ((Omar Ornelas /The El Paso Times via AP)

Since Monday, Mexican truckers have blocked the Pharr-Reynosa International Bridge in protest after Gov. Greg Abbott directed state troopers to stop and inspect trucks coming into Texas. Unusually long backups — some lasting 12 hours or longer — have...

New safety inspections are part of Gov. Greg Abbott’s effort to crack down on border smuggling. But industry groups say it is stifling trade.

PHARR, Texas — Trucks attempting to enter Texas loaded with goods from Mexico sat motionless for hours on Tuesday as lengthy vehicle inspections ordered by Gov. Greg Abbott in a clash with the Biden administration over immigration snarled traffic at major commercial crossings.

In the city of Pharr, a major international bridge over which about $12 million in produce is shipped to the United States daily has been effectively shut down in both directions since Monday as scores of drivers in Mexico set up a blockade of their own in protest over the new inspections. A similar protest by truckers also blocked a bridge into El Paso.

Gov. Greg Abbott (R) wants state officials to inspect each truck, and drivers are now backed up for miles with trucks full of produce and other goods.

Gov. Greg Abbott has ordered state officials to inspect each truck. Drivers with fruits and auto parts are now backed up for miles.

… The new policy, announced last week, has led some truckers to remain snarled in traffic for more than 30 hours, prompting desperate pleas from fruit and vegetable importers, the auto industry and other executives who said their products are being caught up in a political standoff. …

… “Produce that was destined to United States consumers in some cases will have to be destroyed because of the perishability of our products,” said Robert Guenther, International Fresh Produce Association’s chief policy officer. “This will result in millions of lost economic production not only in Mexico but to the state of Texas and potentially other border states that are now experiencing similar delays.” …

The Mexican government had reached out to the State Department and Department of Homeland Security about the issue, and business executives on both sides of the border expressed exasperation at what they felt was a politically induced crisis with real economic implications.

'It’s going to affect all of us': Frustration grows as trucks block...

Protests over Gov. Greg Abbott's latest border security measure are slowing down the flow of trade on the U.S-Mexico border.

‘It’s going to affect all of us’: Frustration grows as trucks block Texas-Mexico border

Frustration is also spreading to members of Abbott’s own party: Texas Agriculture Commissioner Sid Miller, a Republican, called the inspections a “catastrophic policy” that is forcing some trucks to reroute hundreds of miles to Arizona.

An estimated 3,000 trucks would cross the Pharr border bridge on a normal day, according to the National Freight Transportation Chamber.

And these so-n-so, charge others with playing “politics” 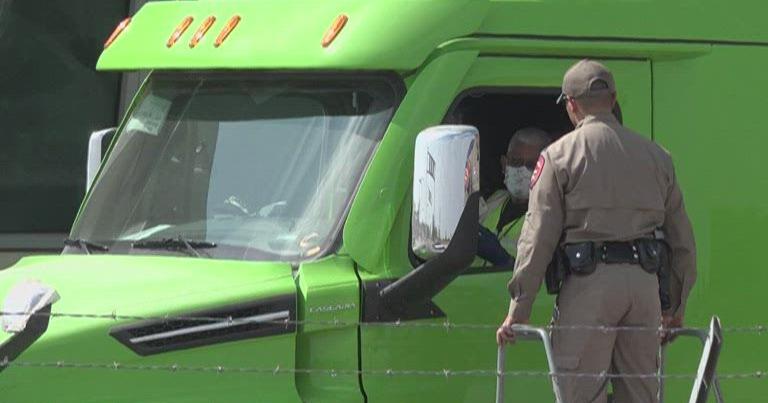 Protests over Texas Governor Greg Abbott's latest border security measure are slowing down the flow of trade on the U.S-Mexico border.

So where are the “I did this” stickers of Abbott pointing to piles of rotting vegetables and empty shelves?

So where are the “I did this” stickers of Abbott pointing to piles of rotting vegetables and empty shelves?

Ain’t that the truth.

The deals Abbott made with three of the four Mexican border governors don’t include any new security measures south of the border. Abbott threatened to restart the inspections if Mexican states don’t slow migration to Texas.

Rotting fruit, spoiled vegetables: How Texas just made the supply chain even...

Hey just another season in Texas, the promise of right wing politics: You’re on your own.

‘Look What You Did to Us’: The Big Chill of Texas Politics

After the devastating freeze, Texans in blue cities blame the state GOP leaders for leaving them in the cold.

Hysterical Republicans, Exhibit B:
Ron DeSantis and his fight with Disney.

On Wednesday, the Florida Senate voted 23 to 16 to eliminate the Reedy Creek Improvement District, dealing a major blow to Disney and by extension, taxpayers in Central Florida.

The district has about a billion dollars in outstanding bonds that need to be dealt with. That burden, as state lawmakers admitted, will fall on local taxpayers.

All because a Disney exec spoke out against the “Don’t Say Gay” law in Florida.

“If Reedy Creek goes away, the $105 million it collects to operate services goes away,” wrote Orange County Tax Collector Scott Randolph. “That doesn’t just transfer to Orange County because it’s an independent taxing district. However, Orange County then inherits all debt and obligations with no extra funds.”

Under state law, Orange County is not allowed to tax Disney extra unless it creates a new special district for Disney. However, to do this, the county would need the property owners inside of Disney (the company) to agree to take back the debt.

If the bond debt falls on Orange County, residents can expect to acquire between $2,200 to $2,800 in extra debt for a family of four.

Another childish lashing-out without thinking of the knock-on effects.

Another childish lashing-out without thinking of the knock-on effects.

That’s Dotard Repugs for you.