An insider psychologist's view of the t rump's psyche

A tell-all book by President Trump’s niece (Mary Trump, who is also a Clinical Psychologist) describes a family riven by a series of traumas, exacerbated by a daunting patriarch who “destroyed” Donald Trump by short-circuiting his “ability to develop and experience the entire spectrum of human emotion”...

Mary’s father, Fred Jr., — the president’s older brother — died of an alcohol-related illness when she was 16 years old in 1981. President Trump told The Washington Post last year that he and his father both pushed Fred Jr. to try to go into the family business, which Trump said he now regrets.

Donald escaped his father’s scorn and ridicule because “his personality served his father’s purpose. That’s what sociopaths do: they co-opt others and use them toward their own ends — ruthlessly and efficiently, with no tolerance for dissent or resistance.”

(Our t rump, Mary wrote) “is a product of his domineering father and (Donald) was acutely aware of avoiding the scorn that (his father, Fred Sr,) heaped on (Donald’s) older brother, called Freddy (Jr).”

“By limiting Donald’s access to his own feelings and rendering many of them unacceptable, Fred perverted his son’s perception of the world and damaged his ability to live in it.”

Mary Trump wrote that her grandfather’s children routinely lied to him but for different reasons. For her father (Fred, Jr), “lying was defensive — not simply a way to circumvent his father’s disapproval or to avoid punishment, as it was for the others, but a way to survive.”

For her uncle Donald, however, “lying was primarily a mode of self-aggrandizement meant to convince other people he was better than he actually was,” Trump writes.

“Fred [Sr.] hated it when his oldest son screwed up or failed to intuit what was required of him, but he hated it even more then, after being taken to task, Freddy [Fred Jr.] apologized. ‘Sorry, Dad,’” Mary wrote of the way her grandfather treated her father, known as Freddy. Fred Sr. “would mock him. Fred wanted his oldest son to be a ‘killer.’”

Donald, seven-and-a-half years younger than his brother, “had plenty of time to learn from watching Fred humiliate” his eldest son, Mary Trump wrote.

“The lesson he learned, at its simplest, was that it was wrong to be like Freddy: Fred didn’t respect his oldest son, so neither would Donald.”

So long story short, Freddy, Jr dreamed of becoming an airline pilot. He was cajoled by Fred Sr and his lil bro the t rump into abandoning that in order to go into the family real estate business. Freddy does and eventually drinks himself to death.

Anyway, sounds like LYING was a full time way of surviving and thriving in that family.

Oh, and we can see where the t rump learned to never ever “show weakness” by apologizing.

So long story short, Freddy, Jr dreamed of becoming an airline pilot. He was cajoled by Fred Sr and his lil bro the t rump into abandoning that in order to go into the family real estate business. Freddy does and eventually drinks himself to death.

Anyway, sounds like LYING was a full time way of surviving and thriving in that family.

Look at you. Feeling good watching someone washing dirty linen in public. You like the Jerry Springer Show much?
timb July 8, 2020, 10:42am #4

Look at you. Feeling good watching someone washing dirty linen in public. You like the Jerry Springer Show much?

Uck. No. I don't care for that genre at all.

It is nice to get the scoop on the t rump’s psyche from his family history. And to get more confirmation of the t rump’s characterological dysfunctions and how they developed.

Did you catch the part where the trump’s sister did his Wharton homework for him, and he paid a buddy to take the SAT’s for him?

He learned early on to pump himself up in stature, hyperbolically, and to NEVER apologize or admit a mistake. And he allied himself with his sociopathic father against his older brother. Did he and Fred Sr. unite in telling Fred Jr that he would be disinherited if he (Fred Jr) joined the military? The t rump, no doubt, took notice when Fred Sr mocked Fred Jr, whenever Fred Jr apologized for not meeting up to the Senior’s expectations.

In addition to helping drive his brother to an early death, the t rump gained approval from Fred Sr, by being the opposite of Fred Jr. The t rump developed bone spurs instead of going into the military. He actively wanted to be in the family business. He NEVER touched alcohol.

The dotard is a psychopath and many psychologists have said so. He meets the DSM criteria for the Dx and he probably has other possible psychological Dx’s too. He’s only getting away with his murderous ways only because he indirectly kills and is (albeit fake) president.

Did you catch the part where the trump’s sister did his Wharton homework for him, and he paid a buddy to take the SAT’s for him?

I have people polishing my boat, washing my cars, cutting my lawn. Like me, Trump probably needed his time to do more important things.
mriana July 8, 2020, 8:21pm #7

@sree you cannot have other people do your homework or take your SAT/ACT test. That’s called cheating. It’s not the same thing as lawn mowing or washing vehicles.

You can't impose your ethics on someone else who live by a different moral principle. Diversity. If you embrace it, then stop condemning those who don't think like you do.
mriana July 8, 2020, 11:41pm #9

@sree that’s not part of diversity. Cheating is still cheating no matter who is doing it or not doing it. Cheating has nothing to do with diversity and again, it just shows you don’t have a clue about it.

I have people polishing my boat, washing my cars, cutting my lawn. Like me, Trump probably needed his time to do more important things. --Sree

OMG, I saw the responses, but getting back to the Sree post that started them, that is precious. Since there is no final word on ethics, I'm not going to try to educate Sree on what "cheating" means. He's already shown that he can always fall back on the "who really knows" argument. But, if he's interested, which I know he's not, or anyone else is, which I'm pretty sure some are, philosophers are starting to build consensus around "Moral Realism". It takes some time to narrow it down, because with just a word or two change in the definition, it becomes hedonism. Enjoy.
dmfrensley July 28, 2020, 7:26pm #11

I just finished that book. Good book - My god I ALMOST found myself feeling sorry for him but then I got over it. I had a crappy childhood too but you don’t see me locking brown babies in cages and playng golf while the friggin’country implodes.

I just finished that book.

dmf, you don’t need to bother about anything that sree writes. He is a wannabe Ferengi.

Your reaction to the book seems on target, to me.

Whatever lead to the t rump being the dangerously disordered character that he is today, cannot be allowed as an excuse for what he is doing as an adult.

sree - Perhaps you should read the book I referenced and you will understand where I got the idea he had a crappy childhood. Money is one of the last things that you need to have a happy childhood. His family life created the monster that is now the leader of our country. I was going to say the leader of the free world but we lost the right to that designation.

timb - Absolutely agree with you, although I’m not sure you could really call him an adult. He is more like a large 6-year-old who won’t play if he can’t win. Wish he would take his toys and go home and left the grown-ups talk now.

sree – Perhaps you should read the book I referenced and you will understand where I got the idea he had a crappy childhood.

I won't read that book, Dana. Firstly, I don't like gossip; and secondly, if I were your friend, I would stay away from people who would bad-mouth you. Would you tell the world private things - especially, embarrassing stuff about your sister, mom or dad? It's all about breeding. We Americans seem to have none of that these days. You look like a nice person, like my aunt Gloria. She would never say a bad thing about me, nasty as I am, to anyone.
dmfrensley July 29, 2020, 10:58pm #17

Thank you. I am a nice lady. I read that book because it provided insight into what is wrong with the man that is on the brink of destroying our nation. I can’t walk up to Mr Trump and ask him so I read reputable information and judge for myself what I choose to believe. I also have eyes to see, ears to hear and a brain to interpret. This man is, I believe, the most dangerous man since Hitler. I urge you and everyone else that is serious and looks at the things he has done and said to remove him in November or sooner if possible. This is not a laughing matter. This man is a dangerous sociopath. I am an ordinary, intelligent, reasonable human being. I will assume the same about you. LISTEN. WATCH. THINK. vote him out while there are enough of us left to matter.

This man is, I believe, the most dangerous man since Hitler.

Why do you say that? Are you Jewish? I do believe that you are a nice lady and I want to know why you see Trump as bad for our country. The other folks here are too emotional and that is not a good trait for straight objective thinkers. Your career in banking tells me that you know what's what. So, what led you to see Trump as unfit for the presidency?
dmfrensley July 29, 2020, 11:39pm #19

No, I’m not Jewish. I am a human being. Here are a few of the reasons I believe he is unfit for the presidency, or any other position of power:

He is a liar and not even a good one.

He is not a smart man (Forest Gump was much smarter) - use bleach or disinfectant INTERNALLY to cure Covid? please

He is unqualified for the job. IHe has no experience, I doubt he has ever read the constitution (or any other book). I would not have hired him to be a janitor, let alone leader of the free world

He does not accept responsibility for anything that he does wrong

He is a sexist, a bigot, a racist, a misogynist

He put all of his dysfunctional family in positions of power

I could go on and on.

How about you tell me why you think he IS fit for the presidency? But do it tomorrow. I’m going to bed.

The t rump really does seem like a child often times. 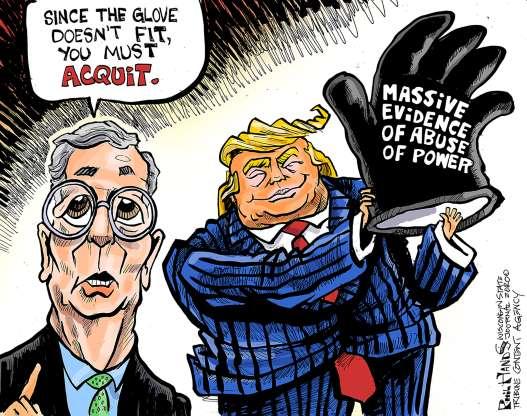 But legally, he is an adult, and I think should be held responsible for the laws that he breaks and for the harm that he causes. That, however is not going to happen while he holds office. If he remains in power another 4 years, he will become a full fledged dictator and our form of democratic republic will be functionally done for.