The so called “war on christmas” is something atheists like to make fun of because there really isn’t any war on christmas – it’s all about being more inclusive like this meme says: 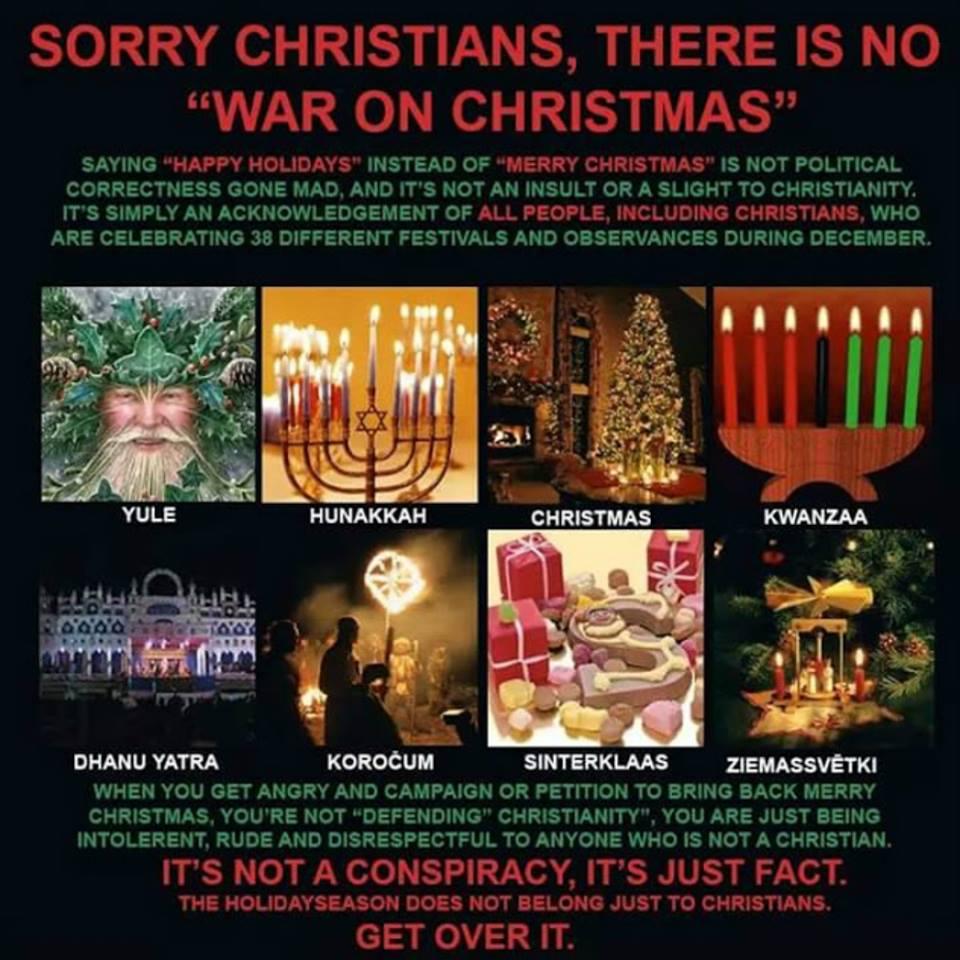 They might have a point if any of these “december celebrations” besides Christmas and Hanakkah were big holidays, but they aren’t. They’re not even little holidays. Most of them are fringe bullcrap only celebrated by antisocial weirdos.

Funny enough, I live in a liberal, diverse area – with many jews – and nobody ever gets angry if you say “merry christmas”. Nobody has any problem saying merry christmas back unless they can’t speak english.

It really seems to be an atheist thing. Most Atheists are antisocial weirdos like the people who celebrate Kwanzaa and they are in fact trying to sabotage the holiday.

There is no war on Xmas. I prefer celebrating Winter Solstice or Human Light Day, but fewer people celebrate those or at least they don’t realize they are actually celebrating a pagan holiday that deals with the winter solstice and not Christ at all.

They’re not even little holidays

they are in fact trying to sabotage the holiday.

I prefer celebrating Winter Solstice or Human Light Day, but fewer people celebrate those or at least they don’t realize they are actually celebrating a pagan holiday that deals with the winter solstice and not Christ at all.

Christmas is a mix of old European pagan beliefs and Abrahamic beliefs. Saying Christ isn’t a part of it is retarded.
mriana December 18, 2020, 10:33pm #6

@thatoneguy You totally misunderstand, but I don’t have time to write a book right now. I’d also be careful how you throw around words like “retarded”.

As my husband says, "There is that good Xian attitude we've all come to expect." IMHO, the majority (which is Xian) have successfully taken over the holidays and can't stand it when someone says, "Happy Holidays", being all inclusive, even adding New Years to the collection of holidays around this time. To them, the only important one and the only one everyone MUST celebrate is Christ's Mass (AKA Christmas). Sorry, not everyone celebrates it or even cares about it and are tired of all the crazy humans raiding stores to get that all important gift, trampling others. IF it's really about their Christ, why are they so greedy, especially around the holidays?
lausten December 18, 2020, 11:20pm #8

Saying Christ isn’t a part of it is retarded.

No, you're retarded. Sorry, couldn't resist.

The gospel writers had no concept of what is now the Christmas tradition. Nothing in the birth narrative was intended to become ritual.

Though certainly not for the same reasons, I, too, disagree with the notion of a “war on Christmas.” Such an idea has the same inane ring of the phrase I heard yesterday from a commentator on a radio channel dedicated to the Christian religion: “The atheist’s war on Christianity.”

To carelessly mislabel these matters as “war” makes a fatuous and uninformed mockery of actual warfare, in my experience.

“A conversational conflict of beliefs and ideologies in the course of mankind’s cultural progress” might be more accurate, IMHO.

I was going to find a video of this guy who has made a hobby of whipping up fake controversy. 5 years ago he did the red Starbucks cup thing. But, he went too far with anti-masking and freeing Kyle Rittenhouse. So, he’s off facebook. I don’t want to give him any more clicks on YouTube.

The gospel writers had no concept of what is now the Christmas tradition. Nothing in the birth narrative was intended to become ritual.

I'm no expert but I think the Christian spirit is supposed to be about helping the genuinely weak; not tolerating bitter, clownish nerds, which is what 9 out of 10 atheists are.
lausten December 21, 2020, 11:35pm #13

So what? The birth of Christ still is a huge part of holiday. -- oneguy

The Baptist, in colonial America, outlawed Christmas celebrations. Jehovah witnesses have some very well reasoned arguments for why they don't celebrate it. Santa generally does not appear in a Christmas pageant in a church. A simple children's story from the 1960's that is still wildly popular denigrates the commercialization of Christmas. There are a lot of things about Christmas that have nothing to do with Christ. Saying there is a war on Christmas makes about as much sense as saying there is a war on the Green Bay Packers.
lausten December 21, 2020, 11:40pm #14

This is exactly what atheists say all the time. If Christians were in fact doing this, there wouldn't be an organized group of atheists trying to keep religion out of science classes and Biblical laws out of secular government. Asking for the simple courtesy of recognizing that some people don't recognize their god is relatively low on the priority list.
mriana December 21, 2020, 11:48pm #15

The birth of Christ still is a huge part of holiday.

Actually, it's a celebration of the sun returning or "[re]birth of the sun from the southern hemisphere". It's just humans have anthropomorphized this act of nature. At one time, it was celebration of the sun, which was later turned into "the son". Humans first had animism and worshipped volcanos, the moon, the sun, even cats then they anthropomorphized things. It's just another winter solstice celebration. Nothing more. There is no actual man or rather baby called Christ underlying Xmas. It's all about sun worship.
ibelieveinlogic December 31, 2020, 7:55am #16

Xmas: The "X" comes from the Greek letter Chi, which is the first letter of the Greek word Christós (Greek: Χριστός), which became Christ in English. The suffix -mas is from the Latin-derived Old English word for Mass.

The term as spelled with an "X" is a common abbreviation, not something derogatory.

There is no actual man or rather baby called Christ underlying Xmas. It’s all about sun worship.

The term as spelled with an “X” is a common abbreviation, not something derogatory.

It is not “Bullfeathers” to say that there is NO actual person underlying Xmas. It is sun worship with many miraculous birth stories, not just the mythical baby Jesus story. The baby is symbolic of a “newborn”/reborn sun or returning sun during the winter solstice, after it went to the underworld (below the equator). This also relates to Easter, where the sun/son dies and returns/resurrects during the Spring Equinox. It’s a myth that there is an actual being behind the story of Xmas. There is not. It all about sun worship. Xianity evolved from pagan sun worship.

I doubt anyone can make a decent case for this claim. My understanding is the same as that found in Wiki: "the church in the early fourth century fixed the date as December 25." Also found there one author is quoted: "the cult of the Sun in pagan Rome ironically did not celebrate the winter solstice nor any of the other quarter-tense days ..."

I think one could make a better case that, as a prince of Egypt, a well-educated Moses would have been exposed to (and possibly adopted) the one-god position of Akhenaten and that evolved into the Abrahamic religions.

@ibelieveinlogic Most of that is what the Church wants people to believe, while the Church attempts to bury the truth. A lot of the truth was destroyed when the Library of Alexandria was burned. There was even a time when the Church didn’t want printing presses to print the Bible so everyone who can read and those learning to read can read it. They also had “forbidden books” like the Gospel of Thomas, that they did not want people to read. There was a great brouhaha over what books would be put in the Bible and once decided, all the rest were either unXian or forbidden to read. The Church even forced others to submit to Xianity or die, condemning the works of other religions. The list goes on and on how the Church buried the truth of Xianity and forced what they want people to believe on everyone. Even today, what is printed about Xianity is only what the Church wants people to know and believe about Xianity. It’s all a total brainwash, including what Wickedpedia has. Even if one corrects it to the truth, it gets changed and even what you see is sometimes changed by others due to discrepancies what the various sects want their members to believe. This goes for everything on Wickedpedia, which isn’t even allowed as a reference when a college student is writing a paper or dissertation. Professors won’t accept as one’s cited source, not even in religious courses, because it is not a reliable source.

The list goes on and on how the Church buried the truth of Xianity and forced what they want people to believe on everyone. Even today, what is printed about Xianity is only what the Church wants people to know and believe about Xianity. It’s all a total brainwash,

I more or less came to that conclusion while I was taking “Confirmation Classes” (Protestant equivalent to Catechism) back in middle school. From then on I treated the classes as flawed history lessons… with a little bit of “magic” thrown in