Instead of following up on the promised part II of a major Infrastructure agreement with the Dems, today, whiny baby Trump declared there would be no more legislation of any kind, until all of the investigations about him have stopped.

This is basically his, unilaterally, shutting down the congressional function of legislation as a hostage to try to force the House to abdicate it’s constitutional obligation of oversight.

Maybe the whiny little baby is so threatened, now, that his intensive cover-up actions will be exposed, that he has decided to take this, yet another, unprecedented, nation damaging action.

This baby is not a deal maker. He couldn’t finalize a deal to get out of his dirty diaper.

And he made up a little sign to pin on his podium while he explained this pre-planned temper tantrum, that said, “No Obstruction”.

Trump is a loser. He was often a loser in his own business. If not for daddy’s money, and probably a ship or 2 load of laundered Russian money he would not have come back from his financial losings. He is gradually going to bring us down. This latest baby drama will knock us down, if he sticks to it for a month or more, like he did with his batshite govt shutdown. He will have to back down again from his making America a hostage for his own purposes crap, eventually. And again he will be shown for the pathetic loser that he is. But that will pass in a news cycle, too, and the Trumpublican disaster will continue.

Lausten, I read that and thought, NO! You can’t be serious! About a millisecond later, no he didn’t, did he? Well actually I says to myself, okay self, would Lausten be pulling my leg and spreading Fake News? Better check it out myself.

Rebecca Ballhaus - Mueller BY THE NUMBERS 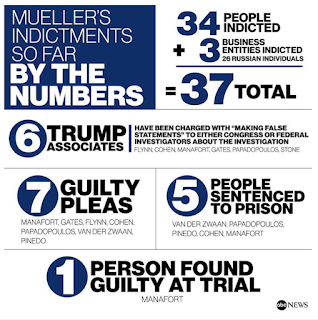 darth™ @darth_TRUMP BY THE NUMBERS 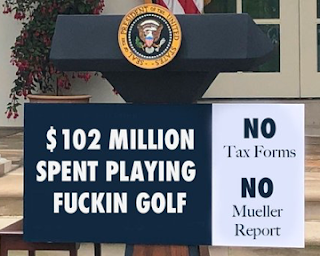 I would add that the figure of $35M spent on the Mueller report is another one of Trump’s oft repeated lies. It was less than that, and with the millions seized from Manafort, some say the costs may have broken even.