This is a great analysis of recent decades. Hope to hear more about it 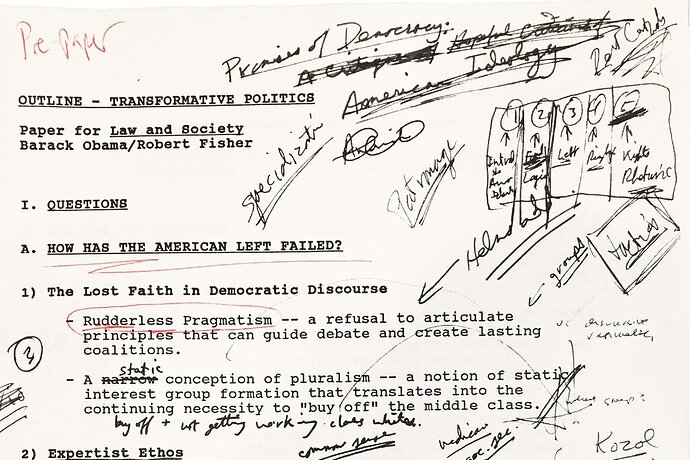 At Harvard Law, he wrote a blistering manifesto he never published. Its searing advice could help Democrats escape their current political quagmire.

This is a great analysis of recent decades. Hope to hear more about it

… That’s a shame, because reading “Transformative Politics” today is a bracing experience.

Speaking with a candor he would soon be unable to afford, Mr. Obama directed his fire across the entire political spectrum. He denounced a broken status quo in which cynical Republicans outmaneuvered feckless Democrats in a racialized culture war, leaving most Americans trapped in a system that gave them no real control over their lives.

Although his sympathies were clearly with the left, Mr. Obama chided liberals for making do with a “rudderless pragmatism,” and he flayed activists — with the civil rights establishment as his chief example — for asking the judiciary to hand out victories they couldn’t win at the polls. Progressives talked a good game about democracy, but they didn’t really seem to believe in it. 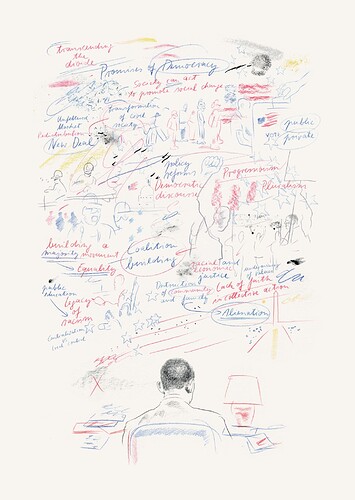 Makes me wonder why his Organizing for America (OFA) was such a bland washed out white bread affair?

So the big question is where do we go from here?

Makes me wonder why his Organizing for America (OFA) was such a bland washed out white bread affair?

Because he was trying to build a coalition of working people. Confirming racism would lose half of them. Economics drive votes, but you have to make it understandable.

Well that’s the Democratic story in a nutshell, isn’t it?
Too scared to do anything of substance.
Too insecure to stand up to bonafide liars.
With a society too drunk on Hollywood Dreaming to care about any of it.
And billionaires who feel deprived and obsessing about conniving even more riches and power out of the system.

Sorry, once in a while it feels like something is actually happening, only to see it all seem to evaporate, while Republicans are doing nothing but doubling down on MAGA-delusionalism and supercharging their hatred and bizarre sense of entitlement.

Well that’s the Democratic story in a nutshell, isn’t it?

Yup, and at least it’s good to know that Obama recognized that. Maybe it will infect some more.

The most generous analysis would be Obama’s youthful idealism was replaced by realistic careerism. Nothing was really stopping him from trying to kickstart those changes, but he just didn’t do it.

History will show that Obama’s presidency was business as usual.

Yeah Guy, that one’s easy to agree to.

Nothing was really stopping him

With Barack Obama’s presidency slipping into the not-so-recent past, it’s hard to remember the thrill — or dread — he once inspired.

I said it when I campaigned for him and I’ll say it now: He had and has charisma and he knows how to use it.

History will show that Obama’s presidency was business as usual.

Yeah Guy, that one’s easy to agree to.

I don’t agree. While he had charisma, no one got my attention, like he did, since Mondale/Ferraro. I didn’t campaign for them, because I was still living at home and my relatives are Repugs. I still voted for them though and have voted Dem ever since. Yet, he caught my attention, we got health care, though it was not what Obama originally wanted. The Repugs broke his plan, so it never was what he originally wanted once in office. So I guess it was business as usual, with Repugs voting against, removing parts of what Dems originally wanted, or breaking it in order to make it what they want or sort of what they want, leaving very little of what was originally wanted by a Dem. Maybe I am wrong and it was business as usual… for Repugs.

“I really hope to be part of a transformation of this country,” he told Allison Pugh of The Associated Press, who came away struck by his “oddly self-conscious sense of destiny.”

Repugs and white supremists made sure it wasn’t a transformation.

Written with Robert Fisher, a friend and former economics professor, the 250-page manuscript had the working title of “Transformative Politics.”

To understand what Mr. Obama was trying to accomplish with “Transformative Politics”, and why it matters today, you have to start with the problem he was trying to solve.

That’s what many people don’t understand.

Mr. Obama and Mr. Fisher didn’t pretend that racism had been expunged from American life. “Precisely because America is a racist society,” they wrote, “we cannot realistically expect white America to make special concessions towards blacks over the long haul.”

And we are feeling the backlash, from racist Repugs and other racists, today.

When Mr. Obama scolded pundits for slicing America into red states and blue states, it wasn’t a dopey celebration of national harmony. It was a strategic attempt to drain the venom out of the culture wars, allowing Democrats to win back working-class voters who had been polarized into the G.O.P. And it elected him president, twice.

He tried at least.

Today we are living in the world the Obama coalition has made.

I don’t think we are. I disagree with this author on this point.

the Obama coalition has remained a pipsqueak by historical standards. Under Franklin Roosevelt, the average Democratic margin of victory was 14.9 percentage points. Since 2008, it’s been 4.4 percentage points.

Exactly. This isn’t President Obama’s envisioned view of the U.S. The Repugs fought his view tooth and nail the whole time he was in office. It’s not the world his coalition has made and besides that, a U.S. president can’t make a world or planetary change.

In the Obama era, divided government has been the norm. And no, that’s not just because of gerrymandering. House Republicans won the national popular vote three times in the past 12 years — 2010, 2014 and 2016 — and there’s a good chance they’ll do it again this November.

It is due to gerrymandering. If you looked at the gerrymandered states, you’d find there is no way Dems could win the national vote.

So long as elections keep being decided by wafer-thin margins, the odds of a divergence between the popular vote and the Electoral College will stay high, voters in small rural states will continue to hold the balance of power in the Senate, and Republican election deniers will get new grist for conspiracy theorizing. Even if Democrats manage to take office, they won’t have the numbers to push through reforms that might break this electoral stalemate.

Which is what I’ve saying- the Repugs have control. They had control before, during, and after President Obama was president. He couldn’t do anything he wanted to do because the Repugs would either fight it or make changes, so that it was no longer his.

It’s chastening to reflect that the fate of American democracy turns on whether we can pass a test that the most talented politician of his generation failed. But that’s no excuse for giving up today.

My sons and I haven’t given up, but the stuff people blame on President Obama, just because he was president at the time, wasn’t his doing. The same goes with President Biden too. The Repugs have control and things that happened then and now are mostly their doing.

Are you saying that because people voted for President Obama, it translated into self-destruction? Please explain.

He tried at least.

Better than others, sure, sadly that’s not saying much,
and obviously more was needed, or so many on both sides wouldn’t be so hideously under-informed.

Perhaps Lausten was hinting at 60 million that were too lazy to vote?

Are you saying that because people voted for President Obama,

No. I’m talking about the Republican base. They vote on issues like gun control, abortion, and immigration. What they call progress in those issues is harming them, plus they are losing social support, education and regulations that would save their children’s lives.

I’m talking about the Republican base.

That I agree with.

What they call progress in those issues is harming them, plus they are losing social support, education and regulations that would save their children’s lives.

That’s just it. You can’t give him 100% blame for what happened during his tenure. It’s the House and the Senate who deserves most of the blame during that time and he even chastised them for their behaviours, which the article mentioned, more than once.

I worked on his campaign too, but I didn’t find him disappointing. What I found disappointing was the Repugs who refused to work with him because he is 1/2 Black and a Dem. President Obama was never like Clarence Thomas.

I voted for Obama, had high hopes. Then he tried to play nice with the Repubs. Big mistake. The thing they do right, unfortunately for the wrong reasons, is they fight hard, and fight dirty. And they know their audience. Go forward to 2016, when Clinton used the phrase “basket of deplorables”, god I almost voted for Dump. She personified everything people, including liberals like me, hate about so many liberals like her and Obama to some extent. They come off as elitist intellectuals who look down on “the rabble”. Dump OTOH, with all his flaws, knows his target audience.

Dump OTOH, with all his flaws, knows his target audience.

The dotard may know his target audience, but he’s a criminal, who should spend the rest of his life in prison. I did vote for Hillary, because she was and is far better than the dotard.

Nothing was really stopping him

How were they stopping them? Way more people voted for him than not and he made no attempt to campaign on the issues he wrote about in law school.

Face it White liberals – Obama was an empty suit who got elected simply because he was Black.

How were they stopping them?

You’ve seen the people who can get into congress, right? They don’t get there on merit. They come from districts that were created for them and campaign money that buys their votes. The winner of the Presidency doesn’t get to do whatever they want, not in a functioning democracy. Republican leadership has figured out how to win with a minority of votes, and they won’t stop trying to increase in power and decrease the power of the people.

Face it White liberals – Obama was an empty suit who got elected simply because he was Black.

No, not because he is 1/2 Black and the suit was hardly empty. Keep in mind, he was also 1/2 white, because his mama was white. We cannot ignore that or we should not ignore that. That said, it was the Repugs blocking everything he proposed and if they didn’t block, they changed the things he proposed until they weren’t really his anymore, but left his name on it.