The world is going crazy. Putin, Trump, Me First, Too Much Is Never Enough.
Don’t look now big boys, but your cities and agriculture infrastructure are being destroyed by something even bigger than your Big D Games. But do billionaire care.

Then one thing leads to another, today in 2022 instead of dealing with the changing realities of our life support system and the cascading consequence of global warming, radical intensification of weather patterns, droughts, storm, temperatures. An arena where honesty and cooperation and shared vision are absolutely essential, but instead we have been driven back to 1939.

The insanity is too much. MAGA 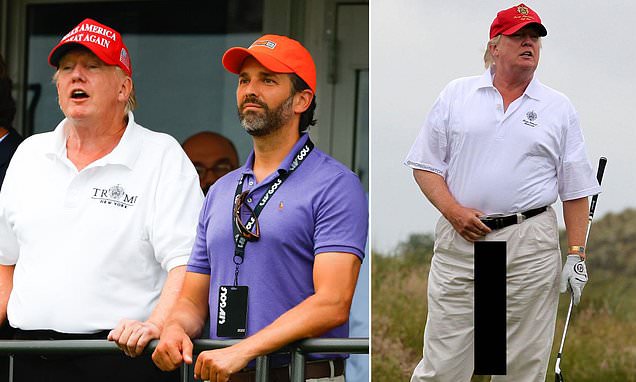 Trump Jr., 44, responded to the news by posting a photo of his father golfing with a black bar to censor the former president's crotch area.

I really came to expected better from that Putin guy, especially after stories my Kekistan/Russian landlady shared. Then came trump to fill him with dreams of power and domination like he never imagined possible.
Now puffed up Putin has his bubble burst, and is taking down his nation with him.

We, Russian activists, military and politicians, now partisans and fighters of the National Republican Army, outlaw warmongers, robbers and oppressors of the peoples of Russia!

We declare President Putin a usurper of power and a war criminal who amended the Constitution, unleashed a fratricidal war between the Slavic peoples and sent Russian soldiers to certain and senseless death.

Poverty and coffins for some, palaces for others – the essence of his policy.

We believe that disenfranchised people have the right to rebel against tyrants.

Putin will be deposed and destroyed by us!

Our goal is to stop the destruction of Russia and its neighbors, to stop the activities of a handful of Kremlin businessmen who have sucked on the wealth of our people and are committing crimes today inside and outside the country.

We declare officials of the Government of the Russian Federation and regional administrations to be accomplices of the usurper – those who do not resign their powers will be destroyed by us.

We announce businessmen who earn their money on corruption and connections with officials – traitors to the Motherland and accomplices of the usurper. The property of those who do not repent and do not speak publicly against this government and its war, and they themselves will be destroyed by us.

We declare employees of power structures as accomplices of the usurper. Those who do not lay down their arms and take off their shoulder straps will be destroyed by us.

We declare military cargoes and the cargoes of those who earn money in the war and help it financially – legal targets that we will destroy.
We remember the bombings of houses in Russia that brought Putin to power. We know that the regime will not stop at any of the most heinous crimes. And we declare: we carry out actions only against persons of this power. We will not attack civilian objects and civilians, and if Putin’s security forces will make such provocations and attribute the victims to us, do not believe them!

We call on the soldiers of the Russian army to stop shooting at our brothers from other countries – Georgia, Syria and others.

We call on all Russians to join our ranks and raise the white-blue-white flag of the new Russia instead of the tricolor disgraced by Putin’s government.

We call on those who are ready to fight to follow our example and overthrow this inhuman, hypocritical and anti-people regime!

We consider it unacceptable that Russians have begun to be defamed all over the world because of war crimes committed by those who have neither nationality nor fatherland, and who love only money and power.

We will give protection to all who follow our call.

All those who carry out our program up to the change of regime are exempt from liability under the laws of the usurper.

After our victory, we will immediately release all those illegally convicted by the Putin authorities.

We will give freedom to all the peoples inhabiting Russia and build a new society – a society without oligarchs, without corruption, without arbitrary officials, without humiliating poverty.

A society in which everyone is rewarded according to their work. Society without wars and violence.

A society in which power will belong to the people, where citizens will choose their own leaders and organize the life of their cities and villages themselves.

A society in which the rulers will not be able to sacrifice human lives for their own greatness, but will think about education, medicine and scientific progress.

A society in which everyone will be proud that he was born on the territory of Russia and will want to live in it!

Wherever you are – fight like us, fight with us, fight better than us!

Let’s cleanse our Motherland from filth! Victory will be ours! 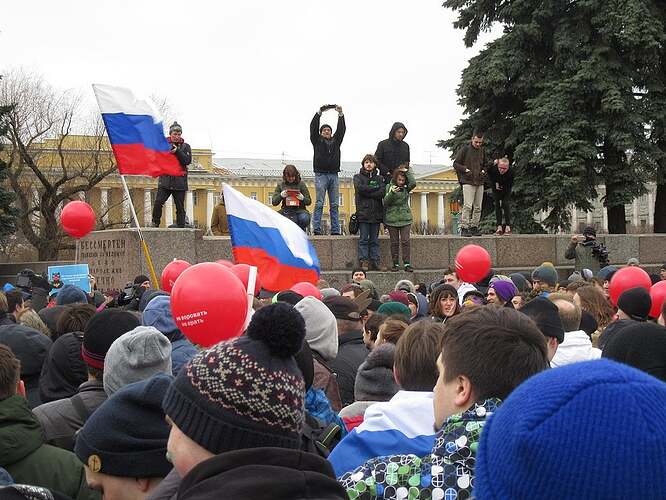 On Saturday, August 20, agents from the anti-Putin National Republican Army planted an explosive device in the car of Darya Dugina, the daughter of a Of the 445 members of the Russian Duma (Parliament), Ilya Ponomarev was the only one to vote against the annexation… - Aug. 23, 2022. By Jason Jay Smart

I thought I read somewhere that the Manifesto was written more than a year ago or so, which is why it doesn’t explicitly mention Ukraine in it’s “Killing our brothers …” statement.

Is this from the Communist Party of the Russian Federation (KPRF)??? Wonderful!! 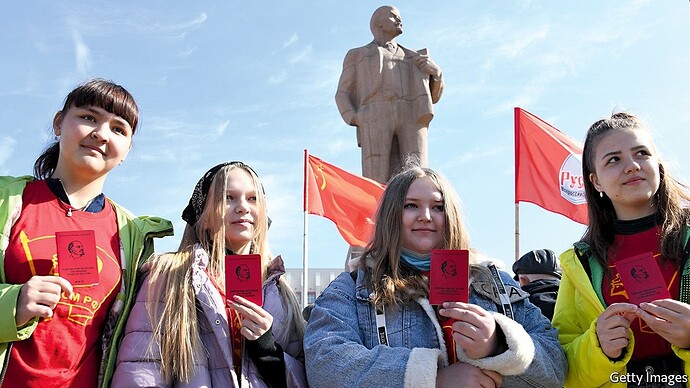 The Kremlin and the party’s own leader are worried

Could be trolling. There’s no evidence the group even exists.

Could be trolling. There’s no evidence the group even exists.

Yeah, I saw those caveats in the WIKI run down.
Something is going on. 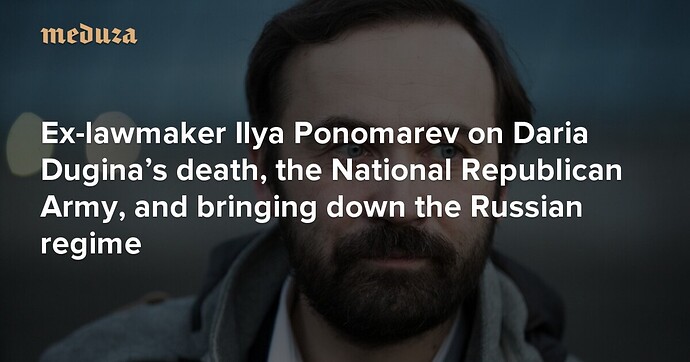 ‘Our task is to finish off Putin’ Ex-lawmaker Ilya Ponomarev on Daria...

I don’t pretend to know the heads or tails of it, we shall see.

But it stands to reason a lot of people within Russia are as disgusted at their tyrant as we are of our trumpkin.

I don’t know if it’s part of the alleged NRA, but there are protestors of Putin, such as Pussy Riot. I think some if not all of Pussy Riot are currently in prison for protesting him, which is what he does with all those who protest him and/or what he does.

This is a four year old article about them: Who are Pussy Riot? A guide to the Russian activist group who crashed the World Cup Final

However, NPR recently interviewed them, so I guess all of them are out of prison: 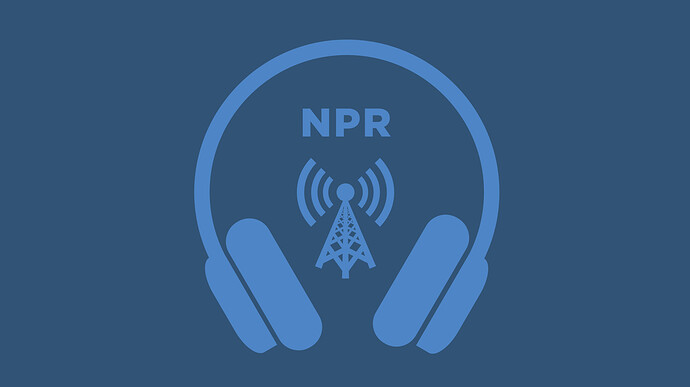 From the sounds of it, I’ll bet a bunch of opposition groups are starting to pop up.

Take care, the strongest opposition to Putin is backed up by ultra nationalists who reproaches him his " weakness " and promotes harsher measures !!!

Bolshevism is back and growing in Russia to counter the right wing Russian government!!!

Bolshevism is back and growing in Russia to counter the right wing Russian government!!!

What? Were you expecting Russia to homegrown a system with some built-in sanity? Catch up on your Orwell. 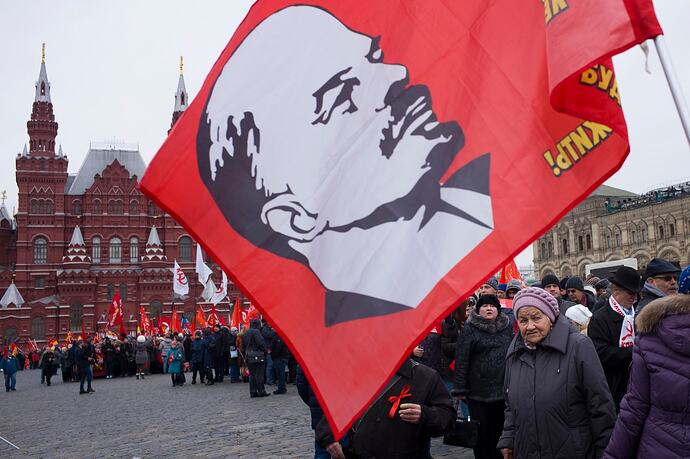 Opinion | 100 years later, Bolshevism is back. And we should be worried.

The neo-Bolsheviks among us offer a false and misleading vision of the past.

Quick put putin back in charge. Anyone but the Bolsheviks !!! Run for the hills😂