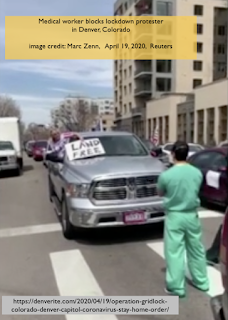 A medical workers stands in the road in front of a car carrying a woman protesting Colorado’s stay-at-home order. Video credit: Marc Zenn

… Earlier this week, hundreds of demonstrators blocked the streets of Lansing, Michigan, and defied an executive order from Democratic Gov. Gretchen Whitmer to shelter in place to combat the spread of the coronavirus.

The protest, known as “Operation Gridlock,” featured a fair share of MAGA hats, Trump flags, at least one Confederate flag, chants of “Lock her up!” in reference to Whitmer, and far-right groups from the Proud Boys to the Michigan Liberty Militia. They clogged up the streets outside the state Capitol and defied Whitmer’s ban on public gatherings.

The whole charade was facilitated by the Michigan Conservative Coalition, a conservative political group that doubles as a front for Michigan Trump Republicans, and promoted by the Michigan Freedom Fund, a conservative group with ties to Education Secretary Betsy DeVos, a Michigan billionaire philanthropist power broker before she joined the Trump administration. The Detroit Free Press reported that the fund was listed as one of the protest’s hosts on Facebook. The organization also promoted the event on Facebook. …

… In a series of odd tweets, President Donald Trump called for the liberation of states controlled by Democratic governors in what my colleague Inae Oh described as the “latest signal that social distancing has fully warped into a culture war, one that depicts Democrats as oppressors willing to sabotage the economy and perhaps, in turn, the president’s reelection chances.”

The “Operation Gridlock” event hosted by the Michigan Conservative Coalition in Lansing on Thursday drew thousands of people to the state capital Lansing to protest the state’s strict stay-at-home quarantine order.

‘Stay Home’ Opposition Also Brewing OnlineCritics of government efforts to slow the spread of coronavirus are starting to find each other on social media. A Facebook group titled ‘ReOpen Colorado’ that launched on Monday already has more than 13,000 members. And a conservative group, Colorado Freedom Force, has so far gathered around 2,500 signatures calling on the governor to lift restrictions on businesses and gatherings.

Colorado Freedom Force part of the brainwashing campaigns of willful ignorance and the stupefying of Americans. …

Nationally, Americans’ fears of the virus appear to mostly outweigh their concerns about closures. A recent Pew survey found two thirds of respondents are more worried that governments will lift restrictions on public activity too soon, instead of keeping them in place too long. That data did uncover partisan differences though; while Democrats fall overwhelmingly on the side of government not reopening things too soon, Republicans are more evenly split in their views. …

… “Operation Gridlock would be a wholly irresponsible and reckless way to express those frustrations,” Martinez said in a statement. “We must remind everyone that it is illegal to willfully block a public right-of-way.” …

Protests against stay home orders have occured in states with both Democratic and Republican governors, but the movement has taken on a partisan tone. In Michigan, where the most high-profile demonstration took place, Trump flags and banners were on prominent display.

The Colorado Republican Party is not involved in the weekend protests. But at least one GOP lawmaker may attend. Rep. Mark Baisley of Roxborough Park …

All who are in the fight for Truth are my heroes.

I noticed your info showed that the demonstrations that T rump has been praising are organized and promoted by a campaign group.

I don’t think that I am engaging in much hyperbole at all, in my continuing attempts to identify to others that EVERTHING that T rump says and most of what he does is primarily aimed at his 2020 Campaign.

He is just about the most polarizing person in his position that has ever been a POTUS. And in the midst of an intense national crisis, when invisible invaders are spread throughout every part of the USA, while they are killing thousands of Americans each day, when we most need to be a United country, we are, INSTEAD, MORE divided than since our Civil War.

Rather than being a HEALER as T rump claimed to be, he is a POLARIZER, and a DIVIDER.

not to mention narcissistic, uneducated imbecile.

He’s never done anything but campaign and propagandize for the past 3 1/2 years - it is all he’s capable of.

He’s never done anything but campaign and propagandize for the past 3 1/2 years – it is all he’s capable of.

STAND THEIR GROUND doesnt make any sense. It’s not like the protesters were attempting to take over the hospital.

I also find it odd that “heath care workers” would walk outside during their shifts and engage in a protest while their patients are left there wondering wtf happened. That’s a good way to get fired in most hospital systems.

I am surprised at your lack of ability to put yourself in the place of those health care workers. Really I don’t see how you can avoid the empathy.

They were delivering a message of opposition to the protestors. Who has a better right than they, to do so?

I also find it odd that “heath care workers” would walk outside during their shifts and engage in a protest while their patients are left there wondering wtf happened. That’s a good way to get fired in most hospital systems.

Well these are odd times, if you hadn't noticed. And they are not going to get fired at the height of a Pandemic, now are they?
citizenschallengev3 April 21, 2020, 2:20am #7

People do come off shift.

the protesters are nothing but malicious puppets, for a money making operation Look like a bunch of fascists, more than anything American - Oh I forgot we are the land of Indian genocide, and proud of it many are.

Ugly times ahead children with such unhinged juvenile delinquents carrying such fire power.

With the intellectual depth of a comic book page, that’s the worst of it.

But lets not say nothing about the insanity of disregarding physical reality.

It’s not like the protesters were attempting to take over the hospital.

I believe they were getting in the way of ambulances. Not a protest I would recommend. Doesn't really speak well for whatever you're trying to say.

I believe they were getting in the way of ambulances. Not a protest I would recommend. Doesn’t really speak well for whatever you’re trying to say.

Hospital security exists to deal with things like protesters. All health care providers are trained not to engage in potentially threatening situations because

I know this because I used to be one. That’s why I’m skeptical.

If the healthcare worker was coming off duty, he does not need to be Mr. Spock at that moment. He is entitled as are we all to express his personal dissent. Yet he, I would say, is more entitled than the rest of us, as he has risked his own life and the lives of anyone he maintains contact with (loved ones). Even our soldiers aren’t risking their own families lives. Also that healthcare worker has probably watched an inordinate amount of deaths, that he was desperately trying to prevent, occur over and over and over in an inordinately small period of time.

I would applaud him, if he not only stood in front of the protestors car, but if he also took his dick out and pissed on the hood.

Hospital security exists to deal with things like protesters.

So you're pivoting to an obscure code of conduct? I guess that means you are giving up on the "not taking over the hospital" thing.
thatoneguy April 21, 2020, 10:53pm #14

If the healthcare worker was coming off duty, he does not need to be Mr. Spock at that moment. He is entitled as are we all to express his personal dissent.

Once again -- speaking as a former Paramedic I doubt any HCP would get off shift and fan the flames of a situation that could potentially disrupt the work of his colleagues still on duty. If a HCP was stupid enough to do that their career would probably be ruined -- and for good reason.
thatoneguy April 21, 2020, 10:55pm #15

So you’re pivoting to an obscure code of conduct? I guess that means you are giving up on the “not taking over the hospital” thing.

guy in the facepaint: "It’s always cringeworthy when you try to be clever."

Do you get a cut from the Dorr Bro’s Scams? Is that why you’re on the side of unhinged?

. . . There were three big stories during the day. The first was the lockdown protests around the country, which appear to have been orchestrated by Trump supporters to mobilize key right-wing groups. Their goal is not to defend the president, but to make it look like Democrats are unpopular—a key distinction showing just how weak a hand Trump’s campaign thinks he currently holds.

We knew the Michigan protests were organized by groups largely funded by Secretary of Education Betsy DeVos’s family, and that the activist groups FreedomWorks was behind others. Today we learned that five of the largest Facebook groups protesting restrictions were set up by Chris, Ben, Aaron, and Matthew Dorr, four brothers whose pro-gun and anti-abortion Facebook groups bring in hundreds of thousands of dollars a year. The brothers not only solicit donations and memberships in their enterprises, but also harvest emails and user data. Minnesota’s Senate Republican Caucus called them “scammers.” Ben Dorr says claims that his work is a scam is “fake news” and that he will continue doing what he does.

Despite being pushed by personalities on the Fox News Channel, and despite the president’s encouragement, the protests have not been well attended. . . .

Once again — speaking as a former Paramedic I doubt any HCP would get off shift and fan the flames of a situation that could potentially disrupt the work of his colleagues still on duty. If a HCP was stupid enough to do that their career would probably be ruined — and for good reason.

I think that in this Pandemic, a HCP might very properly and justifiably do what the guy pictured above was doing.

I think he probably did not at all disrupt any colleagues on duty INSIDE the hospital.

And I think his career is not going to be ruined at all.

He may even find himself better off professionally when all this is over with.

He will likely get free drinks from colleagues in better days in the future, when he tells the story of pissing on a protestor’s car, back in the great pandemic.

I know this because I used to be one. That’s why I’m skeptical.

They are antifa in scrubs. If they are not on the job tending to Covid patients in ICU, they are not healthcare workers.
citizenschallengev3 April 23, 2020, 9:35am #20

Such and hateful simpleton you are.

One Russian Obligate President and 97% of Russian brainwashed obligate traitors in the USA believe we should do all we can to spread the virus as much as possible.

It ain’t no big deal cull the masses, the demand.

How COVID-19 kills and maims.

But when you got no heart or brains, what’s it matter, eh sree???

How does coronavirus kill? Clinicians trace a ferocious rampage through the body, from brain to toes By Meredith Wadman, Jennifer Couzin-Frankel, Jocelyn Kaiser, Catherine Matacic Apr. 17, 2020 ,