For starters since when does the President offer storm updates?

Then we get another example of how utterly disconnected the guy is from physical reality.

By Eugene Robinson - September 5 at 5:00 PM
This doesn’t qualify as earth-shattering news at this point, but President Trump showed us again this week how spectacularly ignorant, vainglorious and obsessive he can be. This time, he did it with a clumsily doctored map.

Yes, I’m talking about the out-of-date National Hurricane Center map of Hurricane Dorian’s projected path that Trump displayed Wednesday — a map that someone who clearly knows nothing about weather forecasting or rudimentary logic had crudely altered with a black Sharpie (Trump’s preferred writing implement) to protect the president’s massive yet eggshell-fragile ego.

The heartbreaking story about Dorian is the catastrophic damage the storm inflicted on the northernmost islands of the Bahamas, where entire communities were destroyed and there still is no full accounting of how many lives were lost. The ongoing story is the threat of flooding in the Carolinas as the storm plows its way northward. The contextual story is the growing scientific consensus that climate change has made such tropical cyclones fiercer, wetter, slower-moving and thus more punishing than in the past.

But leave it to Trump to make himself the subject of a bizarre and disgraceful footnote. I pity the satirists and comedians who try to make fun of him, because he does such a good job of it himself. … 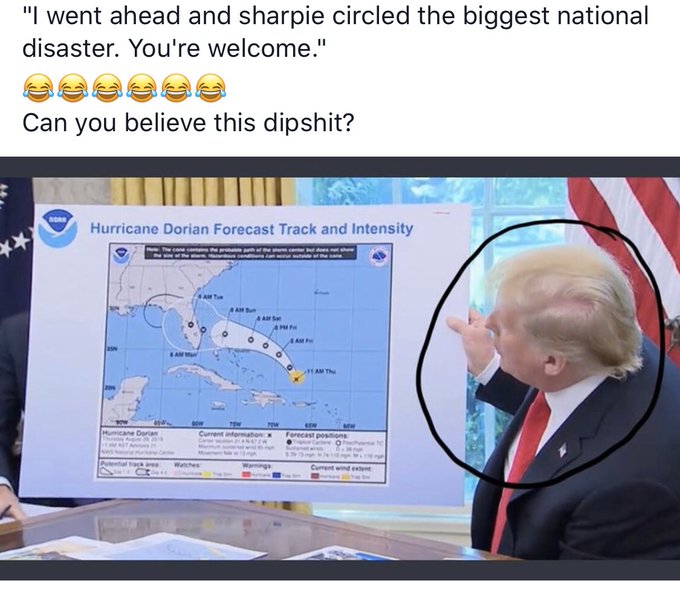 Perhaps even more bizarre and threaten, his disregard for national security secrets:

Many experts told news agencies that they were concerned that the declassified photo could reveal unknown information about U.S. drone or satellite surveillance.

Apparently, they were right. Amateur satellite trackers have reverse-engineered the image and figured out that it likely came from the highly classified USA 224 satellite. USA 224 is suspected to be a KH-11 surveillance satellite, a classified piece of equipment about which the public knows little. …

He’s a stable jenius, like a developmentally delayed jackass that lives in a stable.

So he cancelled an overseas trip, to stay here and monitor Dorian. But when he 1st made his claim that Alabama was in the path of the storm, it was based on a days old projection, at best. When he made the claim, the forecast path of Dorian was up the eastern coast of the US.

So, at best, he was doing a terrible job of monitoring Dorian. Alternatively, I think he might have simply confabulated the statement about Alabama. People with organically degrading brain function sometimes confabulate, i.e., they just make things up to account for holes in their memory. For Trump, his personality seems to be such that he would follow up a confabulation with an obsessive defense of it (because it is not tolerable, to him, for him to be viewed as being in error).

Nah, the dotard got out his sharpie because he wanted to draw and show his drawing skills, which is nothing more than scribbles. lol

Here is a sharpie modified pic that needs a caption: 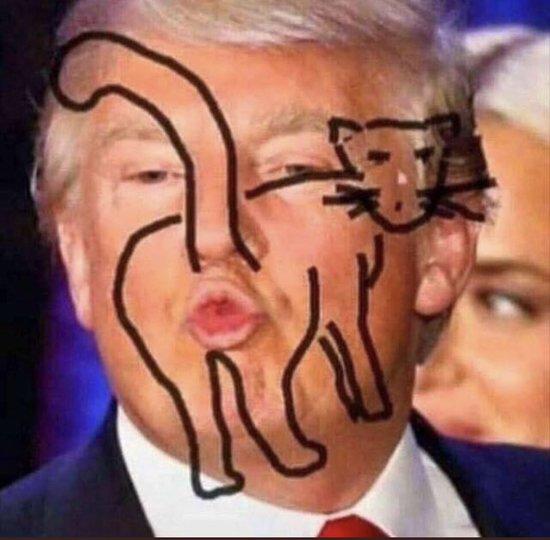 Hey! Get him away from my pussy [cat]!

Besides, I agree with you, nothing funny about having a US president who so totally lives within his own narcissistic alternate reality.

He’s still not grabbing any of my cats. He touches one of them and they have my permission to scratch his eyes out. lol Picture all 4 of them in a Taz attack on him. lol We can always make an alternative reality of own in order to cope until election day. It helps me to imagine my cats attacking him if he attempts to grab them.

Secret Service agents would have trouble trying to wrestle 4 cats, at once, to the ground.

@TimB Exactly. lol And the dotard would deserve every minute of the cats’ claws.