This was a new one on me, and if any of the SI editors are reading this, I hope you might consider doing an article on this. It’s called “Polyvagal Theory” (with a practitioner side called “polyvagal coaching”), and it sounds to me like chakra-tuning with a little real physiology thrown in. Check it out at The Dark Side of Polyvagal Theory

It sounds like the “theory” part was developed by a qualified psychiatrist and neuroscientist with solid credentials, but went off the rails when it started being applied by so-called “coaches”. I see that the theory dates back to the mid 1990s, but was surprised to see that neither CTI/SI or my other “go-to” (RationalWiki) had ever covered it. Is anyone else out there familiar with the subject? Any chance of seeing an article on it sometime soon?

Any chance of seeing an article on it sometime soon?

@CC, doing a cursory check on this new terminology, I ran across this article and it looked like it is up your alley. 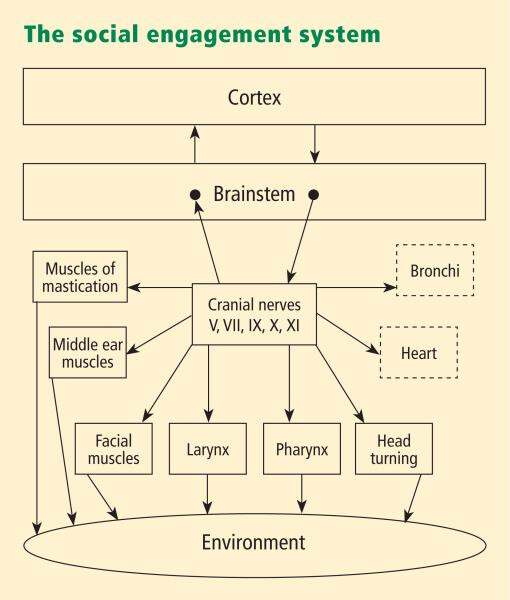 The polyvagal theory: New insights into adaptive reactions of the autonomic...

The polyvagal theory describes an autonomic nervous system that is influenced by the central nervous system, sensitive to afferent influences, characterized by an adaptive reactivity dependent on the phylogeny of the neural circuits, and interactive...

p.s. I am more inclined to associate this with the mirror neural network within the greater microtubule network of the body and brain.

Thanks for the reply, and the link to the article. Its author (S. Porges) is the one I refer to in my original post as the qualified and credentialed developer of the theory, and I think the theory is more or less sound (at least from my non-neuro-scientist point of view). The “out there” part is what some people are doing with it. While there appear to be some qualified neuro-psych types practitioners using it as a valid tool, there are others calling themselves “polyvagal coaches”, some of whom appear to be treating it as kind of a fix-all body-mind tuning approach (akin to “chakra” tuning). I’ll continue to dig into it for better examples, but the whole area (esp. the “coaching”) bears scrutiny.

I’ll continue to dig into it for better examples, but the whole area (esp. the “coaching”) bears scrutiny.

I mentioned the Mirror Neural network,

but before you read that I suggest learning the meaning of Empathy and how that affects your connection with other minds.

Empathy is the ability to recognize, understand, and share the thoughts and feelings of another person, animal, or fictional character. Developing empathy is crucial for establishing relationships and behaving compassionately. It involves...

IMO, this ability is a fundamental ability to “relate” to other minds and emotional states.

@CC, doing a cursory check on this new terminology, I ran across this article and it looked like it is up your alley.

This thread popped up and previously I didn’t have any time to deal with it. I’ve read that article now, sounds interesting:

… The theory is dependent on accumulated knowledge describing the phylogenetic transitions in the vertebrate autonomic nervous system.
Its specific focus is on the phylogenetic shift between reptiles and mammals that resulted in specific changes to the vagal pathways regulating the heart.
As the source nuclei of the primary vagal efferent pathways regulating the heart shifted from the dorsal motor nucleus of the vagus in reptiles to the nucleus ambiguus in mammals, a face–heart connection evolved with emergent properties of a social engagement system that would enable social interactions to regulate visceral state.

The polyvagal theory 7,11–15 articulates how each of three phylogenetic stages in the development of the vertebrate autonomic nervous system is associated with a distinct autonomic subsystem that is retained and expressed in mammals.

The polyvagal theory proposes that the evolution of the mammalian autonomic nervous system provides the neurophysiological substrates for adaptive behavioral strategies. It further proposes that physiological state limits the range of behavior and psychological experience. The theory links the evolution of the autonomic nervous system to affective experience, emotional expression, facial gestures, vocal communication, and contingent social behavior. In this way, the theory provides a plausible explanation for the reported covariation between atypical autonomic regulation (eg, reduced vagal and increased sympathetic influences to the heart) and psychiatric and behavioral disorders that involve difficulties in regulating appropriate social, emotional, and communication behaviors. …

On the face of it looks interesting, even substantive, but when I looked it up, besides being pretty much exclusively Stephen Porges posts or videos, followed by a couple alternative medicine practitioners, this thing has already jumped from explanation and evidence gathering to, for profit treatment. Sort of a red flag. Then to finished this little avoidance of other choirs exercise I checked out the WIKI.

Polyvagal theory (poly- "many" + vagal "wandering") is a collection of unproven, evolutionary, neuroscientific, and psychological constructs pertaining to the role of the vagus nerve in emotion regulation, social connection and fear response, introduced in 1994 by Stephen Porges. It is popular among some clinical practitioners and patients, but is not endorsed by current social neuroscience. Polyvagal theory takes its name from the vagus, a cranial nerve that forms the primary component of th...

It helped clarify stuff that the paper and other articles & a couple YouTube lectures left fuzzy, so I feel I have a better sense of what it’s about.

But then we get to the bottom and the “Inconsistencies and lack of evidence” section, which is rather illuminating, … and deflating.

Check it out at The Dark Side of Polyvagal Theory
by Brian Dunning - Jan 25, 2022 - skeptoid.com

… You can already sense a little bit of the controversy to follow. PVT came from a completely legitimate and respected distinguished Professor of Psychiatry with solid neurological credentials, yet he made some proposals in physiology that are not widely accepted, and in some cases outright rejected.
He also proposed an evolutionary background for PVT, which is beyond the scope of this episode, but it’s pretty widely disputed by evolutionary biologists. He also paved the way for PVT to be used in psychotherapy, with many in the field embracing it, and many in the field dismissing it as pseudoscience.
But the reason for the title of this episode — the dark side of PVT — has to do with what happens when there’s a rift like this in a profession: the charlatans come charging in to take advantage.

These charlatans come in the form of — as they call themselves — polyvagal coaches. What these coaches sell is something that should be of grave concern to the psychological profession — and by extension, to everyone. …

Porges’ original idea with PVT was to help victims of trauma; to propose a framework for therapists to help people get out of the mobilized state and learn to live in the safe state. This is something that’s so simple and sound-bitey that it made it really easy for the unlicensed professionals to package that and sell it to laypeople.

Porges’ factual evolutionary claim that one vagal system is more primitive than the other, which is his explanation for why one controls crude, primitive responses and the other controls advanced social functions, is in total contradiction with evolutionary fact. This type of criticism goes on at length.