Over at my blog I’ve got this thing lit up like a Christmas Tree with hotlinks that go to various sources of relevant information. Truth be told, I bit off too much and couldn’t fit it into 1000 words - well actually I did and submitted it, then stuck it away for over a week, before going back to reread. It wasn’t pretty and when the issue arrived it wasn’t in there. Only second time in over ten years* that my submission was rejected. Can’t blame her, in fact, after my reread it saved me some embarrassment. I have fixed it up to where I like it now, but it took 146 words to get there. I’ve got a week to decide if I can reduce this to 1000, but not sure I’ve got it in me. Too much stuff crowding me these days.

All in all I’m looking at these past months that it took to arrive at these two essays as a good, if humbling, effort, but a job unfinished. Time to put it away, do some mud wrestling then come back for another shot at telling this story next time.

Oh if anyone has any thoughts regarding where I might cut 150 words, meaning probably a complete paragraph or thereabouts please do share.

Have you ever heard the writing advice: You gotta kill your babies.

but you gave me the inspiration, gonna copy and paste this and figure out which paragraph or two needs to go.

Although Tim, you know, you never did said anything about whether it made any sense to you, or if it flowed?

I put it in google docs, I’ll get access setup in a bit.

Have you thought about more of a pattern, naming the eras and times, and putting a series of adjectives and verbs with each one. Not quite a poem, but along those lines. Full sentences as needed, but they aren’t what gives the piece it’s flow.

I just saw that, great timing since I’d already psyched myself up for working on it today, now you turned it into a genuine project.

And talk about killing my babies, you zoomed right in on one didn’t you - I’ve two thirds left to read carefully but from skimming, I see there’s much to consider and work on.

I genuinely appreciate it. Does that make me a masochist, or just serious about writing?

jostle (oops) Too many joists in my memory.

Have you thought about more of a pattern, naming the eras and times, and putting a series of adjectives and verbs with each one.

(sp) is a copy edit code for spelling error

Silly me, guess I should have remembered that. Sometimes. Although if you knew the three ring circus I’m subjected to, it might make more sense. Now instead of the morning for this, suddenly I need to run off to deal with unexpected issues at the X’s house 50 miles away. Like my aunt rosanna anna danna used to say, if it ain’t one thing, it’s another.

Dang Lausten, reworked it. Got more consistence with mentioning dates and times. Cleaned up a number of sentences. It sounds better for sure, has a bit of that elusive cadence - and then I get to the end and smack 1044 wrd.

Frustrating since I had it down to 970, then hanging below 1000 - let down the guard for a moment, cadence and rhythm and thinking I nailed it, then boom. Instead of a dozen words to finesse out, it’s 4 dozen. Rewrite, rewrite, rewrite.

Lausten, thank you. That’s what I’ve been talking about, serious shit that makes me think and work it out. Now this is finally feeling complete and clean. Gonna let it sit while I get some work done and then reread a time or two and send it in. I really appreciate you taking the time to do that.

I’m posting it over here inviting some more critique.

In the first part of this look at Earth’s 4.6 billion year old pageant of Evolution, scaled down to 24 hours, Earth’s first enduring Life took 4 hours to claw together an existence within very tiny, very simple, very protective sacks, against an extremely hostile environment.

After that, Evolution progressed very slowly. Why? Because Earth’s hostile environment provided limited means for development. Which brings us to a key early scientific breakthrough in perspective, namely that an organism cannot be understood without also understanding the environment it lives within.

That is why it took another 17 hours worth of Earth’s geology and biology combining forces to process and tame Earth’s raw materials to the point that descendants of those simple cells had the means to do more. Developing environments with changing conditions (ocean, atmosphere, chemistry, nutrients, climatic conditions, tectonics) these are what enabled spectacular innovations and expansion.

In a poetic sense Earth’s geology taught biology by providing building blocks and forcing it to adapt to changing conditions. Life continually repurposed its genetic heritage, body parts were re-proportioned, modifications made, animals radiated, and survivors learned to thrive in their brave new environments.

The increasing interaction of plants, animals, predators, prey, sensing, grasping, protecting, hiding, thinking – the stuff of competition, all of it working together giving birth to ecology and the outlines of today’s world during the Cambrian.

Since about 9:00 PM, or 500 million years ago, Earth’s Evolution has simply been variations on those themes as Life danced to climate, plate tectonics and celestial influences.

Around 9:30 PM, or 443 million years ago, the third period of Earth’s Paleozoic Era begins with 14 minutes of the Ordovician Period and growing continents around the southern hemisphere. Jostling each other caused erratic sea level rise and increased continental erosion that dumped into the seas. When continents converged around the South Pole another killer ice age was initiated.

The 9 minute Silurian Period brought in another resurgence of Life and diversifying species as those continents drifted north through temperate climate zones.

The Devonian Period, at about 9:50 PM, lasted nearly 18 minutes with continents aligning along the equator, then slowly coalescing into another supercontinent we call Pangea. Tougher environments and climate served to force Life to evolve new solutions, such as seeds.

By 10:07 PM with dust settling the warming Carboniferous Period became a big deal because the air contained 35% oxygen. Life on land soaked it in, insects became giants, plants became lush forests and genetic tinkering landed upon the egg.

The lush 18 minute long Carboniferous came in with glaciers, went out with droughts and deserts, causing another collapse at 10:27 PM. When conditions improved a slimmed down Permian Period biota rebounded for 15 minutes.

Then at 10:26 PM, a volcanic event like none other occurred. Under Siberia a hot lava plume encountered a subducting oceanic plate with all of its carbon rich rock, organics, and sea water. The hot plume melted into sills, creating immense vapor pressure, before continuing to the surface and an unimaginably powerful and dirty explosion.

After which the Siberian Traps continued erupting in ‘normal’ fashion for the next million years. Over 90% of ocean Life and two-thirds of land animals disappeared. So ended the Paleozoic Era at 10:41PM or 252 Million Years ago.

The Mesozoic Era begins with 16 minutes of the Triassic Period. Again the few survivors didn’t miss a beat. Among the most noteworthy adaptations were tetrapods who differentiated into distinct amphibians, reptiles, dinosaurs, mammal-like reptiles and bird lineages. Plants also reached new heights and complexity, while insects scaled down and prospered, as did ocean Life.

Pangea was now breaking up and again causing intensified volcanic activity, decimating the Triassic Period biota. Survivors include dinosaurs who quickly radiated and dominated the following 17 minutes of the Jurassic and 25 minutes of the Cretaceous Periods. Mammal-like critters kept it small, though diversifying just the same. Flowers and fruit appeared, reptiles and amphibians also prospered.

Then a well aimed mountain sized space rock crashed into the Yucatan Peninsula, releasing truly catastrophic cascading consequences 65 million years ago. Thus ended the hour long Mesozoic Era with three-quarters of animals and all non-avian dinosaurs dead, along with forests and jungles burned to a crisp. This was a mere 20 minutes ago.

Those forests and jungles, the atmosphere and oceans, eventually recovered and created new environments and conditions that enabled new groups of survivors to inherit the bounty and figure out how to exploit every possible niche.

Again Life’s evolving genetic toolkit enabled fantastical adaptations and diversification into the modern forests and grasslands that spread into previously uninhabitable harsh barren lands. Once mammals figured out how to exploit these new resources they filled every imaginable environmental niche on our Earth.

Among mammals were primates, with one branch leading to the first hominids 2 minutes ago. Through them modern humans appeared all of 6 seconds ago.

In the past milliseconds we humans have learned to reflect upon this universe and ourselves. We have become masters of science and manipulating the physical world.

We know much, but understand next to nothing, as demonstrated by our wanton destruction of the biosphere we depend on for everything.

Humanity’s gluttonous instincts are inflicting reckless damages upon our planet and her biosphere like never before. We have been injecting ever more insulating CO2 into our atmosphere and carbonic-acid into our oceans - unlike anything since the triggers to the Permian/Triassic super extinction event.

What else is left to say? Not much, except perhaps to point out there will be consequences for our society’s flippant disregard of our Mother Earth, her life history, and her needs.

Nice work. Even though I’ve heard the timeline analogy before, but when the humans finally arrive in this “pageant” you really get the sense of how were are just part of a long line.

Thanks. I read through it another dozen times. Kept picking off little things here and there, but it’s a wrap now and sent off.

I removed most the “then” - I’ve gotten into the habit of using them to keep the sentences moving forward, guess I need to watch that.

You’ll notice the two I left in were at the two worst catastrophes so figure that’s warranted - Then,…

It’s good to have stuff like that pointed out, least gives one a chance to think it over, and helps on justify or kill the baby.

When it finally works out, it feels satisfying.

TimB, thank’s for the good cheer from the balcony section

Thank for the feed back: 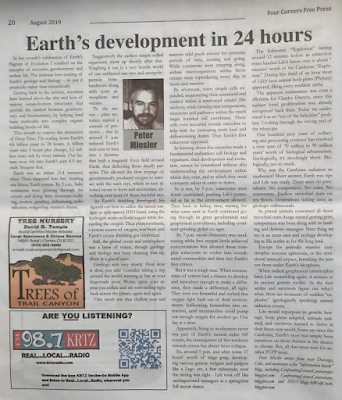 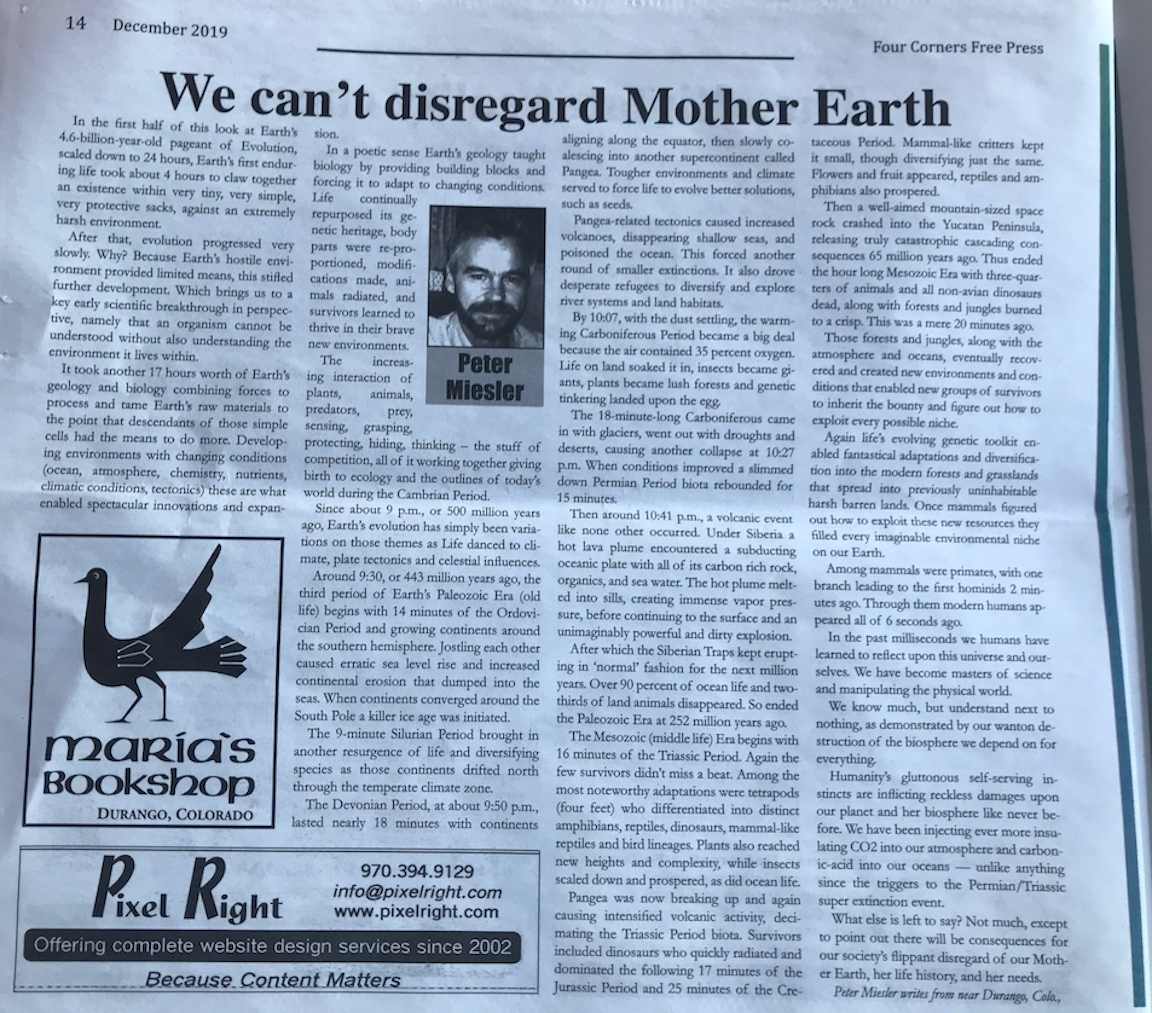 Should this topic interest you I’ve embedded over 160 substantive links to supporting information into the text of part two.

Thanks again for the feed back, it made the difference between a flop and something I can feel good about, while knowing I could do better in the future.

(oh don’t let the picture fool you, in true column fashion its a couple decades old by now

On a related thought:

One thing that I think of, when I considered that only the last 6 seconds total of ours and our hominid ancestors have been present in the fauna of Earth, is, Wow! how many other 6 second periods out of the 24 hours, involved previous species who thrived and became the apex intelligent species in the world, and then disappeared in other 6 second periods earlier in that 24 hour period?