On another thread Write4U shared a fun NOVA video about mathematic and nature. If you pull it up on YouTube, you’ll find all sorts of other videos on that same topic, a few that go much deeper into the same subject.

Considering it came on the heals of a vociferous ID proponent. Ironically the “IntelligentDesign” fan, never could explain what his ID actually was, or what it offered our understanding, though he could toss irrelevant Scripture at us.

In any event, it occurred to me watching the program about nature and mathematics that perhaps in fact mathematics itself is this mysterious Intelligent Designed that folks are clamoring about.

Since at least Aquinas, and really earlier, Abrahamic religious leaders have included themselves in the search for origins. They managed to balance this with their theology, the theology that explained their origin in a few sentences, by saying they were searching for “how” God did it, that they were exploring the world that God created. Other leaders saw the problem and tried to shut it down.

The problem is, the methods begin with the principle of following the evidence where it leads you. If you start using reason and evidence to discover God, you might end up discovering something else. The compromise in the 14th century was to allow Catholic schools to teach science but stay away from questions that the Bible already answered, and science wouldn’t be needed to help determine when a miracle has occurred.

Science went on to discover forces never conceived of in any scripture or Papal revelation or shamanic meditation. Magnetism was found to be related to electricity and then to time itself, and time isn’t what we thought it was. More importantly, this language we used to communicate these ideas cut across every cultural boundary. It didn’t matter what your mother prayed over you as child, if you studied hard enough, you could understand the forces of nature and take steps to answering the most intractable mysteries.

We still face the same problem of ages, that we don’t know the ultimate answer, we don’t even know if we will able to get any further in our knowledge than this one universe inhabit. We know what didn’t find. We didn’t find God above the clouds or anywhere out there, yet. We didn’t find a signature or a message telling us we reached the end of our search. The only “signature” is the information that points to quantum mechanics and evolution. ID has tried to twist that into evidence of a designer.

Tell me what the test is for God, if you did stumble upon God how would you know?

That’s the question we’ve been asking you since you got here. I didn’t make the claim, so I don’t have a test. I can only test what others claim. Gods used to be on mountains, then above the clouds. Where should I look?

You said you know about evolution. You know exactly what I’m talking about.

and where did that information come from?

If you know about evolution, then you know the answer to that.

who created the information or what process can you show me that generates information?

Why would you introduce a “who”? And I’ve answered about the process: quantum field, bubble, physical universe, matter, stars, elements, etc. And, even though I've covered this 100 times, it's just a theory, I don't really know anything for sure.
3point14rat September 3, 2019, 12:33pm #4

"That’s all very high brow but actually rather shallow."

Continuous comments like that destroy any possibility of good will or reasoned discussion. Can you please not include so many snipes and jabs in your posts.

I totally sympathize with wanting to add fun little personal comments, but seeing incessant and unnecessary personal comments get old after a while. If I can exercise the self control required to not do it, anyone can!

In any event, it occurred to me watching the program about nature and mathematics that perhaps in fact mathematics itself is this mysterious Intelligent Designed that folks are clamoring about.

What appears as Intelligent Design is not a “intentional” intelligent design, the universe works in a quasi-intelligent (self-ordering) mathematical manner.

quasi, adjective (Entry 1 of 2) 1: having some resemblance usually by possession of certain attributes ; a quasi corporation 2: having a legal status only by operation or construction of law and without reference to intent ; a quasi contract

This definition struck me as relative to the question of “intent”

2: having a legal status only by operation or construction of law and "without reference to intent" ; a quasi contract

This mathematical process is already observable in the interaction of chemicals, which use chemical values as the operants in chemical reactions. This process is wholly natural and voluntary and does not require the interference by a separate intentional "designer".

The patterns design themselves and are responsible for the emergence of bio-chemical compounds which were instrumental in the eventual self-assembly and formation of “living organisms” (patterns).

This excellent lecture describes the evolution of bio-chemical compounds and how it was possible for “life” to emerge from the ever more comp[lex patterns and communication abilities.

I have posted this before but here is an extended version of Bonnie Bassler explaining how and why non-brained organisms are able to “talk” to each other (in two languages no less) and perform cooperative tasks. 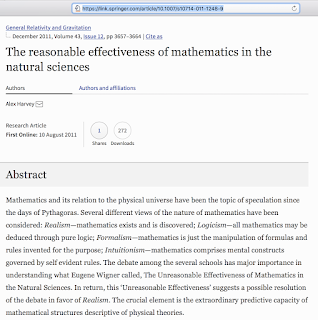 The reasonable effectiveness of math

Cite as “The reasonable effectiveness of mathematics in the natural sciences”

W4U, Thanks for the viewing tips, I’ve listened to Bassler in another talk, smart lady.

Short and useful video on the unreasonable effectiveness of mathematics.

It gets more relevant to this thread from the midpoint on.

I’m am a firm believer in the proposition that the universe and it’s functional properties, derived from universal geometrics, is fundamentally mathematical in nature.

First, this would suggest not an intelligent, but a “logical universe” (which may resemble a quasi-intelligent function).

Second, this would answer the fundamental question of an orderly resolution to emergent abstract mathematical questions of “Necessity and Sufficiency”

Necessity and sufficiency
From Wikipedia, the free encyclopedia
This article is about the formal terminology in logic. For causal meanings of the terms, see Causality.

Causality (also referred to as causation,[1] or cause and effect) is efficacy, by which one process or state, a cause, contributes to the production of another process or state, an effect,[2] where the cause is partly responsible for the effect, and the effect is partly dependent on the cause. In general, a process has many causes,[3] which are also said to be causal factors for it, and all lie in its past. An effect can in turn be a cause of, or causal factor for, many other effects, which all lie in its future. Some writers have held that causality is metaphysically prior to notions of time and space. https://en.wikipedia.org/wiki/Causality

If Determinism is true then Causality must be able to yield consistent and orderly results, and physical cause and effect becomes a mathematical function. (which humans have been able to symbolize with the invention of a universally applicable mathematical language.)

Thus; Mathematics: the language of the Universe.

W4U, Thanks for the viewing tips, I’ve listened to Bassler in another talk, smart lady.

UW, I hope the mods see it the same way…

Yes, and to discover the mathematical efficiency of processing chemical “words”, immediately suggests that there are universal languages which do not rely on sentience at all, but only on the compatibility of their mathematical patterns.

Write4U: "I’m am a firm believer in the proposition that the universe and it’s functional properties, derived from universal geometrics, is fundamentally mathematical in nature."

22:29 of this video (The Limits of Understanding) talks about that.

I have YouTube at work for some reason, so I’m taking full advantage over lunch.