How the time flies,

I’ve had a couple very entertaining days with Little B and Nana, me being Napa.

Parents have been traveling, and I can’t hide a bit of pride that he hasn’t fussed about them not being around at all. A couple FaceTime calls, and it was no biggie, he’s at home with us and we’re, well, we’re Nana & Napa, ‘nough side.

You know a couple years back he was tiny bundle of miracles and potential, just getting his bearings, a little spirit learning how to inhabit its body, and a body that’s trying to figure out how to master itself. Eye’s taking in everything, body fidgeting and growing and connecting with itself and then the world around it, right in front of your eyes. I mean I was blessed with watching his body spend months learning the prerequisites to crawling, and how that evolved into walking. So very cool.

And the innocence, the dependence, that tiny flawless body folding into ya, trust and love and dependence, and the caregiving. The being nurturer and witness to life unfolding and blossoming.

Here we are two years later and I had occasion to laugh at the contrast between then and now. {But first some background, B’s Dad, my son-in-law was a single child of a single mother. They got a long well, and from earliest he was neat, later he added punctual to the neat and clean. Never scared of housework, nowadays he’s winding up doing the most of it, because it matters the most to him. Nothing neurotic, just all-American clean guy, as opposed to a chaotic tramp (as in vagabond) sorta spirit like me.

Back to now. My task was to hang with the 2 year old, have fun, be safe. Toys galore. Wife and I make a good tag team, so no worries.

Little B’s not into talking. He’s not slow, sharp as a whip, laughs every time we try coaxing a word out of him. It’s a big joke to him ( truth be known, no one’s worried about it either, we’re enjoying the silence, before the storm of questions and commands inundate us.). Incidentally, or not, he’s learned a little sign language at his day care {Excuse me, it’s not “that” any more, it’s “School”}, okay so he comes home knowing basic sign language, ‘thank you’, ‘come,’ ‘go’, ‘that way’, ‘you’, ‘not you her’, ‘I want you’, ‘all gone’ – the family joke, now he doesn’t need to learn to talk at all, because he sure knows how to communicate already.

And he does. So, you think we were spending the day playing with his toys?

Not even, except for a few short lived diversions. We spent the day vacuuming and cleaning, with Little B being one hell of a task master. He’s got his plan, even if it changes a lot. Some of it was done with his cleaning toys, but most with the real thing. He’d step in to show us how it’s done, then step back and expect us to finish the area while he supervised. With two dogs, it wasn’t a wasted exercise, amazing how much one can suck out of rugs. He’d let you know if the work wasn’t up to snuff, and didn’t mind pointing out a missed spot. And the way he’d direct us around, was a precious hoot, I’ll cherish forever. No temper tantrums, a couple close calls, one in particular that I feel good about defusing – it was special moment, like he reconnected some earlier memory flash and sense of trust, and he gave himself into relaxing into a smile, and a fun moment flying through the room. To land in a new place with a fresh attitude.

Hope you don’t mind me sharing, just wanted to see if I could write down a memory,

and at least I’ll be able to revisit it sometimes, though if anyone else has their stories, you could share.

Speaking of flies, one of my best memories of this trip (we drove home yesterday) happened when I grabbed the fly swatters, and I handed little B one of then, since I do a chore, he want to participate. They have a kitchen island counter/sink arrangement, I started circling it, partly crouched, like all good hunters on the prowl do, I smacked one and another, then making a turn I glanced back to little B, and it was like in the cartoons. He’s in the exact crouched stance I am, stepping ever so gingerly. I know, I know, big deal, it’s what kids do they, monkey see - monkey do, and all that. But when it’s a little fella, that’s already stolen your heart, it’s just the coolest in the world and it’ll leave a memory trace to my final days. It really was like a scene out of a comedy.

Speaking of copy catting. This trip was a sad one, couple days of day care while parents flew back east, but most the trip was spent helping pack. They are moving to back east to chase a good job. Ouch, but it’s the way of the world. I figure I deserve to feel the pain, considering what a goes around, comes around thing. My mom only met her granddaughters a few times, and missed them dearly. Now it’ll be my turn.

But all that melancholy stuff is just a build up to this.

This happened towards the end of a long day of packing, and the house starting to attain that naked look, while the little guy’s playing around in the background. Then late afternoon, totally unbidded, he starts packing a bunch of his toys, no encouragement, or interaction, from us. Then he’s done loading up that box and pushes it across a couple rooms to park it in front of the front door. Then for the coup de grâce, he gets his vacuum and squeezes it onto the box. Can’t leave home without it. 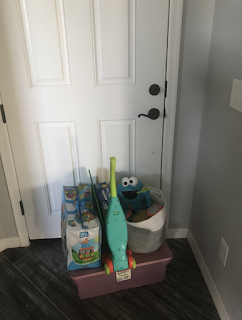 It’s beautiful, funny and a bit of a tear jerker most every time I look at it.

On the bright side, Maddy dog is happy we are home and has been keeping a close eye on me everywhere I go.

Not a cloud in the sky. All of that is coming from the Pinnacle Ridge fire to south and east, I’m guessing roughly 50ish miles away.

We were leaving on a day that promised temperatures around 115°. Truth be told I wouldn’t have minded staying for it, the previous highest temp I’ve experienced with a good walk around the block is 108° a couple years back. I am curious to see what 115° feels like. Of course, in the secure knowledge that I’ll be returning to my home at around 7,500’ elevation. Then I wonder about the people who can’t escape it, and the one’s who are forced to work in it. Heck I’m surprised I haven’t heard of massive computer problems considering the way mine heats up every time I use it outside.

Then I think about monsters like Steven ‘he’s a real, if dishonest, scientist’ Koonin, Liar for Hire - and his latest round of climate science deception - and my blood boils. The hell on Earth we are creating is a horror beyond imagining, which is why so so many do their best to ignore and deny it altogether. Unfortunately, that’s the attitude that’s going to guarantee worst case scenarios, rather than exercising rational options to turn down our GHG atmospheric insulation production. 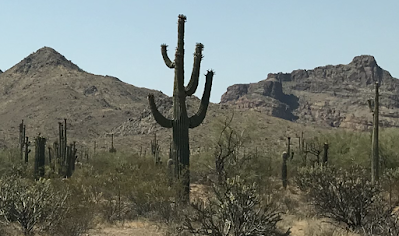 Re: Climate Change - I agree we need to change our ways. But we also need to be preparing for the inevitable. I think I read that they are trying to include $$ for those kinds of projects in the Infrastructure bill.

But we also need to be preparing for the inevitable.

Buddy, that's what people like me have been trying get across since the seventies. ?✌️

Ever hear the story pilots tell about the runway? “The runway behind you doesn’t do you any good.”

I’ve been witness to hell slowly rearing its head, as all the watersheds that feed the Colorado River are drying up. I’ve watched these mountains north of here from 1986 to '92. Worked for a few ranchers who made me aware of the snow pack, in them thar mtns, with the practiced eye of three generations. Why? Because the irrigation that kept them alive, and gave me some of my work, depended on it, and the better they could guess the flow, the better they could prepare, and repair the ditches, the better shape their fields were in. So I learned the landmarks, basically a couple mountain slopes that “held their” water. As in irrigation district.

Now I’ve been back here for the past ten years. Winters are sad, an anemic affair, snow lines that used to hold well into summer, are gone by April, May. There were couple good years in there, still not measuring up. The afternoon clouds build like they always have, but rather than the cloud bursts that would have us running for cover and waiting the few minutes it dumped and then get back at. Because the clouds were clearing and a wonder cool evening was in the air, Now it’s all so anemic. Every rain or snow storm is a blessing and temporary reprieve, but no relief. We get an after misting now and then when we are luck.

I actually think the next biggest thing will be mental, spiritual health, how will people (individually and collectively) deal with a world, not of diminishing returns, but increasingly hostile living conditions? With ever more horrors to deal with. While the fat cats continue their idiot greed driven games. Excuse me, guess I’m a tad emotional today and am venting here.

But what can I say, we are dealing with Earth’s global heat and moisture distribution engine. Play those numbers, consider mass and momentum, and what the f we are doing to it. It’s all so fundamentally simple and basic and yes, settled, f’n settled, and we still have insane sociopaths with greedy minds playing every head game and brainwashing trick in the book to make people look away. While people are sweltering away in 115 temps. Wait till the power starts going out. It’s terrifying. And many people really and truly believe nothing untoward is afoot.

Time does indeed fly, but nature is immutable. This well aged movie explains what awaits us in the not too distant future.

I started high school in 69, soaked up all that groovy jazz.

Makes me smile, we had it all figured out. Although today, if you got up to date on insect research, bet you’d be blown away at the layers of complexity that be hadn’t an inkling of. I’ve just had a quick overview so am familiar with only a sliver of the insight, but wow. Way more complexity and even individuality than we could have guessed at.

but nature is immutable

What in the world does that mean?

The laws of nature are immutable?

But to imply ‘nature,’ you mean earth, is immutable?