So far, two bodies have been found in Lake Mead as the water level drops to record lows because of the drought.

The article also mentions a few other findings in other lakes and reservoirs that are drying up:
Mastodon skull
Cars with bodies
Archeological sites and settlements

An odd little side bar to the crisis.

Vegas had a colorful history.

It’s a nice distract for the cataclysm horror that’s stalking us.

And it’s not just in the US 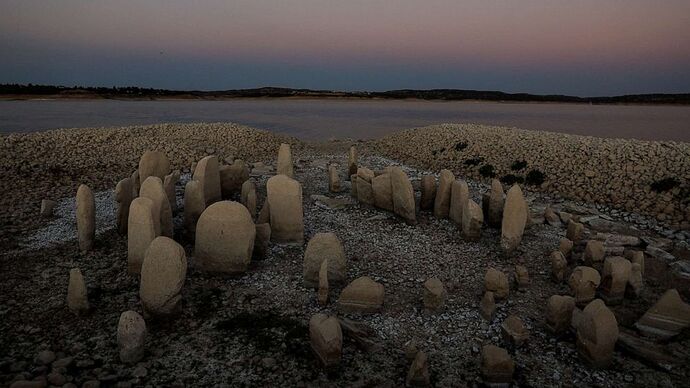 The "Spanish Stonehenge" has reemerged amid Europe's sizzling drought.

As Spain faces its worst drought in 60 years, officials say the water level in the reservoir has dropped to 28% capacity.

And every time I read these stories, I can’t help but think of the old Frog thing…toss a frog into boiling water and he’ll jump out. Toss him into cold water and turn the heat on and he’ll get boiled alive (something like that).

And every time I read these stories, I can’t help but think of the old Frog thing…toss a frog into boiling water and he’ll jump out. Toss him into cold water and turn the heat on and silly frog won’t notice the water getting hotter, and it keeps getting hotter, ultimately allow itself to get boiled alive (something like that).

Not that I ever gave it a try, but we did hear that story a lot, back in the day, until everyone tuned out.
I keep thinking of this album cover: 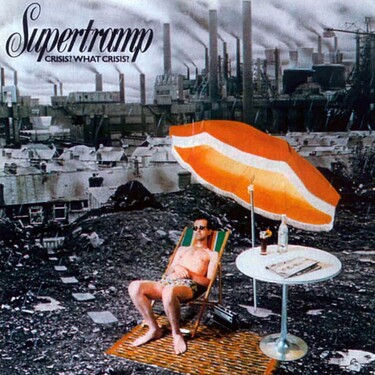 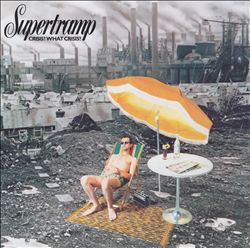 OMG - A not-quite focused read of that was “Supertrump” …

I remember being a little shocked by that. Those were the days of staring at albums reading liner notes to get info on bands

I was busy listening to Donna Summer’s “Love to Love You Baby” album, while my mother listened to old records of Otis Redding and Santana. The Santana album… I can’t believe my mother told me about the naked women in the lion’s mane. I was 9! In '75. I was fine until she told me that.

Back to the thread itself, or as they say, meanwhile, back at the ranch, er, lake:

Multiple sets of remains found in receding Lake Mead. Here’s a timeline of...

The remains have been spotted since May in three parts of the sprawling lake’s western corner, but nearly everything else about them is a mystery.

Oh but while we’re having fun with that, the real story, the brewing horror.

The Southwest is bone dry. Now, a key water source is at risk.

Climate change and worsening drought have driven water stores to dangerous lows. Now the federal government is telling states to drastically cut back.

Recents rains have been life savers, but still not enough. Oh and when it comes, it’s a torrent like seldom before. I actually dug some trenching to help divert water around our cabin. This summer I’ve added extra capacity, so now when the torrent comes I have the capacity to collect over 600 gallons, via some 11 troughs & barrels at four collection points. Which can get transferred to a couple 350 gal cubes by greenhouse another one for our garden lawn area.

Very labor intensive, siphoning and pumping and hauling - still better than driving into town to the water dock. Also now that I’ve got the landlord to see the light, we’ll definitely be refining it as we move forward. 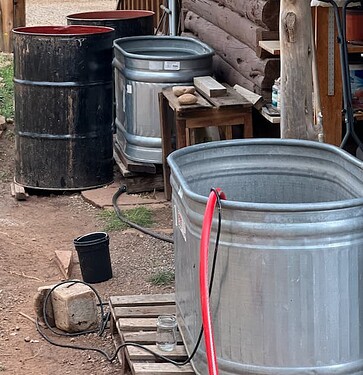 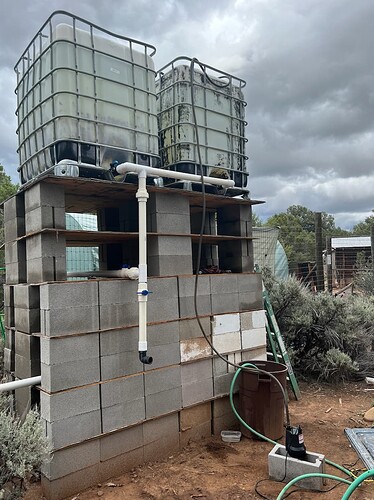 image804×1074 129 KB
I was able to collect over 300 gal in one night, which helped me top off those big guys and ready the barrels for the next down pour, which still hasn’t happened. Supposedly another chance today, though early clouds are looking their anemic as usual. Back in the '80/'90s these conditioned guaranteed an afternoon downpour that would then clear up into a beautiful day as we got back to work.

This past week we had monsoon conditions, and there were heavy clouds and plenty of healthy localized gully washers, as near as two, to three miles away, but nothing beyond a few short lived light showers. The rain itself is more confined, rather than the entire sky opening up, we get to watch localize columns of rain dance across the horizon, blessing one neighbor, bypassing another.

(For the record, that water tower is the owner’s brainchild and doing, the greenhouses are the landlady’s and I play the supporting roll.) 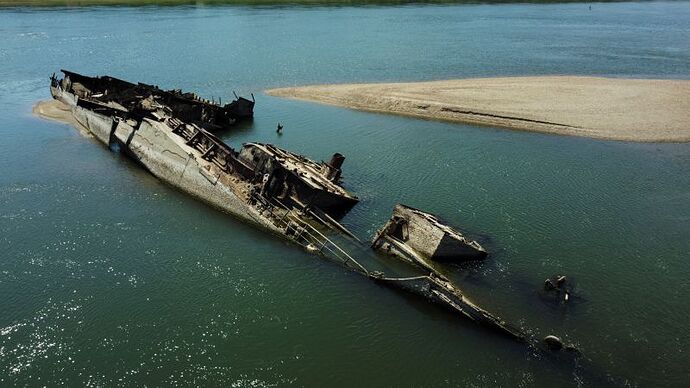 The vessels were among hundreds scuttled along the Danube by Nazi Germany's Black Sea fleet in 1944 as they retreated from advancing Soviet forces, and still hamper river traffic during low water levels. 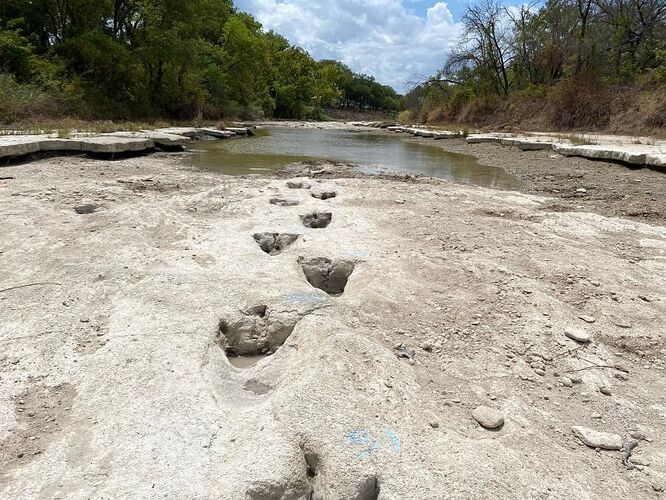 Dinosaur tracks from 113 million years ago uncovered due to severe drought...

Dinosaur tracks from around 113 million years ago have been revealed at Dinosaur Valley State Park in Texas due to severe drought conditions that dried up a river, the park said Monday in a statement. 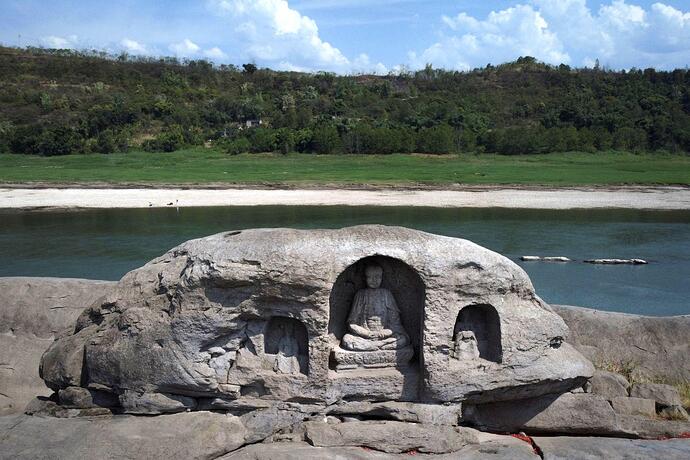 As water levels along the Yangtze River retreat amid China’s driest summer in six decades, a trio of 600-year-old Buddhist statues has been revealed.

Another interesting exposure, with a history.

File this under …Future?

…bodies and even a plane lost elsewhere in the Alps decades ago were recovered.

“We knew with climate scenarios that this situation would come, at least somewhere in the future,” Matthias Huss, head of the Swiss Glacier Monitoring Network (GLAMOS) told Reuters. “And realizing that the future is already right here, right now, this was maybe the most surprising or shocking experience of this summer.” 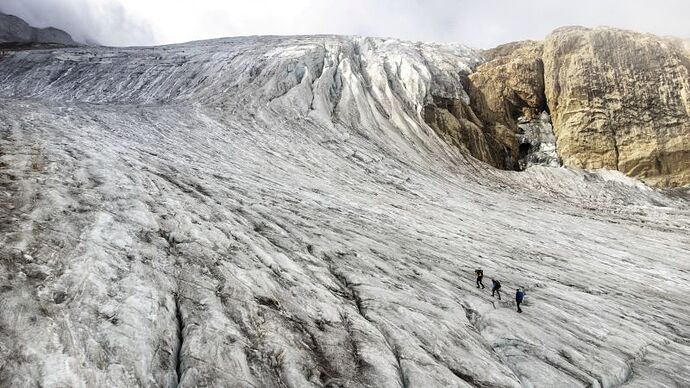 The melt was so extreme this year that bare rock that had remained buried for millenia re-emerged at one site while bodies and even a plane lost elsewhere in the Alps decades ago were recovered. Other small glaciers all but vanished.

Even this hurricane in Florida, that could get my son killed thanks to my moran ex and his family, is said to have been caused by climate change too.

We live within a global heat and moisture distribution engine, which is mainly composed of the lower atmosphere, oceans, landmasses and cryosphere.
The Sun produces the heat and our atmosphere helps hold in infrared radiation (heat).
That system is infinity complex, yet quite simple.

Our atmosphere sequesters heat within our global heat and moisture distribution engine, which is then distributed from our boiling 24/7/365 equator to the frigid poles.

No hurricane is “caused” by global warming - but sure as tomorrow’s sunrise, NO EXTREME WEATHER EVENT IS FREE OF AGW’S DRIVING INTENSIFYING INFLUENCES.

It was predicted over a hundred years ago and the foundational science was never wrong, as years of internally consistent refinement testify

He’s fine. Heard from him today. He walked around in an empty Tampa Bay for a bit and thought it was cool, but he didn’t stay too long because he didn’t know when the water would return. Guess he dad did inform him of that much. They rode the storm better than most.

No hurricane is “caused” by global warming - but sure as tomorrow’s sunrise, NO EXTREME WEATHER EVENT IS FREE OF AGW’S DRIVING INTENSIFYING INFLUENCES.

Yes, Climate Change (it’s not “global warming”) does cause worse hurricanes and other forms of severe, life threatening weather. Scientists have been saying this for a while now. I have to look up the website, I think it’s “Understanding Climate Change” website that explains this.

Nice to hear about your kid. My wife’s kid and family and twin, will be in the run out when it hits the North C./South Carolina border

Well actually, yes it is global warming, global energizing, it don’t mean we don’t have freezing polar regions who’s air masses will be smashing to low latitudes, more often now that the jet stream is getting all upgefuked - but that’s all about the distribution of heat and moisture and air masses.

Then of course we have the Gulf Stream that might well collapse over the next decades, which, experts tell us will will totally put the chill on England, but that’s regional cooling.

When it comes to mass balance of heat, it is up, up, up 24/7/365, so long as our atmosphere and physics exists. Of course, after the heavy weights are accounted for, all sorts of other factors get involved, and there’s lots of confusion between regional and global and local.

But they aren’t kidding when they call it Antropogentic Global Warming.

No it is not. I can explain why too.

Whether referred to as "global warming" or "climate change," the consequences of the widescale changes currently being observed in Earth's climate system could be considerable.This website, presented by NASA’s Global Precipitation Measurement (GPM)...

Global warming: the increase in Earth’s average surface temperature due to rising levels of greenhouse gases.

Climate change: a long-term change in the Earth’s climate, or of a region on Earth.

During the late 1980s one more term entered the lexicon, “global change.” This term encompassed many other kinds of change in addition to climate change.

Finally, hurricanes are part of climate change or rather their strengthening and disastrous effects of recent years, with ever increasing numbers of Cat 4 and 5 hurricanes and fewer under 4.

Increasingly destructive hurricanes are putting a growing number of people and communities at risk.

NPR did a thing about how the weather people need to change their language. Hurricanes can develop quicker now, so if they are seeing a tropical storm, they need to add the warning that a warmer ocean can turn that into a Cat 4 overnight, so evacuation might be warranted.