Can you imagine self-healing concrete? Roman's already invented it

The mystery has been cracked. Structural experts have always been amazed at the quality and longevity of Roman era concrete as witnessed by standing viaducts, the Coliseum, the Pantheon and many other architectural marvels.

Turns out, it’s structure has a long held secret that provides a self-healing property:

Hot mixing, they thought, would ultimately produce a cement that wasn’t completely smooth and mixed, but instead contained small calcium-rich rocks. Those little rocks, ubiquitous in the walls of the Romans’ concrete buildings, might be the key to why those structures have withstood the ravages of time. …

“In every sample we have seen of ancient Roman concrete, you can find these white inclusions,” Masic says, … “The researchers’ chemical analyses of such rocks embedded in the walls at the archaeological site of Privernum in Italy indicated that the inclusions were very calcium-rich.” … "A ready supply of calcium was already on hand: It would dissolve, seep into the cracks and re-crystallize. Voila! Scar healed.

But could the team observe this in action? …" 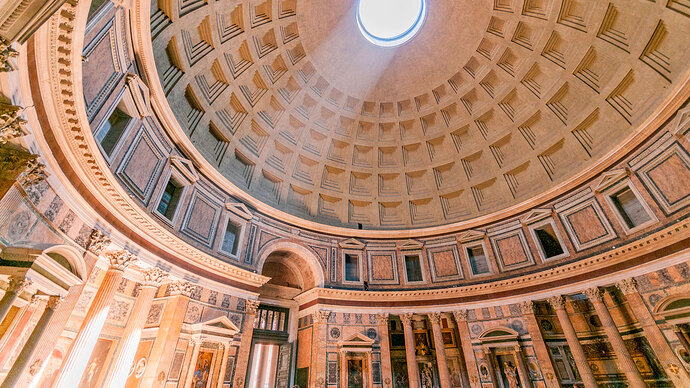 These chemists cracked the code to long-lasting Roman concrete

Roman concrete has stood the test of time, so scientists searched ruins to unlock the ancient recipe that could help architecture and climate change.

We may learn from them.

Nowadays we begin to lack sand usable to make concrete.

I heard this before.

Due to the massive amounts of deaths caused during the Roman conquests, I wonder if the Romans tried crushing bones (for calcium) of the dead and mixing into the cement and accidentally discovered that those building they constructed lasted much longer than those built with just cement and sand. They would have a huge supply if calcium wherever they go automatically!!

Also heard that the dead people they used and tossed them in the foundations of the buildings is what make them resist time and have not cracked like other buildings in history. We cannot be sure they even say the romans found glass that can bend like plastic but ws later destroyed the information.

Yeah, to think that some of the old castle ruins and walls we visit and walk on are fixed to together literally by corpses and DNA!! I’m mean I’m an atheist but eeewww!!!