A facinating look into a conservative mind

You’ve probably all seen this before as it was viral at the time, but it was 7 years ago and it still amuses me greatly to this day. But look at it from a psychological point of view and it’s simply fascinating.

This is a video of a conservative woman going nuts on election night 2012 because Romney is losing. At one point she says something along the lines of “Romney isn’t even going to get the popular vote, so we can’t even impeach Obama!” I’m not sure exactly how she thought that could happen if Romney won the popular vote. I’m sure there was some secret idea floating in conservative circles that they could do something about it if the thing which helps them get elected ever helped a liberal get elected. But the whole thing is interesting.

She was right about one thing. In the middle part of the vid, she is extolling other right wingers for not recognizing back then (2012) that they should be using Facebook, Twitter, etc against the Left. This is in fact what happened in 2016, the forces of the right weaponized Facebook, Twitter, YouTube, etc. and won.

She was wrong about Obama becoming a Muslim after he left office.

I can identify with her level of passion, without even needing the dis-inhibitory effects of imbibing alcohol. Were election night, a year from now, be resulting in 4 more years of T_rump, my outrage and despair would be as great.

As of late I find myself seriously wondering if he will go down in history as the first ex president to be sentenced to prison. That’s why he’s so desperate to keep an office he never really wanted (until he got a taste of the power, at least). When he leaves office there is a real chance that criminal charges will be filed immediately in several jurisdictions for a litany of crimes. He stole from a charity. And that one is only punishable by paying the money back, apparently, so that’s the least of what he’s done.

Gomer would be an infinite improvement over T_rump.

He is currently a criminal who is above the law. That only changes when he is no longer President. The Senate could vote him out of office (just 20 repubs is all it would take - cause the Dems will be all in). But they probably will continue supporting T_rump’s criminal behaviors. But if he were removed from office, there are a lot of things that could result in his being imprisoned for. But I imagine he could make a deal to avoid prosecution if he stepped down, and/or the new POTUS could wipe away any accountability for federal crimes.

More likely what will happen is that T_rump will not be removed, and he will be even more encouraged to do anything that he wants for his own benefit. With 4 more years he could very conceivably take on so much unilateral power that he could stay on or appoint his own successor (who would protect him).

LOL, I never saw this but SO MANY THINGS go viral.

This was so stereotypically over the top, I thought it was parody. But no.

It doesn’t appear she has posted in 5 years. I’d love to know what she thinks of Trump. I don’t think she would be down with Pizzagate or Q, because she’s actually correct about right-wing conspiracy theories (Birtherism, etc.) She also rightly points out the illogic of the Right’s biggest theory now: that news reports are being faked.

I just want to point out some numbers though… 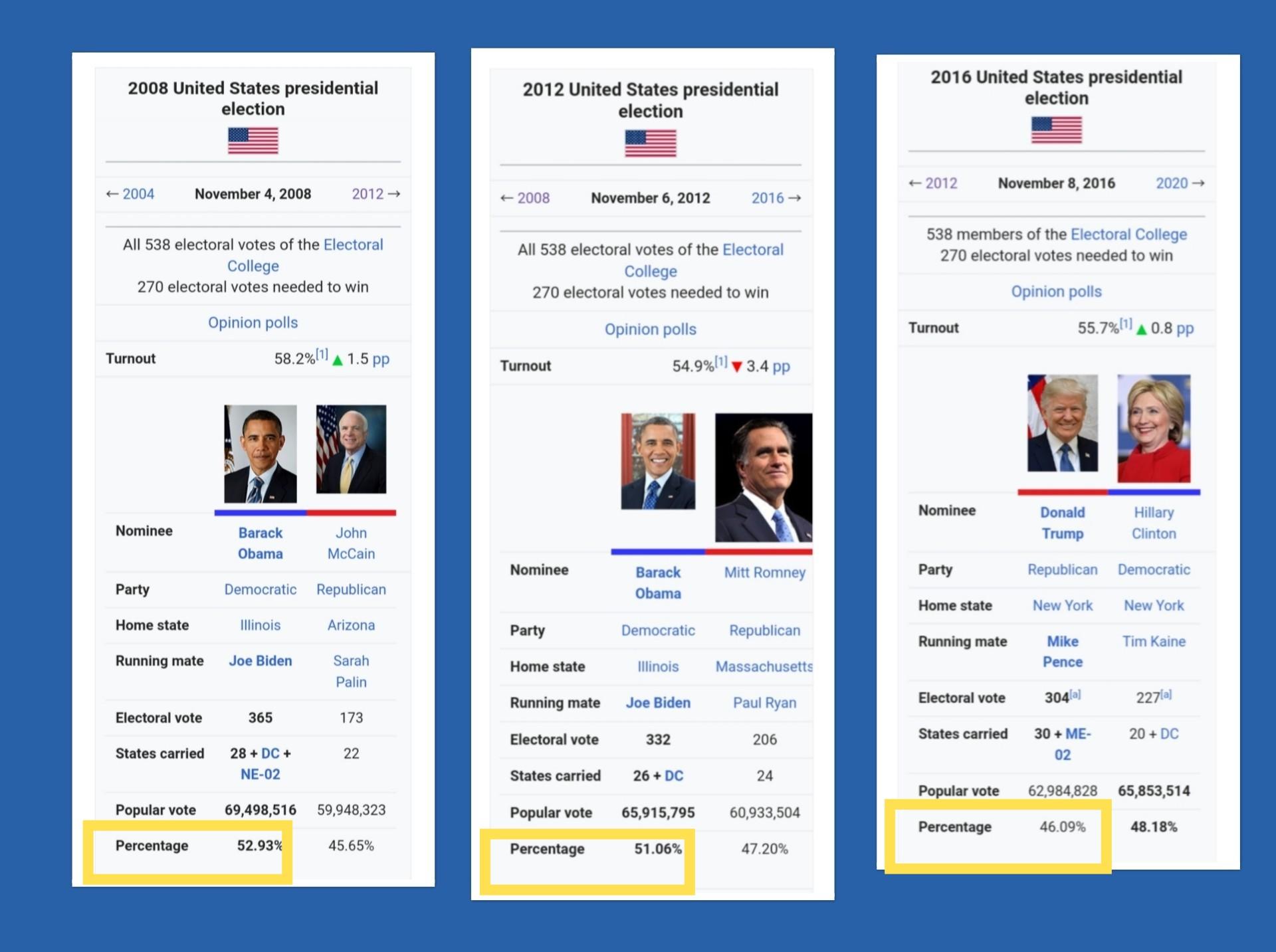 I see that Obama had a higher electoral vote, each time, than did T_rump. I see that the Dems can lose the Presidential election while having a >2% lead in the popular vote.

That woman has probably morphed into something horrifying, after 3 years of exposure to T_rump. People who had previously seemed to be stable statesman types, have been corrupted just by being in T_rump’s orbit, turned in to obsequious T_rump rump kissing liars and justice obstructers for T_rump.

and we’d have to elect Gomer Pyle next to keep that title from him.

Christ I'd be more than willing to take my chance with Gomer Pyle over Trump any day. He actually wasn't that dumb and he respected people and civility. I'm certain we'd be in safer hand had Gomer Pyle taken the oath in 2017.

(and I didn’t even like the show - in fact, it may have been the first time I realized I could never join the Army. No one was going to stand there yelling and demeaning me like that, and expect me to stand there and take it. But, I digress.)

Oh, I see Tim got there before I did. What’s that they say about great minds . . .

I see that Obama had a higher electoral vote, each time, than did T_rump.

I see that the Dems can lose the Presidential election while having a >2% lead in the popular vote.

POTUS Gomer announcing the mission that took out Al Bagdhadi:

Surprise! Surprise! Surprise!, Shezam! Abu Bakr Al Baghdadi has been neutralized by our special forces. He blew himself up while being chased down a tunnel by K-9 recruit, Conan, a German Shepherd member of Delta Force. Despite Conan’s heritage of “German” Shepherd, he is considered to be all American.

Pyle would have been an awesome president. And not just by comparison to whatever it is we have now. He wasn’t smart, but he was a good man (fictionally, obviously). Right now we have not smart and not a good man, so we got nothing.

It has been my experience these last 2 or 3 decades that Republicans will cheat, steal and, if they could get away with it, literally kill to get and keep power. They don’t care about the country and they loath democracy because they think we’re all too stupid to be making decisions (yes, the Republican politicians I have known have literally thought they were smarter than most of the people). They always have a double standard because the narrative with them is “It’s only fair if I win”.

When Democrats win or Republicans don’t win big enough there are “voter irregularities” and “voter fraud”. They lost because the other side cheated. Never mind that almost every case ever of voter/election fraud has benefited Republicans.

And when they can’t pass a law to outlaw abortion outright, they can pass a law requiring women seeking abortion to undergo invasive, painful, emotionally scarring and unnecessary medical procedures.

I haven’t had any respect for the Republican party for a couple of decades now. Ever since that giant pussy Reagan let North take the fall for his illegal shit. And it has gotten worse since. They are absolutely in corporate pockets. Federal office is a sure-fire way, for both sides, to great wealth. But Republicans always favor corporate interests over literally everything else, including the very survival of the planet. The time will come when climate change can no longer be denied. And do you know who’s going to pay the massive bill to fix it? We, the taxpayers, are getting that bill. It will be government, not corporate spending which goes toward fixing it. That’s why they don’t care. They won’t have to pay for it.

Dammit. Now I’m depressed. I should stay out of this section of the board.

We shall overcome… someday.

Everybody dies eventually. You know the world is messed up when that’s a comforting thought.