What's all this about a quantum computing breathrough?

Well Widdershins, meaning counter-clockwise, is a cool name as it suggests, I think, that you are willing to go against the accepted norm.

I grew up as a nerd and a geek before it was cool. I have never been “the norm”. So yeah, I would say that is pretty accurate. But I just chose the name because it was a cool word in my favorite poem, to be perfectly honest. I think you’ve given it more thought than I did.

I can certainly see that. Then it might entertain you to know that by the end of the poem the devil is walking deosil instead of widdershins, hence his “conversion”.

For Halloween it seems appropriate to present the last verse of Crowley’s “Conversion of the Devil”:

Oh how the good converted Fiend
Worries those Postulants unweaned!
Though now he dances deosil
He poinds them many a purging pill.
He cleans them from their piggish food;
He brings them to beatitude.
“Hua is God!” quoth Asmodee:
“There is none other God than He.”

An extraneous thought: Do you think a quantum computer could get to the bottom of pi?

My intuition tells me that pi can never be resolved into a whole number.

a) it is a measurement of infinity which is immeasurable in concept. If we could assign a whole number to infinity it would no longer be infinite.

b) it is a measurement of probability which can only be an approximation, but never exact else it would not longer a probability but certainty.

c) The very algorithm used by mathematicians to represent the ratio of a circle’s circumference to its diameter is the lowercase Greek letter π can never change regardless of the size of a circle.

This is why it is called a transcendent number? It applies to a measurement of any circle including a circle of infinite size.

Not being Schrodinger’s cat, however, I cannot fathom how something can be a 0 and a 1 at the same time.

They cannot “be” both at the same time. They are future possibilities (probabilities) and the mathematical decision is made only at the time of the quantum event. That is when one or the other “becomes” reality.

The term superposition is nothing more than a description of unknown probabilities between two possible states. They do not yet exist until the event occurs. David Bohm called this the “Implicate”. 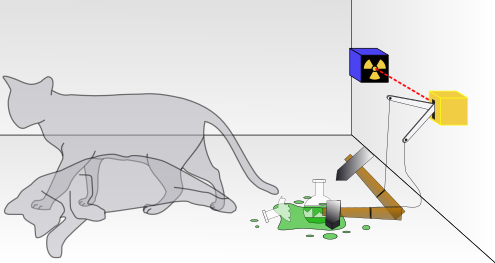 Schrödinger’s cat: a cat, a flask of poison, and a radioactive source are placed in a sealed box. If an internal monitor (e.g. Geiger counter) detects radioactivity (i.e. a single atom decaying), the flask is shattered, releasing the poison, which kills the cat. The Copenhagen interpretation of quantum mechanics implies that after a while, the cat is simultaneously alive and dead. Yet, when one looks in the box, one sees the cat either alive or dead, not both alive and dead. This poses the question of when exactly quantum superposition ends and reality collapses into one possibility or the other.

The error lies in the assumption that something already “is” before it has “deterministically become” in the future.

But it “is” only an “implication” of possible future states. It is really not a difficult concept unless you interpret it incorrectly.

I believe he was referring to a bit being both 0 and 1 simultaneously in quantum computing. I only have the vaguest glimmer of understanding of that myself, based completely off the “dumbed down” press releases on the subject.

I believe there are several types of superposition, each filling a distinct function

a) Linear superposition, which yield a “sum” of both superposed values

b) Quantum superposition, which yields a selection from two possible states.

Another example is a quantum logical qubit state, as used in quantum information processing, which is a quantum superposition of the "basis states" |0> and |1>.

This means that the probabilities of measuring 0 or 1 for a qubit are in general neither 0.0 nor 1.0, and multiple measurements made on qubits in identical states will not always give the same result.