What is meant by WW3?

WW2 ended with one side getting nukes, but then others followed quickly and the nuclear arms race began. It was not unlike the arms race that led to WW1, so fear of using nukes was real.

That kind of faded as the stupidity of using them, especially with thousands in the US and USSR, became obvious. The wars moved to proxies, and wars of information.

But now, stupid has returned. Even stupider are people who say we should do what the person who has the nuclear button says we should do, that is, we should give in to their threat.

Less stupid, is realizing the world has been giving in to the threats all along. Citizens of all nuclear nations have little say over how they are deployed, or how the treaties work. Knowing we have that in common might be the key to bringing the threat to an end.

I remember a joke by Steve Jackson Games. The idea was to play a nuclear war.

I’m not sure a full exchange of nukes is a real threat. I hope not anyway. I think if Putin threatened that, he would be stopped by his fellow Russians. Or we would take him out.

A first nuclear strike is still in the USA war toolkit 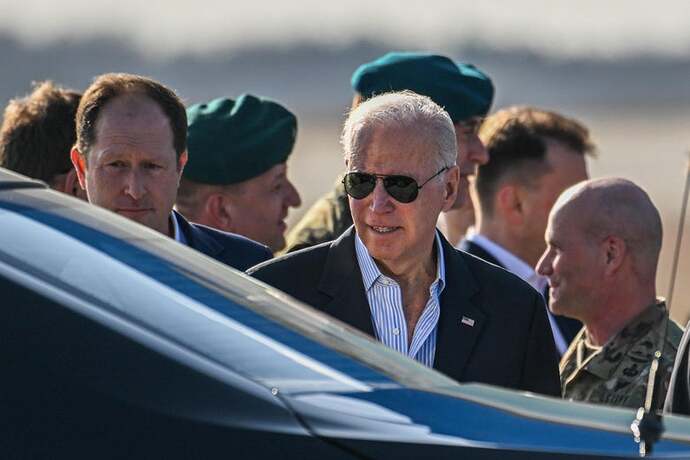 He know that if the U.S. took its arsenal off the table, our allies would throw a fit.

The headline is a little decieving, as usual. It’s hard to put the whole picture in a few words. The problem is, we have them. Some believe they are a deterrent, but deter what? Putin is testing that limit.

A first nuclear strike is still in the USA war toolkit

He know that if the U.S. took its arsenal off the table, our allies would throw a fit.

Seems pretty straightforward.
But then you want us rolling over for Putin, so guess you’ll never get it.

Oh and the undercurrent, Biden isn’t as insane as Putin, not that he’s perfect, which is, I guess, what the princes of this world are looking for, perfection.

Some believe they are a deterrent, but deter what? Putin is testing that limit.

Putin is testing (showing) that nukes are a deterrent to a multi-national, military response to his aggression.

If there were no nukes, I wonder if Putin would still have tried to take Ukraine.

I’m afraid to think of what the world would be like if we spent the nuclear dollars on guns, tanks, bombs, etc. Borders would be fought over constantly. Or would war be more real to more people and we’d finally call for an end to it. Like 1630.

Glass half-full (in the hypothetical alternate reality):
What about the cost of the containment and cleanup of nuclear weapons and energy?

This is not intended to be anti-nuclear. The article calls for “Responsible Nuclear”

At the moment, the budget for the Department of Energy is about $30 billion. Of that budget, about $12 billion is for the nuclear weapons programs. That leaves us $18 billion to use for all things related to energy — nuclear power, fossil fuel, wind, and solar. About $6 billion, one third, is used to deal with the legacy high-level waste from the Manhattan Project. We as taxpayers pay $6 billion every year to address that problem, a huge cost that we will incur for many decades into the future. The projected total cost of clean-up after the Manhattan Project is well over $300 billion.

However, a global conventional war is more possible now than it was one year ago.

America has always been more irresponsible

Well, I do want to play that game. Although, figuring out how to score could be a challenge:

USA: Major effort to develop it in the first place. Others: We had to beat Nazis in getting that first.
USA: Dropped 2 bombs, the 2nd was totally gratuitous. All others: zero
USA: Major buildup, sacrificing being a creditor nation. We have never recovered from being a debtor.
USSR: Also major buildup, however they were lying to the public about all those missiles in the parades (they didn’t have warheads).
US/USSR: developed hotline system so leaders could talk if WW3 started
US/Russia: worked together to bring the warheads back from the former USSR nations
Russia: most recent plausible and public threat to use them
Others: smaller arsenals. Some have similar sacrifices to their economy.

Western leaders have lost their remaining minds. Indeed, do they want to destroy the entire world in a nuclear war? We are not too far from it. NAZO and EU support the Lithuanian government to block Russia’s connection with its territoríy, its Kaliningrad enclave.
But there is a treaty to solve this unfortunate geopolitically situation.
“No. 31342
LITHUANIA and RUSSIAN FEDERATION
Agreement concerning international road transport (with
protocols). Signed at Vilnius on 18 November 1993
Authentic texts: Lithuanian and Russian.
Registered by Lithuania on 28 October 1994.”

Lithuania is a member of NATO, so if Russia attacks it because of the blockade of Kaliningrad when all NATO members go to war, the consequences will be a total nuclear war.
And this mentally ill malice and hypocritical hostility of the West towards Russia (even if Russia is an aggressor) is leading the world to irreversible destruction.
I wrote to the Lithuanian government, although I do not think they are interested in what I asked to rethink this madness blockade.
here is their connection link.
https://lrv.lt/en/relevant-…
Anyone can write a warning to them if they are determined and brave and want to do it for peace.

Have you ever heard of the Internet or Google Searches???

You really should try fact checking and getting the whole story. 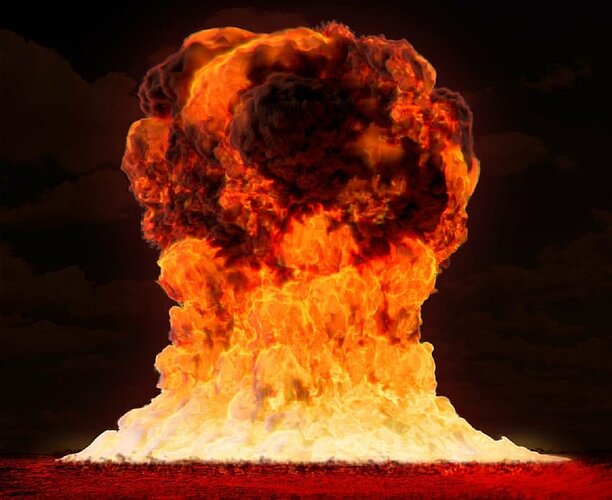 I’m not saying this somehow makes it okay that USA has lost some nukes along the way, but what the heck do you expect? Besides at least in our country we can talk about it, try having this discussion in Russia. Heck Guy why not move over there see how you’d like it for yourself, you just might learn a few things. 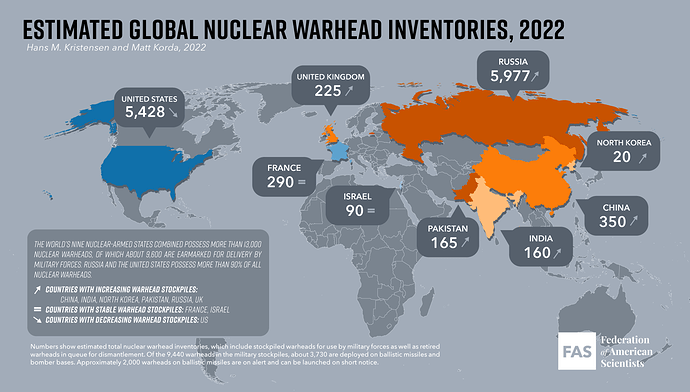 Globally, the overall inventory of nuclear weapons is declining, but the pace of reductions is slowing compared with the past 30 years. 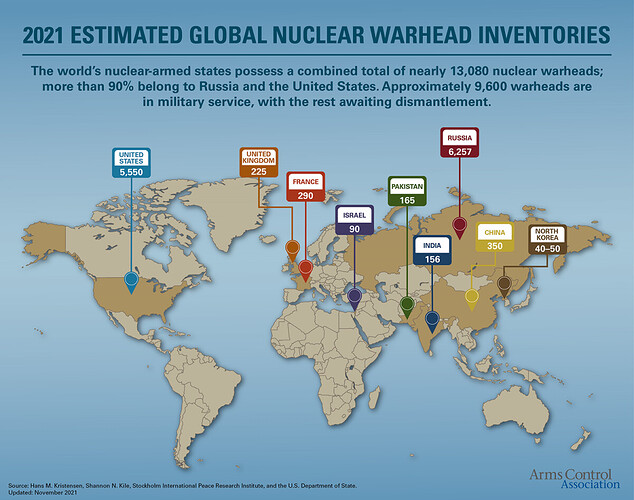 People really their more weapons now, diseases, kineteic weapons, and even space weapones that can do the same as nucealr weapons, Truth be told remember it isn’t our fault of this generation all this happen this was decided 30 yrs before we are born what age we were going to enter new age in space. When Kennedy gave his speech we were all going this route and ended this stalemate in war. Now neither Russia won or USA, more stalemate when India and China had missiles too, and now the whole world can aquire them. No really people we are either in the brink in new age of space or armaggedon in this time.

Really people were not in ww3 were at ww12 the wars before proxies all of them the sums of all fears, really we have

theya re prozy wars that Russia and USA use, without doubt we are in 12th or 13th and soon 14th with new war in IRAQ or IRAN.

And now we have this

Germany thinking it’s leading the war against theya re insane, the french, english, americans are doing that and no nukes good heavens.

Americas war on china and russia

North Korea is a wannabe.

They’re shooting missiles because the world has stopped looking their way.
Every year they do their sword-rattling dance as US and SK do their training exercises.

I’ve seen the “imminent end of world” plenty of times. I won’t hold my breath.
(Don’t hold your breath, it’ll make you blue)

Have you ever heard of the Internet or Google Searches???

You really should try fact checking and getting the whole story.

I’m not saying this somehow makes it okay that USA has lost some nukes along the way, but what the heck do you expect? Besides at least in our country we can talk about it, try having this discussion in Russia. Heck Guy why not move over there see how you’d like it for yourself, you just might learn a few things.
Status of World Nuclear Forces – Federation Of American Scientists

Nuclear Weapons: Who Has What at a Glance | Arms Control Association

It looks like Russia can talk about it and it probably didn’t happen:

The Nuclear Threat Initiative (NTI) also published a report in September 1997 that quoted former Russian national security advisor Alexander Lebed, who claimed that the Russian military lost track of upwards of 100 nuclear suitcase bombs. Lebed, who made his claims on the CBS news program Sixty Minutes, suggested each of the weapons was as powerful as a one kiloton warhead capable of killing as many as 100,000 people and could be detonated by a single person. However, Russia countered that Lebed is mistaken and may have confused “dummy small-scale” training devices with actual weapons.

In the nearly 24 years since the report, there have been no known examples of any Soviet-era suitcase bombs being discovered, and fortunately, no such weapons have been employed by a terrorist organization.