Accounts of UFO directed by minds from other societies not from Earth indicate massive speeds. Under the laws of action and reaction we understand: if those 'rocket’s accelerate so quickly the inertia would ‘squash’ and kills us instantly if on board. So the conjecture is that the machines are probes without lifeforms or the forces used are more like a ‘pulling’ force that keeps mater in place. In fact in the very advanced and slightly sexist science fiction made in 1987 and way ahead of its time the deceleration process in a human light speed craft was aided by a ‘freezing’ in situ beam to hold human matter together… Now we think we know a lot about physics but the new theory of microvita if proven supports existing physics but opens up a new dimension. How do those alien craft operate? I do not know but the process of inertia raises some interesting questions… (See www.microvita.org) I will at some stage put an article link here called - The Evolution of Mind - written by me. I like open forums.

Microvita is not a scientific theory, it’s voodoo from the mind of an Indian guru and spiritual leader with no scientific knowledge. It was conceived in 1986. And it not only does not support existing physics, it is completely separate form existing physics envisioning a new form of matter which is smaller and “subtler” than physical atoms and sub-atomic particles, contributing to “pure consciousness”. No such particles exist in any model of physics nor is there any observational data to suggest that they do or that “pure consciousness” is a thing. This “microvita” nonsense was not conceived by any scientific mind from any scientific studies. It’s the completely unfounded nonsense of a spiritual leader who believed in chakras and other magical nonsense. There are several other issues with your post. And it’s not “new”.

First, the “U” in “UFO” stands for “unidentified”. When using the term “UFO” you are acknowledging that you are talking about “unidentified” objects, which you then go on to identify as alien spacecraft. UFO does not mean “aliens!” UFO means something flying that has not been identified and you do not get to simply assign an identity to it based on personal preference.

Second, what evidence have you seen that these UFOs are “directed by minds” at all, much less minds from “other societies not from Earth”? Are you familiar with some mind reading technology the rest of us don’t know about that has detected and deciphered these controlling brainwaves? If you’re simply inferring that, based on the speed and movement, it could not be directly flown then why do you jump straight to direct mind control when a computer AI is perfectly plausible? Even that is making some completely unfounded assumptions, that you were able to correctly “identify” an “unidentified” flying object as some sort of craft AND that the origin of that craft is a place in the universe in our current time other than Earth. You could just as easily claim they are demons, as one UFO enthusiast I used to chat with occasionally did. Or maybe God made them. Or maybe they’re not craft at all. Maybe they’re witchcraft. Maybe they’re actually a new species not yet discovered on Earth that lives in the molten core of the planet but occasionally ventures out through volcanoes. Maybe they’re top secret drones using technology so advanced and so secret we can’t even imagine it. Maybe they’re a smudge on a camera lens, diffracted light, a bird much closer than the viewer assumed, a stationary object in the sea and the camera was actually what was moving, an airplane, a helicopter, a meteorite… There are a LOT of possible reasonable explanations to go through before you start jumping to completely made up explanations. And with no empirical evidence to support the existence of alien life despite huge, worldwide efforts to find it, much less intelligent alien life, much less advanced alien life capable of both locating us in the vastness of space AND getting to us there is just no reasonable reason to even suggest alien visitation, much less claim it.

Inertia negation is a hypothetical process causing physical objects with mass to act as if they were of lower mass or were massless. The effect is the opposite of adding ballast. No such process is known to exist in the real world: if current understanding of physics is correct, such a process would be impossible. There is currently no known material or technology that is able to eliminate or negate the effects of inertia that all objects with mass possess.

According to Newton’s first law, “A body will continue in its state of rest or of uniform motion in a straight line, unless compelled to change that state by a net force.” Inertia is the resistance against changes in the motion of an object. Objects within objects each possess their own inertia, and will collide with each other when the containing object is moved.

A device that would be capable of inertia negation is described as being capable of reducing the inertia of both the larger containing object, and of all contained objects within,what is the best pot for an aloe plant, to make changes in motion easier, and to reduce or prevent damage due to internal collisions. The inertia is not absorbed or redirected but simply ceases to have a physical effect.

Antimatter, while being the opposite of matter, has the same kind of inertia, with the forces oriented in the same direction, as normal matter. Thus, storing antimatter on board a vehicle made of matter would not achieve any kind of inertia negation.

Artificial gravity could probably be used to negate inertia. It wouldn’t be perfect. Every interior surface would have to be able to produce artificial gravity on demand because of the inverse square nature of gravitational influence. And it would take some pretty hefty computer calculations to set off all the gravity generators at the right strength and time to have the desired effect, but I doubt the computer power is outside the realm of what we could do even 10 or 20 years ago.

What I’m saying is that it’s not outside the realm of possibility. If someone wants to convince me it exists today, though, they’re going to have to show it to me or refer me to a well qualified science professional who has seen it and has been peer reviewed. I actually hold that in higher regard than seeing it myself because you could potentially fool me.

That says it all.

According to this intuitional theory microvita are entities which come within the realms both of physicality and of psychic expression.

They are smaller and subtler than physical atoms and subatomic particles, and in the psychic realm they may be subtler than mind–stuff, and contribute to “pure consciousness”.[1]

The author predicts that they will soon be recognized by conventional science.[2]

According to the Dutch microvita researcher Henk de Weijer “microvita are tiny little creative catalysing agents. They build atoms of matter, biology and mind, while cooperating with the characteristics of subatomic particles and pure energy”.[3] and so on and so forth. …

Yeah and I got a scientist who’ll raise you, a universe full of itty bitty “conscious agents” , so you don’t have to do any thinking on your own any more.
citizenschallengev3 October 21, 2020, 10:47pm #6 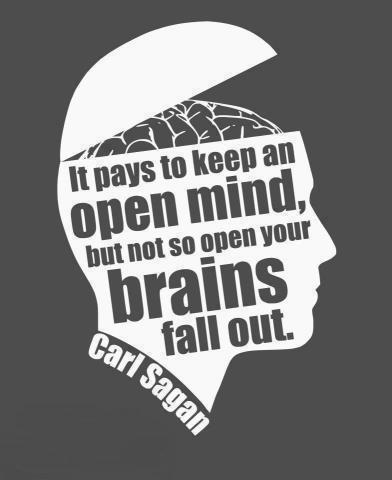 Although it appears Carl wasn’t the originator of this profound quote - still that doesn’t make the saying any less insightful.