This morning I saw an editorial from someone on the Washington Post saying that Trump clearly “won” the debate last night. The writer said that he came off looking “Presidential” while Nancy Pelosi looked irrational. Gosh, did I watch a different address in some parallel universe? (I did also watch the History channel’s “Project Blue Book”… hmm…) It was clear to ME that Trump was simply reading a speech that someone wrote for him. He did didn’t sound like himself at all. When did he ever hold the hand of someone suffering? When has he even noticed anyone but himself? Honestly I don’t understand what he thinks he’s doing. It seems to me that he’s just digging his own grave with the border wall hysteria, unless he’s desperately trying to divert attention from something else that he doesn’t want anyone to pay attention to (like the Mueller investigation). Does he seriously believe that the American people have an attention span as short as his own?

Oh, do you mean bullfrogs, cicadas, things like that?

I can’t verify any of this of course, but much of it is public knowledge and a matter of connecting dots. If the conspiracy theory he lays out here is real, it just proves that conspiracy theorists are useless, because when you have a real one, they miss it.

I was talking to a friend who puts forth this theory – the Wall is just Trump’s way of getting back at the Democrats for winning so many seats in the last election. He can shut down the government and put all those people out of work without worrying about being held responsible for it. If the Democrats back down, he wins. If they don’t back down, he still wins because the people who voted for him will blame the Democrats anyway. As far as he’s concerned, there is no down side.

Plus you’re forgetting that damaging our government is exactly what their game plan was anyways.

Interesting seeing that Mike Yohe is still a believer. And no Russian collision either. ey

You got that wrong. There is a lot of Russian collusion. The Democrats, DOJ and FBI had collision with the Russians. I have not seen any proof of any collusion with Trump. If you have any proof, I would like to see it.

Proof? What the hell is proof in your world? Please define.

From you statements about climate science something I’ve kept up on all my life, I know you have zero respect for any evidence or proofs that don’t fit your political agenda. You also use the same subjective judgement for whom you consider an expert, ignoring education and professional background, instead any crackpot who agree’s with you, gets labeled an expert.

As for the Trump Russian connections and collusion, you’d have to do an awful lot of homework to catch up on all of it, and i doubt you have the stomach for it.

Where’s you’re proof. Just what I expected, a data dump of junk and fake news and political cover-up. The Democrats have been breaking the laws and their defense is to lie and point the finger at Trump. Of course, this was only possible because there were and still are a lot of Republicans in the swamp too.

Have you heard of the Trump dossier?

The dossier was operated by the Democrats, DOJ and the FBI and it was created with collusion with the Russians.

You can back the Deep State and push for a communist government, but don’t expect us red blooded Americans to just roll over.

Question. Did the DOJ and FBI put spies in the Trump campaign?

Of course, the Trump collusion was part of the Trump dossier compiled by British intelligence officer Christopher Steele who had meet with the Russians to gather information. Hilary was controlling the DNC which was broke. Hilary, McCain and the FBI paid for the dossier. Common denominator was for Trump to lose. When Trump still won the presidency, which was never expected. Then the fake Trump dossier had to be buried and stories of Trump collusion had to be spread as part of the cover-up of the Trump collusion use in the dossier. You are no doubt helping in that cover-up. The question I have, what is your motive?

It seems to me that anyone wanting to be a progressive atheist in a democratic society would understand that the DC swap needs to be drained for the government to work properly and the people to be happy.

As Actor Jon Voight says, progressive is just another word for communist. There seems to be a lot of people thinking that way today. Specially on the university campuses. It is no secret the Democratic party is supported by the Socialist and Communist organizations.

If you really want a secular society. Then socialism and communism are not the path to a secular society where the people will be happy. In fact, if the county continues down that path. We would be better off teaching creation in schools and keeping a democratic society.

From you statements about climate science something I’ve kept up on all my life, I know you have zero respect for any evidence or proofs that don’t fit your political agenda. You also use the same subjective judgement for whom you consider an expert, ignoring education and professional background, instead any crackpot who agree’s with you, gets labeled an expert.

What are you drinking? If you’ve kept up on climate science all your life. Then answer the simple question. Where is the ocean rise water from all this warming you talk about? Nothing political about the question. Just simple fifth grade science.

Here's some more, https://sealevel.nasa.gov/understanding-sea-level/regional-sea-level/ice-mass-loss, lots of stuff to go through there

As they say: Horse there’s the water, you figure out the rest.

Then they go on to say;

This is at odds with the observed accelerating mass loss from both Greenland and Antarctica (Rignot et al. 2011), and the IPCC report explicitly stated that its estimates “exclude future rapid dynamical changes in ice flow”. With this caveat, the IPCC projected an overall rise between 18-59 cm for the time span 1990 to 2095.

That the IPCC with the same 2-degree warming is only putting in a sea level rise from 7 to 23 inches. One would think that being in the hottest part of the intermediate cycle. That the IPCC rise is matching Mother Natures rise of natural Global Warming in the next one hundred years.

If only there were a test which could be administered to determine if somebody is a shill.

News break, they forgot to figure in the wind. 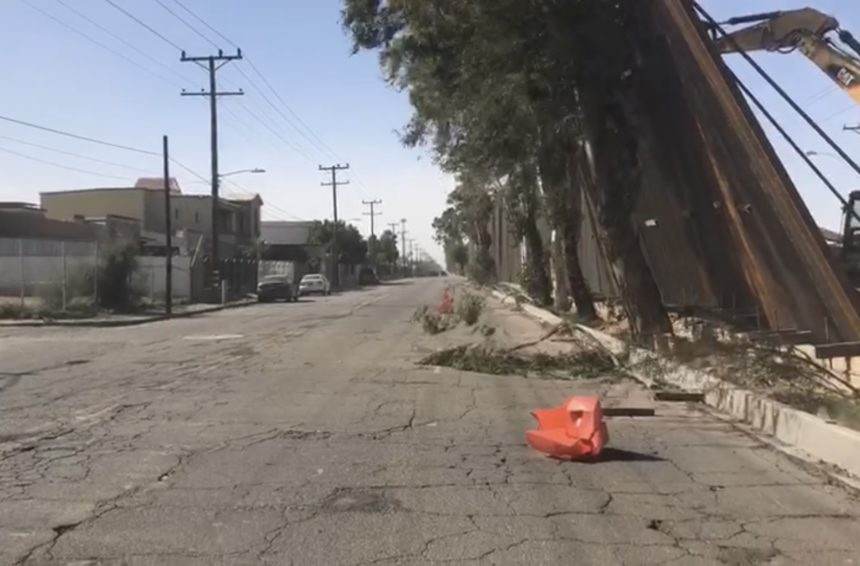 That the IPCC with the same 2-degree warming is only putting in a sea level rise from 7 to 23 inches.

You can only say ignorant garbage like that because you don’t keep up on the news - and love making it up:

IPCC only reports the science it receives, so tends to be old news and the global situation is rapidly changing.

IPCC is known for being terrified of the right wing attacks so has gotten so conservative it’s figures are all at the low end of what’s unfolding upon our planet. But you need the intellectual integrity to keep up on the news, as opposed to keeping it within the FOX Republican propaganda bubble.

Jeebus! The NEW T rump border wall falls over and damages trees from wind gusts of no more than 37 mph.

What design! By our immaculate builder in chief. What soundness of construction! The wall is still partially standing, so illegal immigrants will still have to go around the part that is still held up by trees. If the wind had blown the other direction, the segment of wall would have been flat on the ground. No trees on that side to hold it up. Did T rump know that the wind only blows in one direction in that part of the country? Does it?

How wonderful we have a POTUS who protects us from the scary immigrants with his vaunted wall, sort of, not really. 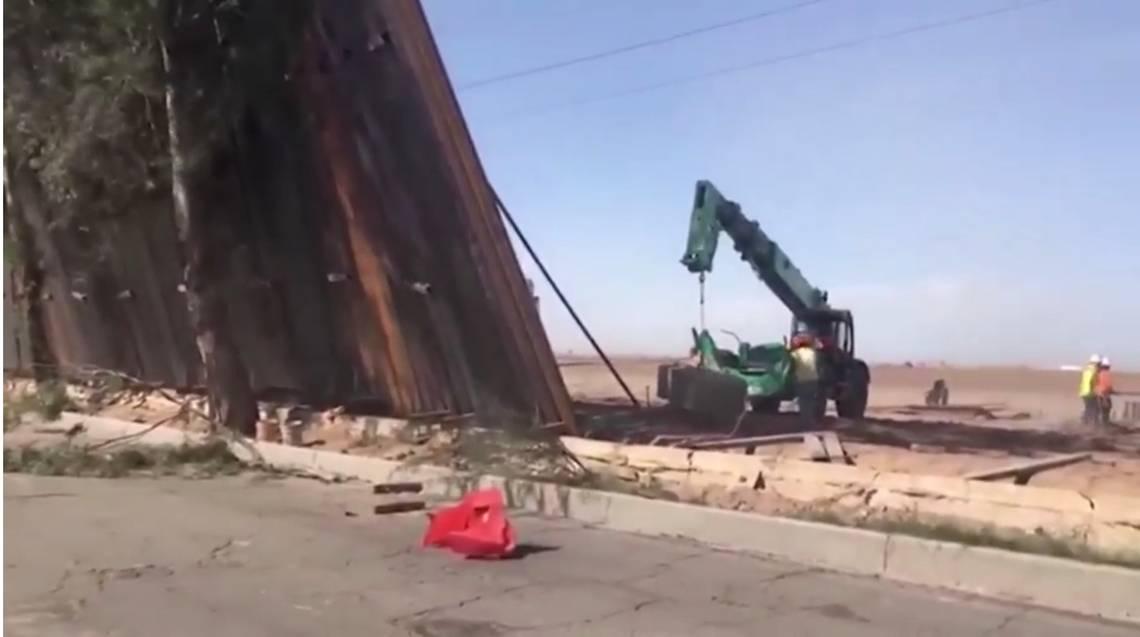 To be fair, the constructors allege the concrete had not fully set. But why be fair to T rump? Since when was he fair?

You got that wrong. There is a lot of Russian collusion. The Democrats, DOJ and FBI had collision with the Russians. I have not seen any proof of any collusion with Trump. If you have any proof, I would like to see it.

Oh my god, is this still a thing? Trump Jr's emails!

Good morning Emin just called and asked me to contact you with something very interesting. The Crown prosecutor of Russia met with his father Aras this morning and in their meeting offered to provide the Trump campaign with some official documents and information that would incriminate Hillary and her dealings with Russia and would be very useful to your father. This is obviously very high level and sensitive information but is part of Russia and its government's support for Mr. Trump - helped along by Aras and Emin. What do you think is the best way to handle this information and would you be able to speak to Emin about it directly? I can also send this info to your father via Rhona, but it is ultra sensitive so wanted to send to you first. Best Rob Goldstone

Thanks Rob I appreciate that. I am on the road at the moment but perhaps I just speak to Emin first. Seems we have some time and if it's what you say I love it especially later in the summer. Could we do a call first thing next week when I am back? Best, Don

I mean, come on! Is it not collusion because the emails don't say:

Is THAT would it would take to see “evidence”? Seriously. We BOTH know that if it were spelled out that clearly and in no uncertain terms your argument would switch to “collusion is not a crime” JUST like the Republican argument did when collusion became clear.
citizenschallengev3 January 31, 2020, 4:29pm #18

To be fair, the constructors allege the concrete had not fully set.