Not sure who follows conspiracy theories here. Sydney Powell was the source of a lot of the craziness last year over the rigged election. She was officially part of Trump’s team for a while, but even he had to let her go. That should have been a clue that she is totally off the deep end. And I’m using nice language because I’m a moderator.

So, that the dust has settled, and she is being sued by the people she was accusing of attempting to destroy democracy, she is now telling us her claims were so outrageous and baseless that no one in their right mind would be expected to believe them, THEREFORE, she can’t be sued for it. This will not be shown on FOX. This will not be in the feed of your local facebook nut job. This is a peek behind the curtain, the woman with the dials and levers telling you that you had a brain all along.

Sidney Powell has moved to dismiss Dominion's defamation lawsuit. She argues that when she accused Dominion of being part of an election-rigging scheme with ties to Venezuela, "no reasonable person would conclude" those "were truly statements of fact"

She is admitting then that she is a blatant liar? Perhaps that's the first honest thing she has said in awhile!
citizenschallengev3 March 23, 2021, 1:51am #3

Don’t know about that, but the tactic.

Hell, Trump told the entire nation he was going to screw us, and we still handed the government over to him.

Fact is stranger than fiction.

I wouldn’t be surprised if she gets away with it. That is being a malicious slandering vandal out to destroy people and reputations and fck with our elections.

It certainly does deserve some righteous retribution, no matter whether she calls it’s call a joke or a fraud, people believe the shit and act on it, we have a nation of people who don’t think anymore, they do what they’re signaled to do? We’ll find out just how sacred out election system are considered to be to our judiciary.

If we aren’t changing minds will continue losing and this mental poison needs to be confronted from every possible angle.

Perhaps that’s the first honest thing she has said in awhile! -Write4U

NPR did a story of a nurse who tried to expose a doctor in a small hospital in AZ. He was prescribing medication that only he sold. Some kind of pyramid scheme stuff. His friends. the judge and the hospital board, prevented any consequences. Somehow the nurse managed to get this to a higher judge and it was immediately corrected.

This story is a bit different, since she was lying out in the open. You only need a few legislators to provide a hearing and you look credible, to some people.

Could that be ground work as a defense for the rioters? They weren’t in their right minds as evidenced by their belief that the election was stolen?

I wouldn’t be surprised if Giuliani tries that tactic.

This is as good as Alex Jones admitting his rhetoric is all an act for ratings.

I suggest these people give up their license to practice law and exchange it for membership in the “actors guild”. That way we would know they are never speaking truth, like Bill Maher proposing that Trump’s daddy was an Orangutan. 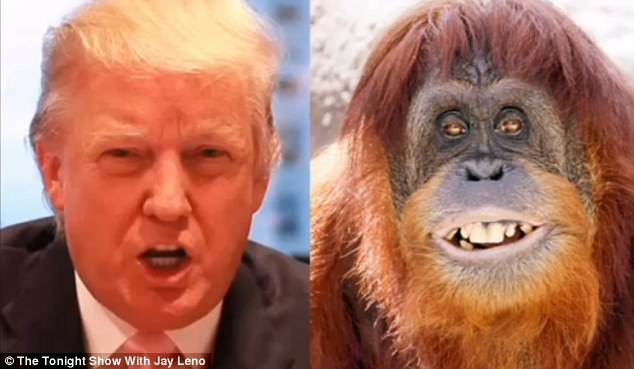 Does Ms Powell’s suggestion that Trump acted in accordance with Law mean it was all a joke and any reasonable person should of course dismiss this ridiculous notion.

That’s an insult to our cousins! The orange creature isn’t a thing like them. He’s a different creature other than ape or any other known animal on earth.

That’s an insult to our cousins! The orange creature isn’t a thing like them. He’s a different creature other than ape or any other known animal on earth.

Don’t I wish that were true

Obviously Trump is an aberration, an evolutionary mutation.

He’s a mutation- a bad mutation.

It’s the evolution of propaganda. It was easy when no one could read. A little harder when you needed to distribute paper copies. Now you can bury the underlying facts under a mountain of lies. If it takes more than 10 minutes to find the facts, most people won’t bother.