Question: Is there a philosophical term for this?

I’ve only just started learning about philosophy, and the terminology is new for me.

In discussing whether humans have “free will” or not … is there a term for limited free will? I have always felt like we make choices, but our options are in parameters limited by our environment, genetics, experiences, etc.

You may be looking for “compatibilist free will”. Which basically considers libertarian free will to be incoherent. And suggests that we are free to the extent that we can choose in accordance with our beliefs, convictions, wants, but we cannot choose what those are.

That is it in a couple of sentences anyway.

There used to be an actual philosopher who would haunt and man this forum and if he hadn’t been around in a while, you could look in a mirror and say “compatibilist free will” 3 times, and he would appear on this forum to answer your questions.

I don’t know if he is still around.

Write4U, Lois, maybe Mriana, CC, and others may recall who I’m talking about. Aside from the mirror joke, he really would show up to engage in long threads about free will, if anyone said the words “compatibilist free will” in a post. He was from a European country, but I don’t recall which one.

I went back in the history of posts on this forum. Some go back to at least 2013. I found his CFI name: GdB

GdB, where are you? A new disciple of compatibilist free will may be awaiting.

His profile shows he is Dutch but was living in Switzerland. He posted as recently as 10 months ago.

I’ll look that up. That may be what I’m thinking. Thanks!!

Okay, @Timb, I checked it out and no.

In compatibilism, there is still universal causal determinism, even though you may choose (one source used the example of jumping into a swimming pool or being pushed in) but a thing still happens.

I just made this very crude drawing of what is inside my head. I have no idea if this is a philisophical concept or not; it’s simply something that occurred to me back in the 1980s! 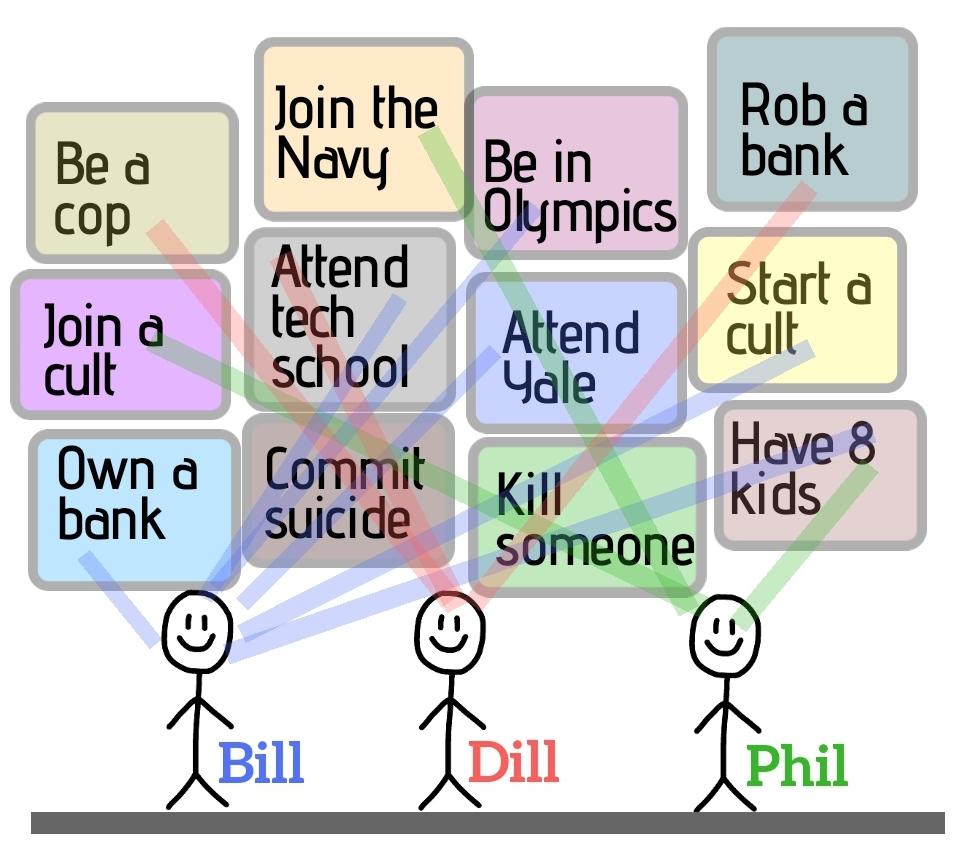 So, we have Bill, Dill and Phil. What will they do in the future?

Bill is an athletic guy with a high IQ, raised in a high-income but dysfunctional home. Because of his IQ and wealth, he has more options than many people do. He may choose to attend a tech school or an Ivy League, he may own a bank, he may compete in the Olympics. He can afford to have lots of kids. But, he might also start a cult or kill himself at 22. He could never rob a bank, however.

Phil is of average intelligence from a lower-class family. His options are fewer. He might join Bill’s cult if Bill starts one. He might have illegitimate kids with 4 women, kill someone in a bar fight or join the Navy and kill someone there. But he can’t go to Yale or own a bank. He’s not smart enough. And he isn’t athletic enough for the Olympics.

All have freedom to make choices, but within certain parameters. The choices they make depend on childhood experiences, biochemistry, what other people come into their life and when, etc. The future isn’t predetermined, but choices are limited.

I went over to the paranormal forum bought some spray and sprayed it all over the place. Hopefully this will keep away those interminable threads.

I can’t say any part of them is “wrong”, but they never end. It was interesting to me once upon a time but then someone asked “what’s the mechanism?” If there is free will, what is willing freely? I can’t answer that without going into science fiction and claiming that something we haven’t discovered moves through multiple universes each time we make a choice. In each of those universes, every action has a natural explanation and the observers in it will never be able to see anything except those natural explanations. They can’t see the consequences of a choice they didn’t make, but in another universe, it plays out and takes everything else with it.

“Free will” can be a philosophical thing, a religious thing, a psychological thing, a physics thing … right? Are these independent of one another?

The term is used by those disciplines, but I don’t know of different definitions of it. It’s the power of the individual to make a decision, using whatever faculties they have, to act according to those faculties, regardless of any outside influence. They can override their hormones, their fears, their doubts, their bad parenting, the lies their teacher told them, and just freely choose.

As I understand it, libertarian free will is almost universally thought of by scholars as being incoherent, i.e., ain’t no such thing.

If you want this perspective to be driven home, a discussion with Lois, on free will, might be in order.