I was going to start a thread “Thoughts on Intellectual Dishonesty” - but my heart ain’t in it just now.

I did get to listen/watch a wonderful talk this evening.

A more pragmatic look at an aspect of some actual factual wonders of our molecular world.

Hell, of our bodies.

If you’ve every been fascinated by DrewBerry videos of molecular machinery in action you’ll probably like this talk.

At about 18:00 he describes some of the technics used to study these molecular machines.

Though he never touches on the molecule soup that these machines move through, it’s still a wonderful amount of info in a half hour.

Speaker Biography: Ron Vale is a Professor of Cellular and Molecular Pharmacology at the University of California, San Francisco and an Investigator of the Howard Hughes Medical Institute. He is also the founder of the iBiology project. Vale received a B.A. degree in biology and chemistry from the University of California, Santa Barbara, and a Ph.D. degree in neuroscience from Stanford University. His graduate and postdoctoral studies at the Marine Biological Laboratory led to the discovery of kinesin, a microtubule-based motor protein.

This stuff has the ring of truth and beauty and wonder.

Molecular motor proteins are fascinating enzymes that power much of the movement performed by living organisms.

In this introductory lecture, I will provide an overview of the motors that move along cytoskeletal tracks (kinesin and dynein which move along microtubules and myosin which moves along actin). The talk first describes the broad spectrum of biological roles that kinesin, dynein and myosin play in cells. The talk then discusses how these nanoscale proteins convert energy from ATP hydrolysis into unidirectional motion and force production, and compares common principles of kinesin and myosin. The talk concludes by discussing the role of motor proteins in disease and how drugs that modulate motor protein activity can treat human disease.

Part 2 discusses recent work from the Vale laboratory and other groups, on the mechanism of movement by dynein, a microtubule motor that is less well understood than kinesin and myosin. The lecture discusses the unusual properties of dynein stepping along microtubules, which have been uncovered using single molecule techniques. The nucleotide-driven structural changes in the dynein motor domain (elucidated by X-ray crystallography and electron microscopy) are also described. A model for dynein movement in the form of an animation is presented. However, much remains to be done in order to understand how this motor works and to test which elements of this model are correct.

The third (last) part of the lecture explains how the movement of mammalian dynein is regulated by other proteins such dynactin and adapter proteins. It also describes the effect of post-translational modifications of tubulin on dynein motility. This talk features the use of single molecule imaging techniques and biochemical reconstitution to study these problems. Unanswered questions on dynein regulation are also presented.

Do you see why I am so intrigued with “microtubules” in relation to “consciousness”? The current answer is that “consciousness” is an emergent property of our neural network, and that is fine as a generality, but no one has really tried to identify how and why this is so.

What are neurons and how do they process and transport “electro-chemical” information? Even saying that synapses are transmitters and receivers is a vague generality, which still does not explain the incredible complexity of the neural networks and what its functional parts are.

IMO, microtubules are the perfect candidate for the self-assembling hardwired information processors which are at the heart of the neural network.

Where there are billions of neurons, inside them there are trillions of nano-scale microtubules. One only has to look at the incredible amount of work microtubules perform and the nanoscale activity inside neurons to realise that here must lie the final answer of emergent consciousness.

IMO, microtubules may even be responsible for viral mitosis. MT are responsible for human cell mitosis (cell division), and as viruses cannot make copies of themselves, they need a mechanism that will do the work for them. Microtubules are built for that very task.!!

Turns out to be quite a rich field that’s over a couple decades old. Most interest.

So what do you think of Dr. Stuart Hameroff’s work. He seems to be the guy giving most the talks.

Microtubules as the cells “on board computer.”

CC-v.3 said; So what do you think of Dr. Stuart Hameroff’s work. He seems to be the guy giving most the talks.

IMO, it is the most fascinating area of research at present. 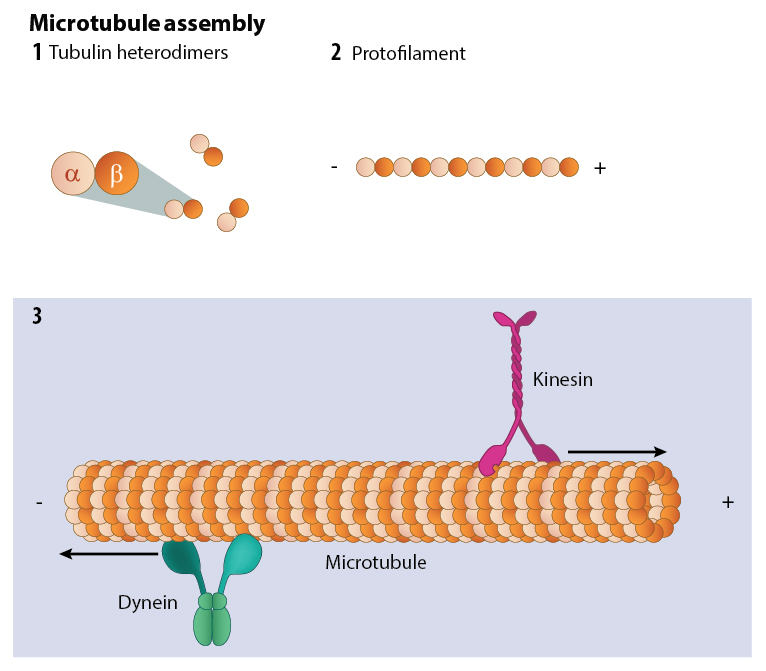 Trillions of nano-scale processors making up our entire neural network in our entire body in every cell and in our brains!

Microtubules provide the spindles used by cells to make exact copies of the DNA during cell division. The are biological 3D printers.

Just start somewhere and use cited references to discover the incredible variety of functions and processes microtubules perform .

The most incredible phenomenon is the fact that they self-assemble and are a "common denominator " in every living Eukariotic organism as well as in some even older Prokaryotic organisms, albeit in a simpler patterns. From bacteria to humans, MT make up the dynamic processors of electro-chemical information which keep us and our symbiotic bacteria alive and functional.

In furtherance of the proposition that the cytoskeleton, the neural network, and specifically the trillions of microtubules therein are critically involved in the processing of data. So much so, that AI consciousness is being explored using carbon based copies of microtubules .

This from a highly recommended science sit;

We explain how memories are created, stored, and retrieved by individual neurons, how objects are recognized, and how neuro-brain-plasticity works with regards to new experiences and learning. Microtubules (MTs) in 'our' neurons act as bio-induction coils that guide nearly everything that goes on in the neuron. The action potential moving up or down a neural axon changes the electric field inside the axon via a magnetic field around the axon and neuron.

As the electric field variation advances in the axon-in time with the action potential-the tubulin proteins in the MTs are forced to fire in a sequence of orchestrated action in a spiral around the MTs in a manner similar to a current in the wire of an induction coil. This induces a relatively strong momentary magnetic field B within the MTs.

As the MT cylinders are long and narrow the field B goes to zero outside (around) the MTs. When this occurs, the induced bio-inductors fire an EM pulse (soliton) resulting in the MT emitting a soliton that resonates with the same length MTs, as well as nearby axons, causing interference patterns between neighboring MTs in the same axon. These interference patterns quantize the nuclear magnetic spins of water molecules for neighboring MTs in a specific pattern that matches the sensation(s) of the external world. That pattern (of magnetic vector potentials is stored in spacetime point-by-point) as a memory. A reverse process recalls these memories.

Einstein recognized that the laws of physics had to appear the same for all observers, stating that observation (itself) is independent of absolute spacetime. As such, when a new incoming pattern is created, it is compared to already existing patterns, initiating recognition. Here, complexity theory can be modeled as an expanding number of quantum mechanical observational measuring systems that are only relatively autonomous as they are all connected by a common observer. Everything in our model of reality is resolved by adopting the 0-D point as the original Riemannian point-element from which our more advanced Riemannian space-time structure of physical reality evolves.

This may also be the basis for Srchoedinger's equation, including how fields of probability arise and collapse. In Bernhard Riemann's original conception of curved spatial surfaces, an n-dimensional space is embedded in an n+1 dimensional manifold wherein all three-dimensional coordinate locations are united. Whenever n = 0, a non-dimensional (0D) point functions as an invariant absence, wherein each 0D point is kept from collapsing back into the Void via a twist.

The neuron is a highly specialized cell whose morphology is thoroughly linked to its function. Microtubules are prominent components of the neuronal cytoskeleton that provide architectural support for axons and dendrites and provide railways to transport cargoes across potentially long distances.

Summary: For AI to be harmless, it must be capable of consciously sharing a commonly sensed intelligence with all sentient life.

We oﬀer a theoretical model of consciousness, requiring conscious awareness of consciousness in a machine, based upon a biomagnetic, quantum back-engineering of the neural net utilizing (in one such test) a series of Josephson junctions and/or carbon-based microtubules. We explain how memories are created, stored, and retrieved by individual neurons, how objects are recognized, and how neuro-brain-plasticity works with regards to new experiences and learning."

AI must be capable of consciously sharing a commonly sensed intelligence with all sentient life.

Can you explain what that sentence is supposed to mean?

Don’t get me wrong I’m not dismissing anything about Microtubules, but I am saying it seems like the talk is outpacing the evidence and tends to be a house of cards, with some cards having no substance, so the structure doesn’t seem particularly solid. People discussing what they hope to find, rather than building on what’s known. Of course, science often tends to work like, then allowing the incoming Physical Evidence to erect guard rails forcing conjecture back inline with actual knowledge. But that takes time.

Me coming at it from the outside looking in and from the ground up, I build up my understanding more like a historian absorbing what’s known, than a pioneer dreaming of all the possibilities.