I’m reading “The Righteous Mind”, about how self-righteousness is innate and might even be helpful to holding society together. In this diagram, he shows how we start with the emotional response, then justify it with reasons. Line #6 is dotted, because it is not so common, it’s self-reflection that rewires your thinking so your emotional response changes. I’ve seen this happen in a bad way, people start believing conspiracies and populism because they can’t work out the data. The good way, and it’s what I consider good, but others may not, is leaving your tribe or your religion and having to work out a new basis of morality. 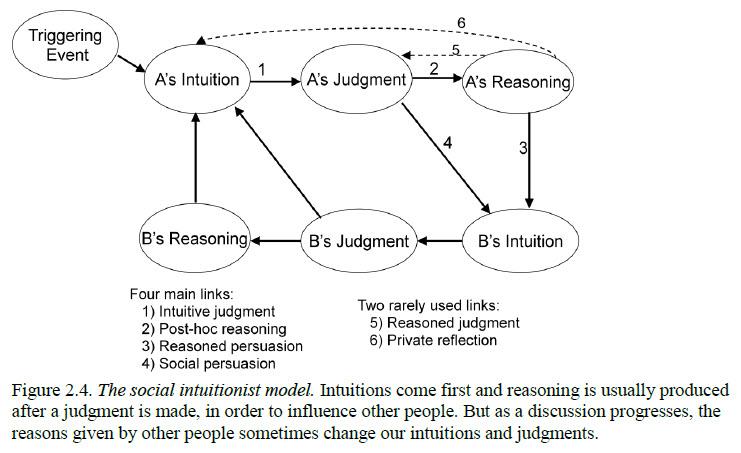 Now there’s a chart to mediate on.

What is it Spock would said,

Be fun to see this batted about by some of you deeper thinkers.

Holy Crap, Mike Yohe actually was on to something. There is a theory in cultural anthropology that early tribes “domesticated themselves”. You would have never found this using what Mike said, because he so misrepresented it, it became unrecognizable. The theory is, early primates and in to early hominid tribes used alpha males to keep order, might made right. But they can be really bad at ruling a group. As weapons developed, strength was no longer the only factor for leadership, denser webs of life developed, and a despotic leader could be taken out. The ability to gain a reputation became as important as being able to win a fight, bringing more genes for reasoning into the gene pool.

This is from Part II, Chapter 8. The Conservative Advantage. There are a lot of online resources for this book, sometimes whole chapters in PDF form and a variety of extensive notes on blogs and other formats. This is an article referencing the guy, Boehm, that is referenced in this chapter.

The theory is, early primates and in to early hominid tribes used alpha males to keep order, might made right. But they can be really bad at ruling a group. As weapons developed, strength was no longer the only factor for leadership, denser webs of life developed, and a despotic leader could be taken out. The ability to gain a reputation became as important as being able to win a fight, bringing more genes for reasoning into the gene pool.

IMO, the only hominid tribes which attained true civilized behavior are the Bonobo. They are matriachies and females rule by forbidding violence and rewarding good behavior with sexual favors. This seems to be very effective as there are no reports of a Bonobo ever having killed another Bonobo, whereas Chimpanzees are renowned for violent behavior and even murder.

Moreover, the close social relationships among Bonobos helps in cooperative behavior and in test it was observed that Bonobos as a group would solve various problems much faster that Chimpanzees, who usually haggled more about dominance that offering cooperation.

This may be an interesting peek at Bonobo behavior.

Okay here’s the description of that video up there:

Part 1 of 4. Footage about Kanzi, at the GSU Language Research Center from NHK Japan Broadcast Corporation for a special they subsequently produced called Kanzi: An Ape of Genius (English version) narrated by Dr. Sue Savage-Rumbaugh. From about 1993.

That one’s too short.

National Geographic - June 16, 2014
Bonobos are the only ape that doesn’t kill. And unlike any other ape, bonobos help each other out (a lot like humans do). Through the use of “bonobo TV,” researchers found that bonobos’ yawns are contagious (also like humans). But while they have humanlike traits, their biggest threat comes from humans.

I started yawning, just from them talking about contagious yawning.

The book has a lot of data backing up what he says and he let’s you know when he’s speculating and when there is counter evidence to his ideas. So, I can’t just put up pithy quotes that summarize everything. One quote he uses (I forget the source), to make a point about the difference between us and our primate relatives is, you’ll never see two chimpanzees working together to carry a log. As much as we resemble them with our hierarchical behaviors, we get non-kin to cooperate in ways no other animals do.

Bonobos are probably better than Chimps on cooperation.

Yep, but those experiments are always about one of them performing some task that benefits others and how they react after seeing that, stuff like that. They can even teach each other to do things through observation. But, although they easily could, they don’t initiate a simple coordinated effort like holding something while another lifts the other end.

Interesting. I imagine that Bonobos could be taught to do coordinated actions like that. But it seems significant that they don’t do it naturally.

The thing about a social task like that, is it could take some communication skill that they don’t have. If a fellow Bonobo is pulling on a log, I might be curious, but I might also consider that it was apparently important to my friend and I would not want to interfere with whatever he was doing. He doesn’t know how to ask me for help moving a log. I don’t know how to ask him if he wants help.

I bet that behavior analysts, if there are any who work with Bonobo groups, could individually teach them to ask for assistance from one another, at least in specific tasks. With enough tasks in which asking for assistance was learned, the skill might eventually generalize. Maybe they could, subsequently, even learn this skill from other bonobos.

Then there would be a bonobo culture in which bonobos are particularly cooperative, until the skill was lost to the culture, due to death of those who had the skill or other group disruption in which the skill could not be passed on.

It might be something missing in their ability to reason and/or communicate that prevents them from cooperating more.

The benefits of cooperation are huge, so there’s definitely an evolutionary advantage to doing it. So the fact they don’t might mean they can’t (or at least can’t do it well enough for it to be a significant part of their society.

It’s odd that they are so incredibly social yet can’t share in the doing of simple tasks. I bet there’s more to it than a simple failure to communicate.

Well they did not have group predation in their phylogenetic background (like we did as hunters where cooperative communication was a major advantage in survival, with some prey).

Bonobos are very generous. They welcome strangers in their camps and offer food and sex.

When food is in abundance, Bonobos allow several other species of ape, monkeys, and grazers to roam freely among them.

Even when imprisoned they will release other inmates and share food with them.

Holy Crap, Mike Yohe actually was on to something.

This is an acceptable hypotenuse that works with acceptable facts. It is quite dated in that its perimeters used accepted data that man came out of Africa 40K ago and that the cradle of civilization was Mesopotamia. And that the tree of Homo sapiens was complete.

Of course, my posting did not fit these facts. The out of Africa alone blew my postings apart. Where you seem to take one subject matter and play with the logic within. You do not put that subject matter in a timeline and view all the subject matters on the timeline to see if they fit and work together.

The simplest items are items we use daily. Like vegetables, nuts and grains. Such everyday basic items should be well known and thoroughly understood in all aspects of the when, where and whys.

The facts are that they are not understood at all. The posting right now is covering early man and DNA and the connection to apes. Yet, if you look at the DNA there are two branches of ancient humans that make up the DNA of Homo Sapiens that are still waiting to be discovered. This in itself, has the possibility of blowing your cultural anthropology theory right out of the water.

The Out of Africa hypotenuse has been moving from 40K to 300K now. That fits well inside of my postings now. The Mesopotamia as the cradle has been abandon as the cradle of civilization with no apologies from the scholars. Again, works with my posting out of India.

The most interesting part of our past history is the fact that all religions have a common factor. They zero in on the items from the upper and lower gods. An example, when Islam was being put together they tried to use some of the knowledge of the upper and lower gods to build their new religion. They were unable to move the data in a useful format because of the complexity of the system used by the upper gods. They instead went with Jesus.

History is interesting and the good part is new discoveries are now a weekly occurrence.

Point being. Yes, I agree with your early hominid tribe theory. But that is outside of the parameters of my posting. My thinking is the Age of Domestication took place with people as smart or smarter than you and me.

Of course, my posting did not fit these facts. -- Mike

Well, we agree so far. Doesn’t really matter what posting you are talking about.

Yet, if you look at the DNA there are two branches of ancient humans that make up the DNA of Homo Sapiens that are still waiting to be discovered.

But not for long. How can there be a branch that isn't discovered?

They instead went with Jesus.

Before we had books and teachers we had intuition accumulated over a very long time from curiosity. We often reach into our intuition for decision making thought unconsciously when we need to supplement our contemporary knowledge.