In which a "journalist" punks Christianity!!

punked verb To get punked is to have a joke played on you, often in a public setting.

Okay, this podcast has nothing to do with religion, but this EPISODE of the podcast does.

I just happened across Episode 26, randomly, listening to old episodes of this show I’d missed… and I literally laughed until I was choking. OMG!!! 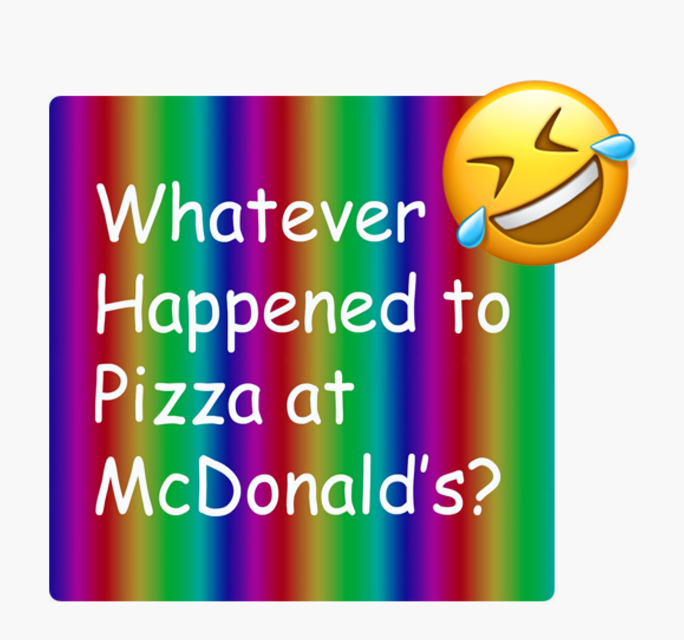 You have to appreciate a certain type of humor: deadpan satire.

For two years, LA comedian Brian Thompson has been pretending to be a journalist investigating the question of why McDonald’s served pizza in the 1990s and then stopped.

He approaches it as if it were the most pressing issue in American history, and as if he were the most important journalist. He has punked McDonald’s Corporate, the FBI, the CIA, Mar-A-Lago, etc.

This isn’t mean punking, like in “Borat.” He doesn’t humiliate people. The humor comes in because he approaches every topic as if it is brand new, the first anyone has ever heard of it. So really, he is punking journalists (which is why I love it so much).

In this episode (20 minutes long) he calls a prayer line, and acts as if he has NEVER heard about Christianity before.

The best part is when he becomes “born again” at the end. Well, sorta.

Whatever Happened to Pizza at McDonald’s| Episode 26

Okay, I know nobody is following this, but I don’t care.

I just listened to the next episode, and this time he calls a Catholic prayer line, because he isn’t sure the Protestant guy from yesterday knew what he was doing. ???

Actually, it’s clear he has some knowledge about theology, because he knows exactly what incredibly stupid questions to ask in order to point out their stupid differences.

Hilarious. Will he call a mosque next? I have no idea. But I don’t know how he can do this without cracking up. I do Improv, and that is a skill I still have to improve.

Whatever Happened to Pizza at McDonald’s

I can’t go to the website at work. Maybe tonight I’ll listen to the podcasts.

I love pranks like this if they’re done well.

If you appreciate this type of humor, yeah … you want to hear this.

Here is a good piece on the podcast. As of now, he is up to 137 episodes: but many are only 5 minutes long or so.

Much of that is the intro and his sponsors. But that is kind of the joke, too (you’ll see). Once I started getting into it, I just skip the first and last minute or so and listen to a few at a time.

But probably not tonight either. Maybe tomorrow.