Well, that did it. If I reply to Mike, it does not show. So I reply to him through you.

Thatone, you know that all the other First World nations have the same rates of mental illness as the US, right?

That people with mental illness are more likely to commit suicide or be victimized than they are to commit a violent crime?

That the majority of mass shooters have not been diagnosed with a severe mental illness before the event, and very few were able to get an insanity defense?

I start with them because they were the first generation to be linked with mass shootings back in the 90s.

By what metric then? Gun ownership has steadily gone up. Gun purchasing too. Private sales, up. Mail order of guns, easier. What has gone down? By what measure are guns less available?
player August 9, 2019, 8:49pm #24

Tee bryan - no mention of right wing neoliberal ideology from you??

How subservient of you to do so.

How about we only allow licensed gun owners to potentially be part of the well regulated militia, that our forefathers prefaced as the reason for the right to bear arms? IOW you get a gun ownership license, that can be revoked for reasons similar to having a driver’s license revoked. You must periodically update your gun license, as you do your driver’s license.

As much sense as that makes, it will probably not fly.

Tee bryan – no mention of right wing neoliberal ideology from you??

How subservient of you to do so.

I’m not sure what this even means, Player.

Here’s what would make sense instead of banning everyone with a mental health issue: Have each potential gun owner down a 6 pack of beer in 15 minutes. If they are an ANGRY drunk, they don’t get to own a gun.

For your eductional development

That is a good article for ppl to pay attention to. Some on Fox News would have us believe that there is no such thing as White Supremacy (or Russian meddling either for that matter).

All true. The Russians got Trump elected, resulting in more “mass shootings” (because Tump’s racist rhetoric has emboldened the domestic white terrorist types), “pulling out of iran deal” (Yep Trump did that. He also pulled out of TPP which would have helped us deal with China, instead of having an unending tariff war), “de- regulation” (oh yeah Trump never saw a consumer protection or a climate protection regulation that he would not destroy), and “no wage rise” (that would be the Trump tax cut for the wealthy corporations and the exploitative rich, which did not help regular wage earners but just further enlarged the wealth disparities).

They got Trump elected and thus f’ed the US over big time. And why wouldn’t they? That’s not hard to figure out. What is more mysterious is why Russian meddling deniers like you would so steadfastly help them.

Yeah if only trump wasnt around things would be dandy. Those wages would be right up there

If Trump were not around things WOULD be relatively dandy, no doubt about that. And as far as wages, Trump says that our economy is the best in history. He promised there would be so much winning we would get tired of it. But wages have barely gone up at all. The gigantic tax cut that he got passed could have easily been structured to promote wage increases, but it was structured, instead, to help the rich get richer. That tactic is the exact one that Ioannis described as one that the right would use in moving us toward Fascism. And Trump did it! Did you even listen to the post u put up about Crisis in Capitalism?

Dammit. You should be ashamed to call yourself a progressive.

Hey stupid. Have real wages risen over the last 30 years in the US? WTF is wrong with your brain?? 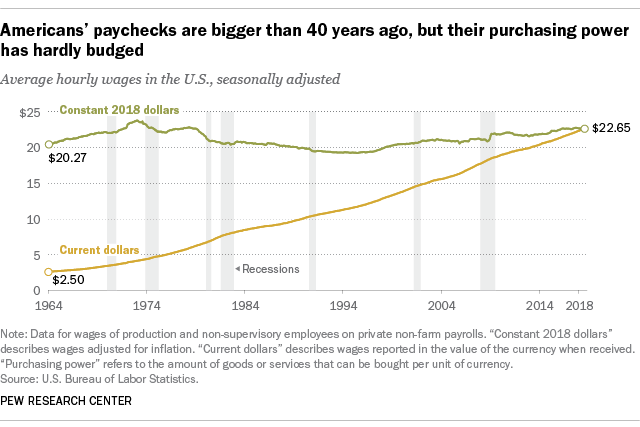 If you like that, you’ll like this piece I wrote, which puts that into context. For those not familiar, Quora is a question-and-answer forum. Anyone can post questions, and writers answer them. If readers think an answer is particularly good, they “upvote” it (sort of like a “like,” but more of an endorsement).

A) @TimB points out that wages haven’t exactly gone sky-high under Trump, and chides Player for being a bad Progressive for supporting him

B) @Player snaps back, calling him stupid and asks rhetorically whether real wages have increased in the last 30 years (I think we know that the answer is “no”)

C) @Write4U responds by posting the chart that confirms this is the case.

What are we fighting about? Player, is your point that Tim’s criticism of Trump is unfair, since real wages have been stagnant for so long, Trump can’t be blamed? If so, I don’t think that was Tim’s point. I believe Tim’s point was that Trump’s constanr touting of the economy being the best in history is wildly exaggerated.

Tee - so then. Do you agree with me with real wages as the metric, Trump is not THE problem?

“The idea that morality has decreased, and people are becoming more and more violent over time, is simply false.”

You got two points here. Morality decreasing. And people becoming more violent. Are you trying to connect the two?

Morality is measured by rules of laws needed and the growth of a caste system. Really simple. You measure a civilization’s violent by your levels of freedom. Also, not that hard. The pathway of a gun debate is a plethora profusion of arguments with no end in sight without setting some parameters. Life is to short, let’s keep it simple.

When God’s 613 laws are debated, there are moral reasonings for the laws. Jesus saw problems as to how the interpretation and the judging of the laws were being done and the caste that was applied to the scribes and judges. Thus, he wanted changes in the system and to have the morals of the laws better explained.

A look at the timeline. There were some Orthodox Christians who taught gnosis (Knowledge of the God or the Good) who could be called gnostics in a positive sense (e.g. Diadochos of Photiki). Gnosticism may have been earlier than the 1st century, thus predating Jesus Christ. Jesus picked up this movement to use for the new upcoming government of Israel combined with Hellenic philosophy and controlled by the Roman Empire. Jesus’ ideas spread through the Mediterranean and Middle East before and during the 2nd and 3rd centuries, becoming a dualistic heresy to Judaism. And then reappeared in the 19th and 20th centuries in Europe and North America. The term god as knowledge had a church modification to deity. But was still able to make it into the Constitution of America under Jesus’ gnostic thinking as knowledge before being covered up again by the Christian movement in the 1860’s.

As I believe in the constitution. I also understand that the constitution is just part of our civilization’s government and that our founding fathers never did get the government completely finished. The last part was the morality of the people. Jefferson looked at several systems of morals that had been successfully used in the past and he concluded that the bible worked the best for teaching morals. He just could not use the deity in the bible. My understanding is that Jefferson hoped that knowledge would expand, and the deity would be seen by future Americans as friction.

Now there should be no misunderstanding as where my viewpoints are coming from. Religion and morals are for civilizations. Our system was built on the best ideas and what worked going back before the written word. To think we know better than what thousands of years of trial by error has given us is not logical. It is our inheritance, why not use it. Past religion was the wisdom to understand how to use the knowledge of laws to live by.

History has shown that laws have shown to work the best for civilizations when people understood the laws and had good morals. The bible is nothing more than the morals that go with the laws of god. You could say that laws need good morals too.

Where are the morals to be used for the gun laws? They are not in the 97,000 pages of text.

So really, what you are doing in debating gun laws is nothing more than putting your moral reasoning on the gun laws? Which is fine and makes for a good debate.

Point being, labeling and political smearing are personal forms of low morals and to have a debate that covers morals. One should have good morals.

I don’t agree with your assumption on school prayer. I am an atheist. I have no problem with corporal punishment up to the second grade. I don’t agree that methylphenidate and amphetamines work better and are better for the child. And I eat beef too. So, don’t compare your drugged kids with my kids, OK!

Let’s set the parameters to guns or schooling. You know, keep it simple. Or we could debate the morality, which would be my choice because I see it as a root problem to a lot of issues bothering us today.

Note; No one knows how many laws there are in the United States today. Apparently, no one can count that high. There are about 20,000 laws just governing the use and ownership of guns. New laws mean new crimes. Regulations are laws and there could be 300,000 regulations in force today. It’s not fiscally sustainable, it’s not serving the public interest by overburdening our societal building blocks–like the family unit–by haphazardly adding to our onerous criminal code.

Do you agree with me with real wages as the metric, Trump is not THE problem?

Have you ever heard of the old joke where a witness is asked, “When did you quit beating your wife?” Assuming one has NOT beat his wife, the question can’t be answered without denying the question.

Your question here is like that. Did I SAY that I blame Trump for wages not being higher? No. I’m criticizing his false narrative that wages have increased wildly under his Presidency.

I can SORT OF answer your question by saying I think Trump could be doing more. If the economy is as amazing as he claims, then he should not be trailing BEHIND where Obama was, in job creation.