If we humans or even our future AI or our evolved future progeny ever develop time travel, wouldn’t they have visited our time, at least occasionally, during our currently recorded history? If they have, we have no sure evidence of it. Maybe they have, and it immediately wiped out their timeline. Maybe they have, but have been completely discreet about it. Maybe they could, but haven’t, because it’s a really bad idea. Or maybe time travel is just beyond homo-sapiens and their progeny to ever achieve.

Maybe, since we’d have to discover how to travel through time a first time, we are on the initial run right now. In the future, after we know how, then we could travel back and bother our ancestors a first time. That would mean that we will exist again to experience the first time someone travels back to our time. But then this would lead to an infinite number of run-throughs of our lives to experience each new time someone travels back to visit us.

This is one of those topics that is fun to think about for a bit, then it starts to hurt your brain.

I don’t get it. If we learn to time travel for the 1st time next year, and travel back to now, how come our next year selves are not here already?

Oh, wait, here I am. Oooh, must be a tuff upcoming year.

That’s the paradox. Assume someone invents a time machine a hundred years from now. As time goes on and more machines are built, there would be more and more time travelers visiting the past (our present). There would be no way that we wouldn’t encounter one every now and then. Oh wait, you say – there’s a government agency that strictly monitors time travel and polices it so that such meetings never take place. Then we’d be meeting up with those agents every now and then. And you’re saying they never make mistakes? Seriously? Remember we’re talking about a theoretically infinite future full of time travelers. (See Isaac Asimov’s novel “The End of Eternity”)

Of course there are websites which claim that we ARE encountering time travelers from time to time (ha-ha). They dig up old, old pictures with people wearing odd shirts or holding a hand up against the sides of their faces and claim these people are using cell phones, or things like that. They can be pretty amusing. 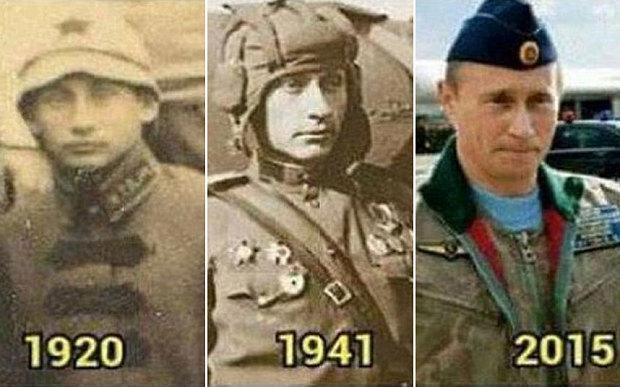 These pictures show Putin has traveled in time. He even, at some point, goes thru gender reassignment transition and travels back in time to pose for the Mona Lisa. 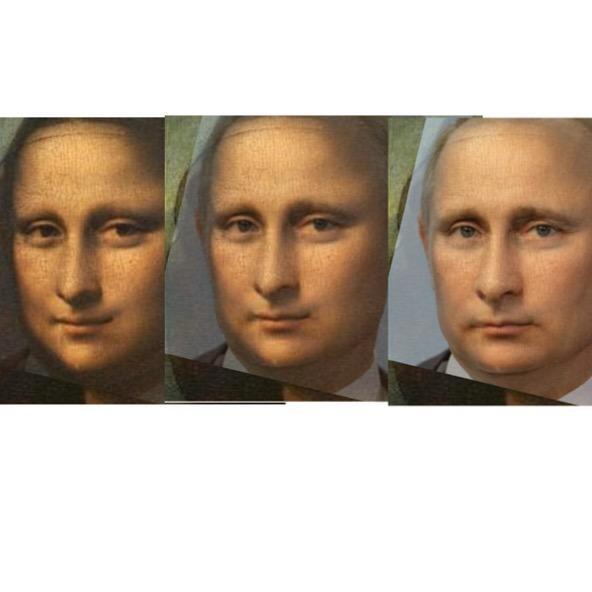 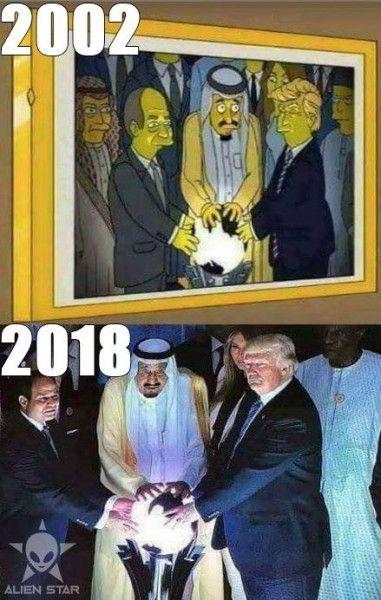 Oh my goodness. This is funny, but if the Simpson cartoonists predicted it 12 yrs before it happened, WTF? (seriously spooky) The only thing they got wrong was the black guy standing behind Trump in the picture, is a white guy in the cartoon; and one other background guy was a suit wearer instead of a Turban and robe wearer. This seems to be proof that Simpsons cartoonists can time travel.

There are only so many faces when you think about it. I once bought a copy of Sir Thomas More’s “Utopia”, and the portrait of More on the cover is the spitting image of my nephew, Robbie.

Think about how the invention of the airplane changed the world. There’s hardly any place on Earth that doesn’t have an airport, and as soon as you get airports you get hotels, you get tourist resorts, you get McDonalds and Burger King, everywhere. What the airplane did to culture the time machine would do to history, if such a thing existed.

Are the Simpsons picture and the photo of Trump actually unmodified versions from 2002 and 2018 respectively?

The globe that their hands are on is in the same orientation, Melania is in the same location in both (yet she didn’t marry the Dumpster until 2005 [I just did 10 seconds of research]), and even their body positions and how the light is hitting them is the same.

I have no idea if the globe they’re fondling is a well-known item that is used like this fairly regularly, so maybe it’s not quite as unlikely as it seems at first.

Does anyone have background on this eerie coincidence?

I shall sleep well tonight.

Here is a video from the future, courtesy of AOC.

Actually think about like god, and ancient interpretations of aliens. Those could have been time travelers from a bery afvanced future. Maybe the first couple times where sloppy and led to those divines being seen.

I don’t think the little grey guys with the big black eyes, actually exist, but I have often thought, if they did, why must they be from another planet in the galaxy? Could they not be from our own distant future, i.e., what we humans eventually become?

“Bart to the Future,” the episode of “The Simpsons” that first aired March 19, 2000, depicted Lisa as the first woman POTUS. She’s cleaning up the economic damage caused by the previous President – Donald Trump.

And I love the paradoxes and the hypotheticals.

Haven’t some physicists claimed it’s theoretically possible? In one direction? I forget which one.

So would anyone go back in their own lifetime & change anything? I would.

Steve Miller kind of looks like a younger Putin. It would be genius to work with his younger self to undermine American democracy.

Widdershins. You just made me shudder inside. It is almost too intensely diabolically insidious to contemplate. Putin prime (who we know as Putin) would have to have arranged his younger self to be retrieved to our present, some years back, and developed the history and background necessary to take on his current day persona (of Steven Miller). Iow he was a sleeper for an earlier period of time. But now, he is a major asset and spy in the Whitehouse for his older self (Putin).

But I have an idea. We go back to what 1968? and retrieve Robert Kennedy from the past at a point just before he died.

We convince him to continue the primary campaigning that got him killed but to do so as a candidate for the Dem Nomination for 2020. He runs away with it and goes against T_rump in the general election and wins. Then Robert stands down Putin for the little bitch that he is. Steven Miller is captured and sent 100 years into the future, where it is hoped that they will have, by then, developed a cure for whatever malady of evil that infects such a person.

I would go back in time and change things, I suppose.

However, there is a horror genre now, it seems, where someone travels back in time, changes some bad thing that happened, but when they get back to their own time, things are much worse, in some way, so he goes back again, to correct that mistake, but, you guessed it - each time he gets back things are even much worse, so that he is compelled to go back, etc.

Time must exist for time travel to be possible.

Also, while we view time as a linear event, it may be more complex than simply forward, backward, observer in the middle.

Time must exist for time travel to be possible.

Explain this statement, please. Are you suggesting that time does not exist? Because I totally think that time doesn't exist in the same way that "distance" doesn't exist. Both are simply measurements, not actual "things".
spill November 22, 2019, 10:47pm #20

Right, we view time as a unit of measure.