Has anyone read the pale blue dot? Would anyone recommend it? and also why?

I love the way Carl explains things in such a simple way:
Best of Carl Sagan on Religion - YouTube

Do you mean the poem? I’ve heard his own reading of it a few times. A great expression of our limited time on earth

The Pale Blue Dot is one of Carl Sagon’s books and is also in audio published in 1974 - I’ve heard Richard Dawkins quote Carl Sagan quite a lot. Their talks are fairly similar from what I’ve heard so far as well especially when its about religion and the start of the universe and creation - Carl was astrophysics whereas Richard was biology of course.

The Pale Blue Dot is one of Carl Sagon’s books and is also in audio published in 1974 - I’ve heard Richard Dawkins quote Carl Sagan quite a lot.

Yeah, but . . .
The first Pale Blue Dot is what Earth looks like from beyond Pluto (If I’m remembering it correctly), as viewed by the Voyager One space craft. 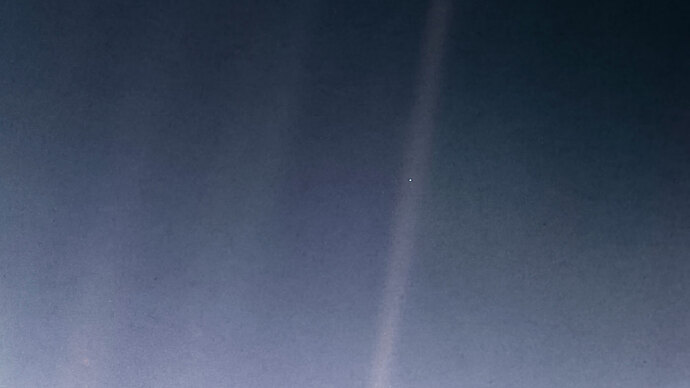 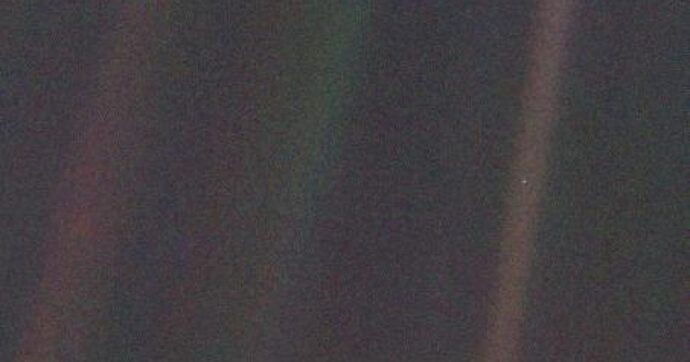 The Pale Blue Dot of Earth

This image of Earth is one of 60 frames taken by the Voyager 1 spacecraft on February 14, 1990 from a distance of more than 6 billion kilometers (4 billion miles) and about 32 degrees above the ecliptic plane. In the image the Earth is a mere point...

Look again at that dot. That’s here. That’s home. That’s us. On it everyone you love, everyone you know, everyone you ever heard of, every human being who ever was, lived out their lives. The aggregate of our joy and suffering, thousands of confident religions, ideologies, and economic doctrines, every hunter and forager, every hero and coward, every creator and destroyer of civilization, every king and peasant, every young couple in love, every mother and father, hopeful child, inventor and explorer, every teacher of morals, every corrupt politician, every “superstar,” every “supreme leader,” every saint and sinner in the history of our species lived there–on a mote of dust suspended in a sunbeam.

The Earth is a very small stage in a vast cosmic arena. Think of the rivers of blood spilled by all those generals and emperors so that, in glory and triumph, they could become the momentary masters of a fraction of a dot. Think of the endless cruelties visited by the inhabitants of one corner of this pixel on the scarcely distinguishable inhabitants of some other corner, how frequent their misunderstandings, how eager they are to kill one another, how fervent their hatreds.

Our posturings, our imagined self-importance, the delusion that we have some privileged position in the Universe, are challenged by this point of pale light. Our planet is a lonely speck in the great enveloping cosmic dark. In our obscurity, in all this vastness, there is no hint that help will come from elsewhere to save us from ourselves.

The Earth is the only world known so far to harbor life. There is nowhere else, at least in the near future, to which our species could migrate. Visit, yes. Settle, not yet. Like it or not, for the moment the Earth is where we make our stand.

It has been said that astronomy is a humbling and character-building experience. There is perhaps no better demonstration of the folly of human conceits than this distant image of our tiny world. To me, it underscores our responsibility to deal more kindly with one another, and to preserve and cherish the pale blue dot, the only home we’ve ever known.

I tossed that in for background, I remember the picture being published and effort Sagan had to go through to get NASA to agree to it’s important and turn the craft around for that one image before, getting back to it voyage of discovery in the outer reaches of our Solar System. For some, such as myself, it was and remains an incredible moving image once you spend a little time musing on what we are looking at and from where it was taken.

not as sexy as the other heart stopper of it’s day, still impressive for those who care: 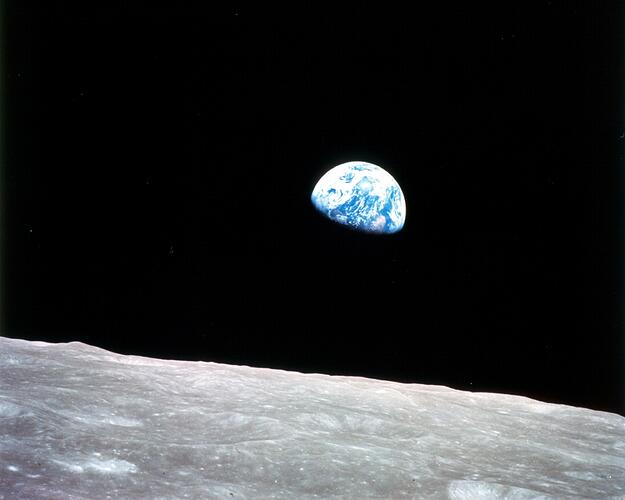 I actually appreciate the picture of Earth from near Pluto more - I see that picture from the distance of the moon so much on TV etc… that I’m almost de-sensitised to what is means - I have to consciously remind myself that if that planet is destroyed then all human-kind would be extinguished instantly (except maybe for the few humans on space stations or stuck in orbit).

I actually appreciate the picture of Earth from near Pluto more - I see that picture from the distance of the moon so much on TV etc… that I’m almost de-sensitised to what is means - I have to consciously remind myself that if that planet is destroyed then all human-kind would be extinguished instantly (except maybe for the few humans on space stations or stuck in orbit).

Ah yeah. A good example of how we are product of our surroundings and upbringing.

I was five years old in the summer of 1960. Parents already interested in things, back when I literally sat on my grandma lap, a very religious one, yet, she’d read from an outdated series of encyclopedia articles about Wegener and his wild theory, Leaky’s searching for ancient humans, dinosaurs, lands yet to be explored. At night the mystery of the moon and stars, and it was all one massive mystery after another. Encyclopedias that were full of unanswered questions, but the beginning of serious data collection. I knew and wondered about the moon in the same way ancients did, that unattainable orb, what is it?

I was plugged into the race to the moon before I was ten. I was among those who watched those first steps in real time and like the death of a person closes the last page of their life, with a resounding finality, so too I felt the shift, now we knew, now we had stepped a foot on the moon. I mean at 5, man on the moon was still a total impossibility in the minds of most people alive. Now at fourteen I was avidly watching the incredible event unfold as a ripple raced throughout humanity. Looking at the moon that night was different, and it would never be the same. And you’re sick and tired of the old people like me going on about it, like we were of the old WW2 warrior worship we got tired of hearing about.

Still, it was such a gift,( that’s taken 60+ years to fully appreciate) the importance of being inoculated by the feeling of awe and curiosity and yearning desire to know. To be aware of emotional feel of the ageless sense of frustration at mysteries unsolved, that once surround all fields of science, and to get fired up wanting to find out.

I’m an engaged high school graduate who’s had a front row seat to one scientific revolution after another since graduating in '73. Just as I will never understand today’s obsession with superficiality and stuff that seems to have possessed our entire society, the Haves spend and waste like … and the Have-nots seem obsessed with wishing they could.

{For the record my current state of mind is very much influenced by visiting and helping caretake my splendid, beautiful, fun, exhausting, satisfying, grandsons (2, 3 2/3s) far from my home in the land of oz.}

(except maybe for the few humans on space stations or stuck in orbit).

Ah, but those space stations depend on us supplying them.

In the long run, we’re all in this together.

Yeah it would be a horrible death for any survivors on a space station - it would be like Space Odyssey 2001 ?!? where the last survivor just floats off into space eventually to be starved of oxygen I imagine. Even if they could get an infinite supply of basic essentials I guess that their muscles would deplete so much due a lack of gravity effect. They’d somehow need to risk porting over to Mars somehow for any chance of finding another planet?!?!

I saw the movie once and enjoyed it. Would love to read the book.

For thos who have not yet seen this well-made sci-fi movie, it is avalable for free (w/ads) on YouTube

Probably the 1968 one. I didn’t even know there was a remake of Space Odyssey. I really get sick of remakes. They’re never as good as the original or I’m biased or both. However, I was talking about Pale Blue Dot.