Sad day for astronomy - Arecibo Observatory is down and to be scrapped.

I suspect lack of attention to maintenance, slip shot maintenance, budgetary pressures and maintenance postponements, could well be at the heart of this.

And I always wondered about how the Arecibo Observatory would hold out, it was such an audacious plan, and built it and it’s worked well for decades. I worried about hurricanes tearing it up, who thought a rusted cable would do it, or was it the anchor point that gave way?

NOVEMBER 19, 2020 AT 6:29 PM
Arecibo’s days are done. After two support cables failed in recent months, the radio observatory’s 305-meter-wide dish is damaged beyond repair, the National Science Foundation announced on November 19. It will be decommissioned and dismantled.

“It’s a death in the family,” says astronomer Martha Haynes of Cornell University, who has used the telescope in Puerto Rico to study hydrogen in the universe since she was fresh out of college in 1973. “For those of us who use Arecibo and had hoped to use it in the future, it’s a disaster.”

The NSF and the University of Central Florida, which manages the telescope, had plans to repair the cable, Haynes said. But then a second cable unexpectedly broke on November 6. If a third cable were to break, it could send the platform holding up the dome swinging, or the whole structure could collapse. 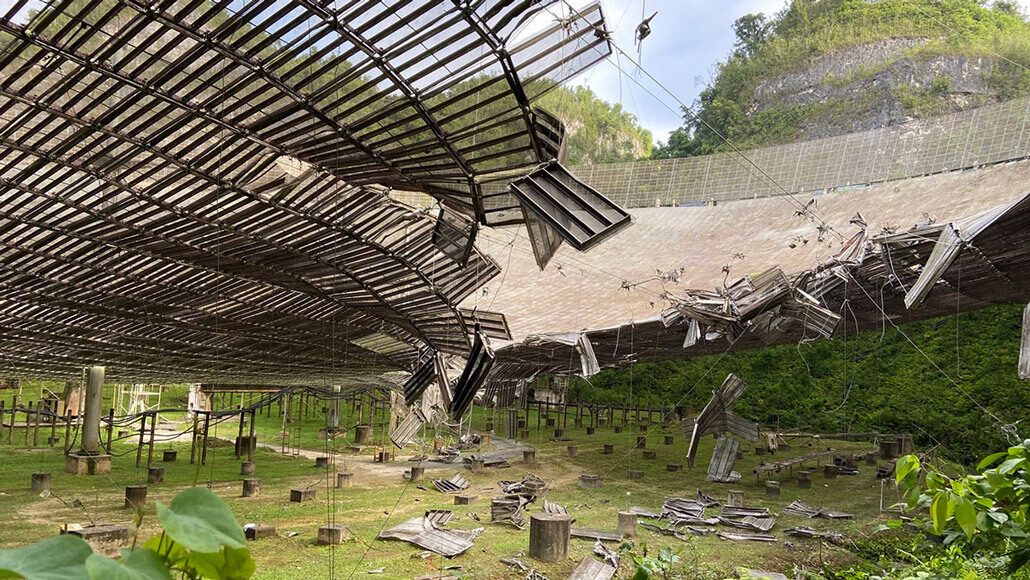 A second cable broke in November, prompting the observatory to close permanently over safety concerns.

The Arecibo Observatory is a radio telescope in Arecibo, Puerto Rico, and part of the National Astronomy and Ionosphere Center (NAIC). The observatory consists of a 305 m (1,000 ft) spherical reflector dish built into a natural sinkhole, a cable-mount steerable receiver mounted 150 m (492 ft) above the dish, and several radar transmitters for emitting signals. For more than 50 years, the Arecibo Observatory was the world’s largest single-aperture telescope, surpassed in July 2016 by the Five hundred meter Aperture Spherical Telescope (FAST) in China.

Arecibo was primarily used for research in radio astronomy, atmospheric science, and radar astronomy, as well as for programs that search for extraterrestrial intelligence (SETI). Scientists wanting to use the observatory submitted proposals that were evaluated by an independent scientific board. The observatory, funded primarily by the National Science Foundation (NSF) with partial support from NASA, was managed by Cornell University from its completion in 1963 until 2011, after which it was transferred to a partnership led by SRI International. As of 2018, a consortium led by the University of Central Florida has operated the facility.

Since 2006, the NSF has reduced its funding commitment to the Observatory, leading academics to push for additional funding support to continue its programs. The observatory was damaged by Hurricane Maria in 2017 and was affected by earthquakes in 2019 and 2020. Two cable breaks, one in August 2020 and a second in November 2020, threatened the structural integrity of the support structure for the suspended platform and damaged the dish. Due to uncertainty about the strength of the other cables holding up the structure, and the risk of collapse due to further failures making repairs dangerous, the NSF announced on November 19, 2020 that it would decommission and dismantle the telescope, while other facilities at the observatory would continue operating.[6][7]

The observatory was built between mid-1960 and November 1963. William E. Gordon of Cornell University oversaw its design for study of the Earth’s ionosphere.[15][16][17][18] He was attracted to the sinkholes in the karst regions of Puerto Rico that offered perfect cavities for a very large dish.[19][20][21] Originally, a fixed parabolic reflector was envisioned, pointing in a fixed direction with a 150 m (492 ft) tower to hold equipment at the focus.

The Astronomical Sciences and Atmospheric Sciences divisions of the NSF had financially supported Arecibo since its completion in the 1970s, with incremental support by NASA, for operating the planetary radar.[32] Between 2001 and 2006, NASA decreased, then eliminated, its support of the planetary radar.[33]

A November 2006 report by the Astronomical Sciences division recommended substantially decreased astronomy funding for the Arecibo Observatory, from US$10.5 million in 2007 to US$4.0 million in 2011. The report further stated that if other sources of funding could not be found, closure of the Observatory was recommended.[34][35]

Guess it may have been a bit like that left over dinner you keep pushing to the back of the fridge until it’s so rotten, so don’t feel guilty tossing it out. It’s fractals all the way down

there is a memo from an engineer somewhere listing the maintenance that was needed, in order of most dire to least

Seems that plenty were well aware of the aging - just the will and treasure was lacking to keep up on maintenance.

Sad day, but hey there happened to be drone on hand to catch the grizzle moment. Sort of reminds me of what we are doing to our global society, one strand at a time, no worries, then pop, bang, boom leaving only the dust to settle.

The collapse was on Tuesday morning, but yesterday the NSF made video of the catastrophic collapse available, and so many viewers asked I continue my long tradition of ‘coping by analyzing failure’ and document what I see in this footage. It’s hard to watch because this magnificent structure has always been part of the world of astronomy for me.

This thing was completed in 1963 and it was mind-blowing to a little kid who loved paging through my brother’s Science Illustrated and Popular Mechanics magazines, so in a weird way I’m finding it personal, like losing a beloved pet or something.
citizenschallengev3 December 5, 2020, 9:50am #5

“The loss of Arecibo is a big loss for the community,” says Tony Beasley, director of the National Radio Astronomy Observatory in Charlottesville, Va. “The life cycle of Arecibo was really quite remarkable, and it did some amazing science.”

The observatory’s radar maps of the moon and Mars, for example, helped NASA pick landing sites for the Apollo (SN: 5/1/65) and Viking missions (SN: 7/17/76). And observations of the asteroid Bennu helped NASA plan its OSIRIS-REx mission to snag a sample from the space rock (SN: 10/21/20). Arecibo views of Saturn’s moon Titan have revealed hydrocarbon lakes on its surface (SN: 10/1/03).

Beyond the solar system, Arecibo has observed mysterious flashes of radio waves from deep space, called fast radio bursts (SN: 2/7/20), and the distribution of galaxies in the universe. Arecibo has also been used for decades in the search for extraterrestrial intelligence (SN: 11/7/92), and it beamed the first radio message to aliens into space in 1974 (SN: 11/23/74).

In the wake of Arecibo’s collapse, the radio astronomy community is “going to have to look at what was going on at Arecibo and figure out how to replace as best we can some of those capabilities with other instruments,” Beasley says.

Here’s some reasons Arecibo Observatory was a big deal.

Here are 10 of Arecibo’s coolest achievements Ice on Mercury, pulsar planets and a greeting to aliens are just some of the radio telescope’s hits

Thanks for the memories