Republicans the Party of QAnon and viciously delusional thinking.

Guess there’s going to be an open vote on Majorie QAnon Greene in the Senate today. We shall see how much trump, delusional thinking and the brainwashing squad at the QAnon still own the Republican Party

There’s a conspiracy theory called Frazzledrip. Even for QAnon types, it’s pretty fringe, which is saying something. Recall that the central belief in Q-world is that there’s a secret cabal of Satan-worshiping, sex-traffickingpedophiles running the government.

Frazzledrip is worse. It is the name of an imagined video of a young girl on Huma Abedin’s laptop in a folder labeled “life insurance.” Abedin, the ex-wife of former Rep. Anthony Weiner, was an aide to Secretary of State Hillary Clinton.

According to Vice, the nonexistent video shows Clinton filleting off the young girl’s face. The two women take turns wearing the girl’s face as a mask to terrify the child so blood is suffused with adrenochrome. They drink her blood as part of a satanic ritual. … 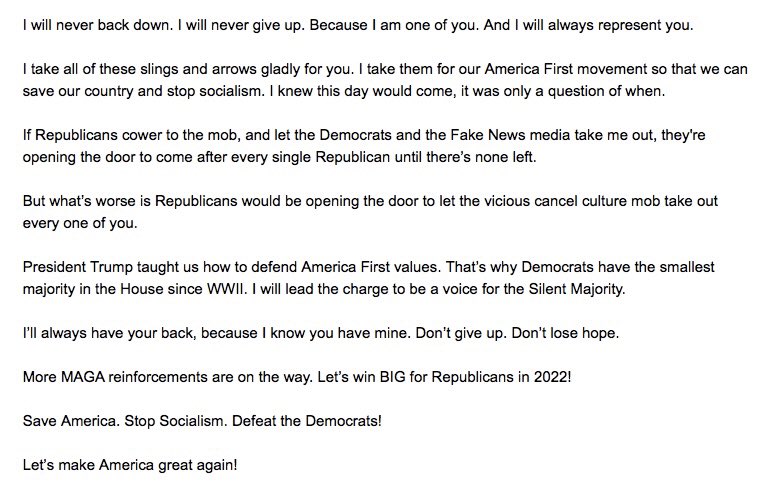 The ugly American Values: Sleep till noon and screw 'em all.

QAnon reshaped Trump’s party and radicalized believers. The Capitol siege may just be the start. The online conspiracy theory, which depicts Trump as a messianic warrior battling ‘deep state’ Satanists, has helped fuel a real-world militant extremism that could haunt the Biden era

The siege on the U.S. Capitol played out as a QAnon fantasy made real: The faithful rose up in their thousands, summoned to Washington by their leader, President Trump. They seized the people’s house as politicians cowered under desks. Hordes wearing T-shirts emblazoned with the “Q” symbol and toting Trump flags closed in to deliver justice, armed with zip-tie handcuffs and rope and guns.

The “#Storm” envisioned on far-right message boards had arrived. And two women who had died in the rampage — both QAnon devotees — had become what some were calling the first martyrs of the cause.
The siege ended with police retaking the Capitol and Trump being rebuked and losing his Twitter account. But the failed insurrection illustrated how the paranoid conspiracy theory QAnon has radicalized Americans, reshaped the Republican Party and gained a forceful grip on right-wing belief. …

What happened to American principles of honesty, Fair Play, respecting others - allowing facts and evidence to make your case.

Katie Porter with bombshell account from Capital Hill insurrection and a mob with murder and vandalism in their hearts, placed there by the monster trump.

How the Trump campaign came to court QAnon, the online conspiracy movement identified by the FBI as a violent threat

The little-noticed exchange — captured in a video posted to YouTube — illustrates how Trump and his campaign have courted and legitimized QAnon adherents.
The viral online movement, which took root on Internet message boards in the fall of 2017 with posts from a self-proclaimed government insider identified as “Q,” has triggered violent acts and occasional criminal cases. Its effects were catalogued last year in an FBI intelligence bulletin listing QAnon among the “anti-government, identity-based, and fringe political conspiracy theories” that “very likely motivate some domestic extremists to commit criminal, sometimes violent activity.”

As the worldview took shape online, its followers flocked to Trump rallies with QAnon apparel and placards. Recently, as the election has drawn closer,actions by the president and his associates have brought them more directly into the fold.
The Trump campaign’s director of press communications, for example, went on a QAnon program and urged listeners to “sign up and attend a Trump Victory Leadership Initiative training.” QAnon iconography has appeared in official campaign advertisements targeting battleground states. And the White House’s director of social media and deputy chief of staff for communications, Dan Scavino, has gone from endorsing praise from QAnon accounts to posting their memes himself.

[QAnon Crowd Super Bummed That JFK Jr. Did Not Appear in Dallas]

Like Al Qaeda. Send them nice chocolates. And grind them in to the dust with legislation.