Not much going on here, so thought I’d post something kind of positive on the religion world.

I’ve been dealing some messes. So I admit I’ve barely skimmed it. Enjoy.

I woke up early and wound up looking at that, scratching my head, then reading through that, then stepped away to let it soak in a little.

First off, I didn’t even know this was a thing.

Robyn Faith Walsh, a professor of New Testament studies at the University of Miami with a Ph.D. in religious studies from Brown University, has recently hit the circuit promoting her “controversial” thesis (building on her dissertation at Brown) that the Gospels are deliberate literary creations, and not happenstance collections of oral lore. I just completed her book on this point, The Origins of Early Christian Literature: Contextualizing the New Testament within Greco-Roman Literary Culture (Cambridge University 2021). And it’s excellent work. Here I’ll summarize its points and merits.

I put the word “controversial” in quotes above because, of course, not just me but many scholars (and the more, the more lately) have been arguing the same thing for many years now. She isn’t alone; and she knows it: her bibliography is full of concurring scholarship. But until now no one has written so comprehensive and persuasive a case for this point than she has. Moreover, as she notes and documents, her position is the norm in all other fields of ancient literature. …

But, I guess that is the obligation of scholarship, no stone unturned.

You should check out Bart Ehrman’s books, but especially this one: 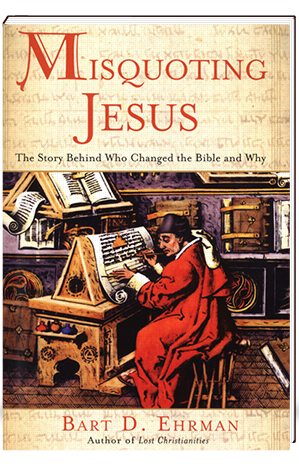 Misquoting Jesus: The Story Behind Who Changed the Bible and Why - Bart D....

My guess is this author you linked to isn’t neutral, but is trying to counter what scholars like Erhman know - that the new testament is a pieced together book.

My guess is this author you linked to isn’t neutral, but is trying to counter what scholars like Erhman know - that the new testament is a pieced together book.

(From your linked article)
The popular perception of the Bible as a divinely perfect book receives scant support from Ehrman, who sees in Holy Writ ample evidence of human fallibility and ecclesiastical politics. Though himself schooled in evangelical literalism, Ehrman has come to regard his earlier faith in the inerrant inspiration of the Bible as misguided, given that the original texts have disappeared and that the extant texts available do not agree with one another. Most of the textual discrepancies, Ehrman acknowledges, matter little, but some do profoundly affect religious doctrine.
To assess how ignorant or theologically manipulative scribes may have changed the biblical text, modern scholars have developed procedures for comparing diverging texts. And in language accessible to nonspecialists, Ehrman explains these procedures and their results. He further explains why textual criticism has frequently sparked intense controversy, especially among scripture-alone Protestants.
In discounting not only the authenticity of existing manuscripts but also the inspiration of the original writers, Ehrman will deeply divide his readers. Although he addresses a popular audience, he undercuts the very religious attitudes that have made the Bible a popular book. Still, this is a useful overview for biblical history collections. Bryce Christensen Copyright © American Library Association. All rights reserved

Erhman has written more books, but he does have a fourteen year head start.

Still Richard Carrier is a noted scholar in his own right.

Books he’s written,
Jesus from Outer Space (JFOS)
On the Historicity of Jesus (OHJ)
Proving History (PH)
Hitler Homer Bible Christ (HHBC)
Sense and Goodness without God (SAG)
Why I Am Not a Christian (WNC)
Science Education in the Early Roman Empire (SEERE)
The Scientist in the Early Roman Empire (SERE)
The Christian Delusion (TCD)
The End of Christianity (TEC)
Christianity Is Not Great (CNG)
Not the Impossible Faith (NIF)
The Empty Tomb (TET)
Resurrection: Faith or Fact? (RES)

I see Ehrman has a few lectures on YouTube, perhaps I’ll have to try listening to one or two, although from my quick overview it seems he’s pretty skeptical of the authorship of the Bible himself. Though I also see Ehrman seems to think enough of Carrier to have locked horns with him.

Ehrmann sticks to the consensus that Jesus was a person. Carrier says his logic is circular, i.e. it’s true because of the consensus. Ehrmann won’t go head to head with him. Too bad, it would be interesting.

Ehrmann sticks to the consensus that Jesus was a person. Carrier says his logic is circular, i.e. it’s true because of the consensus. Ehrmann won’t go head to head with him. Too bad, it would be interesting.

Thanks for the tip, something to be aware of if, when, I manage to listen to a couple of his talks. After all this isn’t my topic, or even much concern to me, guess I’m bored and too discouraged to worry about my pet issues. So, how about that California weather and them atmospheric rivers. What difference a little attentiveness a few decades ago could have achieved. Instead, most people don’t have a clue what hit them or why.

I always think of that cartoon, the one where a guy is laughing off the warm summer, but then with each panel it gets worse, until New York is underwater and he’s still making jokes about how the science is wrong.

I’ve always viewed the Bible as literature. The authors used a lot of literary tools to write the stories and even embellished on the last author’s work, adding their own touch to the story. None of them were eyewitness accounts of the legendary Jesus, though many Xians want to believe they are.

Definitely check out that book I linked to. The gospels aren’t even literature, they’re stitched together fragments and even the so called “authors” aren’t even real people, or at least not the authors. And the fascinating thing is, it’s not that there was any hanky panky going on, just that that’s how things happened way way back. It was not anything considered “wrong” to write something and stick a well known person’s name on it as “the author”. It does kind of make you sad that so many people name their kids after gospel authors who didn’t even exist or write gospels.

No, Matthew, Mark, Luke, and John were not real people. This is true. Still whoever the people were behind the stories embellished on the previous work, adding their own twist and cultural touch.