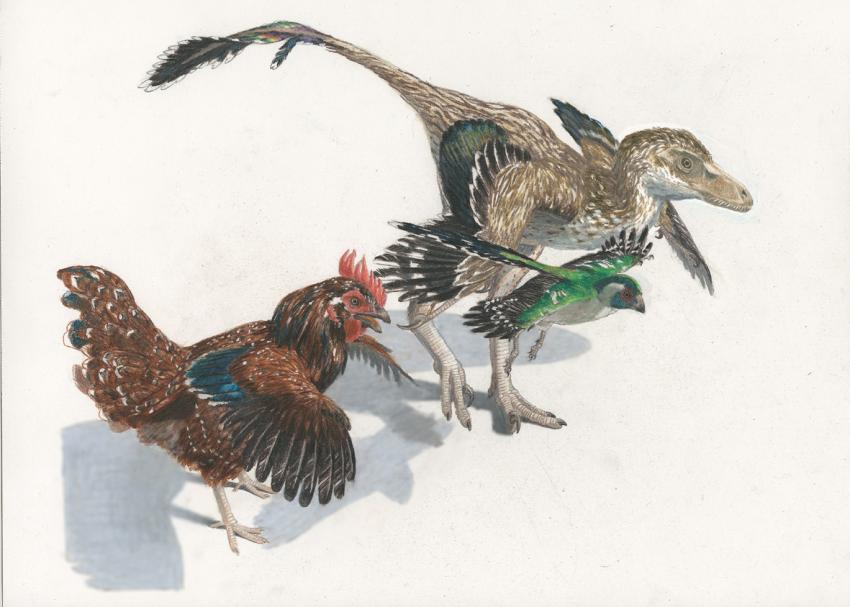 The most comprehensive family tree of meat-eating dinosaurs ever created is enabling scientists to discover key details of how birds evolved from them.

The study has shown that the familiar anatomical features of birds – such as feathers, wings and wishbones – all first evolved piecemeal in their dinosaur ancestors over tens of millions of years.

However, once a fully functioning bird body shape was complete, an evolutionary explosion began, causing a rapid increase in the rate at which birds evolved. This led eventually to the thousands of avian species that we know today…more

Back when I was still in my prime, we lived at a place where we also had a chicken coop, besides a dozen chickens there was a tom turkey. Nice big holding pen, with the smaller room that had the nests and eggs. Part of the rental deal, take care of the chickens, no problem, me thinks.

Holy jaysus, that Tom hated me, but I’d have to go in there and get eggs.

I needed a big stick and we really did have it out a few times. At first I was gentle, nuts on that when Tom seriously wants to rip my eyes out and he’s going for it.

I had to put everything into that stick before I connected enough to get him to backed off. It was a real fight and that dude really wanted to take me down.

I’m mean you’ll never think about dinosaurs the same after a few eye balls to eye balls with a pissed off Tom Turkey.

A few days of that was enough. My wife thought she could do better. She did. We figured out he didn’t mind her and she could get by him just fine, it was me it wanted to kill. Go figure, what you expect with two testosterone loaded Tom Turkey in the same pen. Same as it ever was.

That was the end of my chicken tending days.

But definitely the birth of a whole new appreciation for dinosaurs and birds.

CC, have you ever seen the epic battles between Family Guy and a Giant Rooster? It must be the same deal with you and Tom Turkey.

Write, do you think the dinosaurs ever developed a highly intelligent and social species of dinosaurs? They were around for so long, it seems to me that they quite possibly did. And some birds, these days seem pretty intelligent.

Write, do you think the dinosaurs ever developed a highly intelligent and social species of dinosaurs? They were around for so long, it seems to me that they quite possibly did. And some birds, these days seem pretty intelligent.

Considering that many of the smaller raptors hunted in packs, I would guess they might have been as smart as modern pack hunters.

After all the dinosaurs did not go extinct for lack of ability to procreate. They were wiped out by a cosmic cataclysm that wiped out almost all life on earth, except for those species which could use flight to cover long distances to safety or deep sea dwellers which were safe from the surface disters…

AFAIK, this is also how the insect has been so succesful, they learned to fly millions of years before the first flying dinos, but those are the species that appeared to have survived along with ocean dwellers, where ground bound organisms perished.

I think we can look to octopi and other deep ocean dwellers, obvious survivors of many natural extinction events and see their astounding evolved intelligence. This can only be due to extremely long evolutionary time frames.

Just look at crows and other birds which survived many natural extinction events. All these very old species display extraordinary intelligent behaviors, because they had more time than all other species to evolve very specialized skills and abilities.

I see. The crows are as smart as some apes. They have dependent early developmental periods, as social species tend to have. But their ave total life span is pretty short, I guess.

I agree. And they are able to communicate useful information about their environment, which is beneficial to the entire “murder” and gives all members a survival advantage due to acquired knowledge and memory. Crows appear to remember significant events for as long as 2 years! Elephants even longer.

All individuals or groups which have acquired a range of specific skills (such as tool use) which result in survival advantage may be considered to be intelligent relative to other members of their own species.

"Animal intelligence refers to a group of abilities that enable problem-solving by animals in a given environment. "

a collection of cognitive abilities in animals that are typified by learning, problem solving, and higher-order cognition. Current researchers tend to argue against a phylogenic system and look at the challenges faced by each species, as opposed to comparing each organism to humans.

How about building a lavish home to attract a mate

But their ave total life span is pretty short, I guess.

Don't tell that to the Macaws

Bird with longest life span Large parrots such as macaws live the longest. Macaws generally live up to 50 years but can live up to 100. Cookie, a Major Mitchell's Cockatoo who has resided at Chicago's Brookfield Zoo since 1933 when he was a one-year-old fledgling, is today recognized as the world's longest living bird – he's 77.

I just heard (on NPR) about an experiment. 2 parrots in cages, side by side. In each cage their is an exchange window, in which the parrots have learned to exchange coins for food. There is a small opening between the 2 cages. In one parrot’s cage, the exchange window is closed and locked, but he has plenty of coins. The parrot in the other cage has an open exchange window but no coins.

The giving parrot must be a Christian parrot, obeying Jesus’s order to “Love Thy Neighbor”.

Re: dinosaurs tasting like chicken, I finally got a Popeye’s chicken sandwich and was not murdered in the process. Imagine if Popeye’s had dinosaur sandwiches.

I also like this wonderful example of selfless sharing.

Bonobos - the most humanistic of primates.

Humans kill them for “bush meat”. IMO, that’s tantamount to cannibalism. These are intelligent, caring individuals and tribes.

One the scientists studying this close relative remarked that in a Bonobo camp you can go to sleep secure in the knowledge that no one is going to kill you during the night. I am sure this is due to the fact that the Bonobo society is a Matriarchy, where the oldest female is the Matriarch and with her sisters does not tolerate violence.

This tranquility is not experienced in the common Chimpanzee camps. Their society is a Patriarchy and there is a constant competition for dominance, including murder.

IN PREPARATION FOR Charles Darwin's upcoming 200th birthday, the editors of Nature compiled a selection of especially elegant and enlightening examples of evolution.

They describe it as a resource “for those wishing to spread awareness of evidence for evolution by natural selection.” Given the continuing battles over evolution in America’s public schools — and, for that matter, the Islamic world — such a resource is most welcome.

I agree that humans eating Bonobos is tantamount to cannibalism.

I agree that humans eating Bonobos is tantamount to cannibalism.

HANGING ABOUT IN BORNEO WITH THESE “PEOPLE OF THE FOREST”