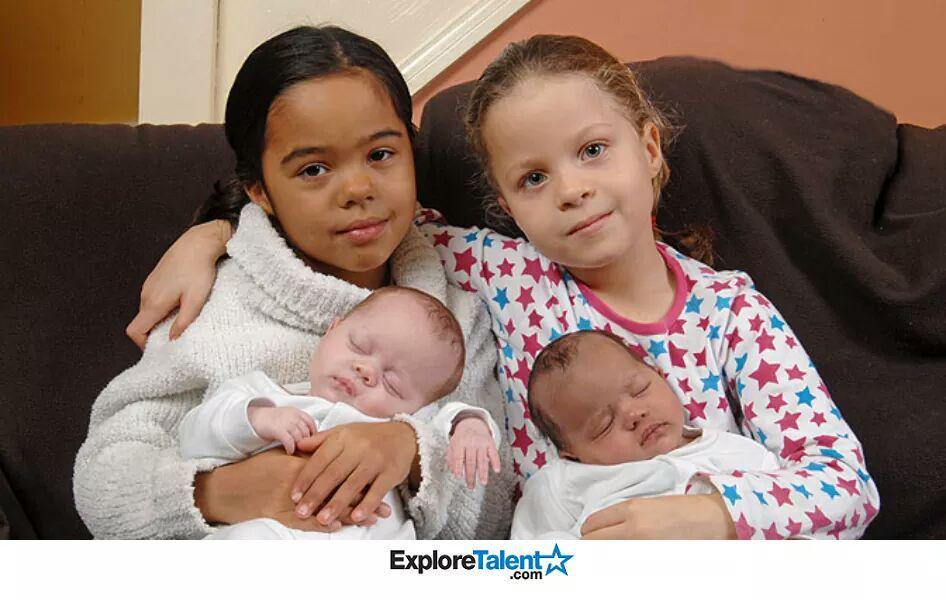 They are obviously not identical, but DNA would reveal the truth. They could be fraternal twins. Identical twins do not have different skin tones and hair texture. Identical twins are clones, two halves of the same fertilized egg. They have exactly the same genetic make up. They can’t wind up looking or being different from one another unless one has been physically injured in some way. Nevertheless they would have identical genes.

IMHO, “race” is a human created word meant to encourage racism. Species, on the other hand, is what distinguishes between humans, cats, dogs, etc. However, there is the human race, but that is the same as saying the human species. There is no races within species though. If there were, we couldn’t sexually relate and procreate- the picture above is an example of human procreation and the human species. Within the species is recessive and dominant genes- the lighter children have mostly recessive genes and the darker children have mostly dominant genes.

Lois right. I missed the identical part, but theoretically, I guess an egg could split with recessive on one half and dominant on the other half, but that is a far fetch theory.

To answer the OP. The 7 years younger ones are the smaller ones.

Lausten, right, and you can tell the older 2 apart, because one is wearing a shirt with stars on it.

Lois, I think the explanation is something about the fertilized egg splitting very early on and something happening en utero that caused the same genes to express differently in some respects. The odds against this happening are apparently great, and even greater that it should happen twice in the same family. I will try to find the link where I saw this and post it, in case I got it wrong.

Ok, I found that I had my links mixed up. It turns out that the 2 sets of twins in the topic photo ARE Fraternal twins. As you can see from this link. However, my memory was not complete bs, as you can see in the previous posted link, that identical twins of different skin color, is indeed possible.

So my topic question stands. What is race?

TimB: So my topic question stands. What is race?

I didn't cheat by looking for an online definition- this is strictly my own definition.

I see race as physical differences. If you can identify a person’s genetic heritage by their looks, you are identifying their race. I am fair-skinned with some freckles and reddish hair, and most people would have little difficulty guessing that my ancestors were Northern European, specifically, Irish.

I’m not sure if Celtic, Caucasian, Anglo-Saxon or some other word is the best label for my race.

The word ‘race’ doesn’t have any negative connotations, it simply describes visible differences that obviously exist. If some people use those differences to prejudge someone, then those people are ignorant fools, but that’s not the word’s fault.

Oh, you were serious. Okay, from memory, the term comes from some an early scientist who was working on classifications. Not sure if he was working on classifying other animals or just homo sapien sapiens. It was coined at a time when we were just becoming aware of our global species. Before that, it was rare for anyone to travel more than 100 miles or so from where they were born. There are still pockets of people who share common DNA that could identify where they are from geographically, but those are rapidly disappearing.

Recently, his work has been considered unscientific, but the term lives on. No doubt this is due to it being used for extremely divisive policies, like slavery or to justify wars and exploitation. Our desire to be tribal is, ironically, universal.

So, it’s whatever you want it to be. You could base it on skin color, hair color, accent, height, hairline, physical skills, cranium size, whatever. It’s used to claim kinship and to identify the “other”.

I’m not sure if Celtic, Caucasian, Anglo-Saxon or some other word is the best label for my race.

That would be your ethnicity. There really is no such thing as race. We are all part of the human species though.

Thanks for the thoughtful replies. I have noticed that dogs, for instance, don’t seem to have a problem with others of their species, simply because of different coloring.

Although birds can be quite discriminating with regards to color in other birds?

Mriana: "That would be your ethnicity. There really is no such thing as race. We are all part of the human species though."

Then, in my mind, 'ethnicity' and 'race' are synonyms.

In everyday conversation I would never use the word ‘race’ because I know some people aren’t fans of it.

3point14rat said, Then, in my mind, ‘ethnicity’ and ‘race’ are synonyms.

They aren’t synonyms either. I took sociology courses years ago and learned there is no such thing as race and that we are all part of the human species. It has nothing to do with being a fan or not being a fan of the word ‘race’ as it is that is an inaccurate word used by people who don’t know any better. People who are educated and chose to use better more appropriate words do so. Those who don’t care or don’t know better, use the inaccurate word, of which there is no such thing, ‘race’.

So we are all identical looking? There are no visible, genetically determined differences that can be used to identify our genetic history?

Race obviously exists, regardless of whether or not the word is twisted by the most ignorant and/or cruel of us to justify saying and doing horrible things. I don’t like the twisting of language to demean or trample the rights of others, but it’s not the words fault, and many people don’t think of it in that way. That said, I mentioned that I never use the word because of the negative way many people see it, so I do avoid using it (if memory serves, I don’t think I’ve ever said it in a conversation in my life). The word ‘ancestry’ is the word I use rather than ‘race’.

I wish to retract my statement that race and ethnicity are synonyms. I didn’t think through the definition of ethnic, and now, after more thought, I see them as quite different. Ethnicity is cultural while race is physical. For example, a person can be born Inuit and raised in Ecuador, thus having the physical characteristics (race) of an Inuit and the culture (ethnicity) of the Ecuadorian family he/she was raised with.

Compare this to how creationists use a tortured definition of ‘theory’ to argue against evolution- the word ‘theory’ still means what it means, regardless of how many people use it incorrectly.

I’m not going to look up the numbers, but difference of my DNA, a mix of European ancestors, and the DNA of someone descended from, say, all African ancestors, is infinitesimal. If there is such a thing as “race”, please define it.

Here is a definition-by-example I used: “For example, a person can be born Inuit and raised in Ecuador, thus having the physical characteristics (race) of an Inuit.…” Is it wrong to be able to identify an Inuit by their physical appearance? I agree that the DNA difference between an Inuit and me is infinitesimal, but both you and I can see it… that is what ‘race’ is. The amount of DNA differences is irrelevant if the differences that exist are expressed in obviously visible ways.

I urge anyone who thinks ‘race’ isn’t a viable word to simply search “race vs ethnicity”. There is no shortage of support for the fact ‘race’ is a word.

I will say again that I don’t use the word in case someone sees it in a negative light, I just never thought that this would be where there was so much resistance.

[Maybe I live a sheltered life and the English language has evolved without my knowledge to where the word ‘race’ is a profanity. If so, I apologize for being rude.]

Okay, so I did the google you said to. I’m not arguing about ‘race’ being a word, that would be silly. I think I made that clear in my original response (not the joke one). And you aren’t arguing about it being a scientific word, so I think we agree there. What I found in my search is that race is associated with biology as opposed to how you were raised or how you dress or your language or your customs. I guess I can’t really argue with that either.

The problems I have, some you’ve already pointed out, that is, how people use it. They take a biological trait and label someone and claim that they can make judgments about a person based on race. I hope we agree that is not true. There may be a few outlier studies, but you can’t look at someone’s DNA or just ask where they were born and make a judgment about their intelligence or capacity to do certain skills. Given that is how the term has been used, I think it’s a good reason to stop using it. If you want to say something about a person’s DNA, just use DNA, or ancestry or something.

And by way of story, that can be abused. An ex-friend of mine made a racist statement and I pointed it out to her. I didn’t call her racist, I told her the statement had a racist tone. She went ballistic and used every “I’m not racist” trope you can think of it. One of them was “I have slave DNA.” She self identified as Italian and had Italian biological traits but had some family history in Georgia. I didn’t bother asking, but I’m pretty sure I can guess where that “slave DNA” came from.

I feel better now. It felt like I was being gaslighted for a while.

Yes, the word has been hijacked to usually mean negative things, and that’s why I don’t ever use the word in conversation. But the question posted was “What IS race”, and I gave my personal definition.

It irks me how the dregs of society can even pollute this place due to their ignorant words and actions. If no one was a racist, all definitions of the word ‘race’ would be equally uncontentious. As it is, we not only can’t use, but fight over it.